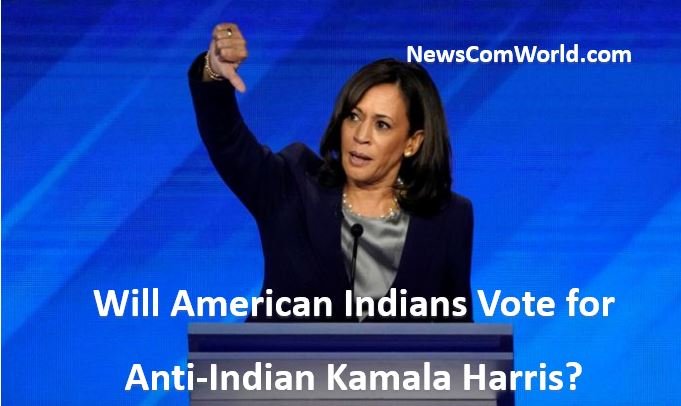 Some American Leftists/Liberal Democrats and HAMAS-linked CAIR’s leaders are pushing the LIE in the US and running this propaganda that Kamala Harris, the newly declared Democrat Vice-Presidential candidate, enjoys support of American Indians that comprise of 5% of the vote share in California. We ran a fact check and wanted to clarify that this is a Fake Propaganda and in fact Nationalist and Patriot American Indians will vote against Kamala Harris because of her Anti-Indian and Pro-Pakistan stand in the past.

Kamala Harris’s Father Donald Harris, a Jamaican married an Indian girl who had gone to the United States in 1957-58 at the age of 19. Her Jamaican father is a Communist Marxist economist who taught at Stanford University. Kamala was born in the United States.

One website writes about her mother, “After doing her graduation in home science in Delhi, she went to America for higher studies in 1957-58. She got her Masters and a Ph.D. Later she became a scientist who worked on breast cancer.” It is surprising to read this text. How can a girl who had done her graduation in home science can go into working on breast cancer treatment? Seems something is goofed up here in records. Anyways that is not material about her mother.

Though Kamala’s mother was an Indian, but all her actions were Anti-Indian and Anti-Hindu. Every Nationalist and Patriot Indian knows the Hypocrisy and Kamala Harris’s hate for India and her stand on Indian Kashmir issue and her support for FATF Grey Listed Terrorist Nation Pakistan.

Renee Lynn who is an activist, an author, a columnist & founder of “Voice for India” and has spent extensive time in India studying Indian culture tweeted about Kamala Harris, “This women @KamalaHarris is the most Anti-India, Anti-Hindu Congresswoman. She is Against CAA, NRC, Ram Mandir, Article 370. Even though she is half Indian she never mentions it, she says she’s a proud black woman. This evil lady is on the level as @PramilaJayapal & @RoKhanna.”

Another Indian handle also tried to clarify that just because Kamala Harris’s mother was an Indian, doesn’t make Kamala Harris to be loved by Indians. Everyone has highlighted the same facts that she hates India.

Maxine Waters said if Joe Biden doesn’t pick an African American there’s no support from African Americans. Hence the selection of Kamala Harris with a Jamaican communist Marxist father was made.

As per an Indian American, 2019 saw India burn in riots by illegal infiltrators from Bangladesh and Rohingya Terrorists from Myanmar in the name of protests against India amending Indian Citizenship amendment act giving Indian citizenship to oppressed religious minorities of Hindus, Christians, Buddhists, Parasis, Jains living in Islamist Radical countries of Pakistan, Bangladesh and Afghanistan where the religious minorities are persecuted. As per some sources, it was George Soros behind the organized riots throughout India that funded the riots. Read our previous article Jihadists Sympathizers Including the Democrats in US are Opposing Relief to Victims of Islamic Jihad

In India George Soros is considered as an enemy of India and Hindus. Kamala Harris has connections with George Soros. One social media user even shared her picture with son of George Soros.

Related Article What is Citizenship Amendment Act (CAA) 2019? Why was it required? Why are Jihadist/Western Pseudo-Intellectuals Opposing it?

As soon as the news of Kamala Harris declared as the Democrat Vice-President Candidate, Leftist Liberal Main Stream Media started their Fake propaganda, as if Kamala Harris candidature was welcomed by Indians and Jamaicans.

An Indian Leftist/Liberal Media that is Anti-Indian and no nationalists or Patriots like that media, NDTV posted an article titled “One Of Our Own.” Indians Cheer Kamala Harris’s Selection As Running Mate

Pakistan that is India’s Arch Rival has forcefully occupied part of Indian Kashmir. Pakistan also gave part of that portion illegally to China. Kamala Harris favors Pakistan on Kashmir Issue. Here is a tweet by an Indian.

Another Indian Sankrant Sanu with twitter handle @sankrant replied to Pramila Jayapal, “Kamala Harris identifies as an African-American Baptist, though she was raised by her Indian Hindu mother. You identify as a Hindu and India hater. Consistently. Not quite sure what you’re proud about.”

Another famous person Amy Mek who is an activist and working on saving the western civiliazation from the onslaught of Pakistani Muslims and have openly spoken against Pakistani Muslim Grooming Gangs in the past and is well versed with Indian-Pakistan arch rivalry tweeted, HAMAS-linked CAIR’s Oregon Leader is pushing the LIE that Indians will vote for Kamala Harris! Hindus Love Trump! Kamala despises Hindus, PM Modi, Attacks India, is against CAA, works with Palestinian Lobbyists and has always hidden her India background Do Not Believe HAMAS.”

Another Indian twitter handle @ramprasad_c tweeted, “Kamala Harris will side with Islamists as her party has already done. Expect her to take an anti-India and an anti-Hindu position on many issues.”

We had seen these kind of Propaganda play in Indian Elections, but can American Politicians also degrade to such an extent that they spread lies to gain a few handful of votes?