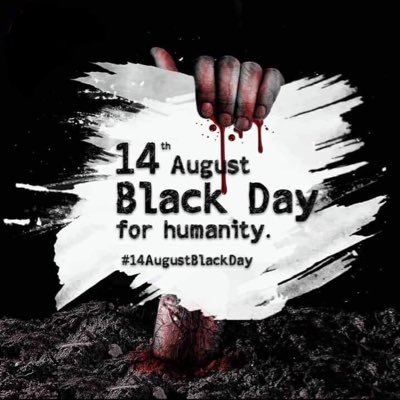 The Muttahida Qaumi Movement (MQM) and Jeay Sindh Thinkers Forum observed Pakistan’s Independence Day, the 14th August as BLACK DAY in many countries. The observance to the BLACK DAY was linked to the unstoppable and ongoing atrocities against all oppressed ethnic entities like Mohajirs, Sindhis, Baloch, Pashtuns, Seraikis, Hazarwals, Gilgitis and Baltistanis living in Pakistan.

The BLACK DAY was observed in the United Kingdom, the United States of America, Canada, South Africa, Australia, Germany and other overseas units and protest rallies were produced. A large number of men, women, children, MQM affiliates and sympathizers and members of the oppressed ethnic communities in these countries actively participated. MQM local and regional leaders led the rallies.

Participants of the rallies held placards and carried black flags on vehicles with slogan ” BLACK DAY” in protest against state atrocities against oppressed nations in Pakistan. At the same time, they were carrying MQM flag, portrait of founder leader Mr Altaf Hussain.

Large crowds in the shape of car rallies gathered outside Pakistani Consulate offices and showed deep concerns over gross human rights violations taking place in Pakistan by the Army and para military forces.

In this regard, a car rally was also carried out in London which started from the International Secretariat of the MQM and went round different parts of London. Black balloons were released outside the International Secretariat on the occasion. The special protest car rally reached the Pakistan High Commission in Central London from different parts of the country and passed in front of it. Along with the tricolour MQM’s flags, there were British national flags and portraits of Quaid-e Tehreek Mr Altaf Hussain.

The participants of the protest car rally chanted slogans in favour of Quaid-e-Tehreek Mr Altaf Hussain and condemned the Pakistan’s military establishment for unprecedented, unstoppable and ongoing atrocities against Mohajirs and other oppressed nations in Pakistan. The special protest car rally was also attended by MQM Acting Convener Tariq Jawaid, members Coordination Committee and MQM UK Organiser Sohail Khanzada and other office bearers.

When the rally arrived back at the International Secretariat of the MQM, MQM UK workers dropped sky lanterns in large numbers into the air amid loud slogans that they continued to chant. Men, women, youngsters and children were also present along with their families on the occasion.

MQM Founder and Leader, philanthropist, historian, politician and statesman Mr Altaf Hussain also addressed the participants of the protest rallies at the International Secretariat and in his address, he paid rich tribute to the protesters and congratulated them for celebrating the BLACK DAY in an unforgettable manner.

Similar car rallies were also carried out in Johannesburg and Cape Town in South Africa. It should be noted that Mohajir and Sindhi freedom fighters are facing a lot of threats from Pakistan Intelligence Agency Inter-Services Intelligence which is abducting and killing the freedom fighters using the local gangs and Islamist radical terrorist groups like Islamic State ISIS. However despite the threats to their lives, Freedom Fighters came out in large numbers to protest against Pakistan’s illegal occupation and oppression in Sindhudesh.

Every participant had only one desire. Desire to get complete freedom from Pakistan and form an independent country Sindhudesh, where Mohajirs and Sindhis can live freely.

Sindhis and Mohajirs also gathered in front of the Pakistani Consulate in Houston, Texas in United States on 14 August for protests. Large number of special protest cars reached the Pakistan Consulate in Houston from different parts of the country and passed in front of it. Along with the tricolour MQM’s flags, there were portraits of Quaid-e- Tehreek Mr. Altaf Hussain. While team from State department Washington DC also came to take pictures and interviews, United States Government arranged good security also because there were threats of attack by Pakistani Intelligence agency ISI supported groups.

There was a lot of enthusiasm among all the participants in the car rally. Everyone had only one desire that the International community should know that Mohajirs and Sindhis want total freedom from Punjabi Pakistan and form a separate country.

Social media was filled with pictures of local Sindhi men, women, children from Sindhudesh carrying placards and banners of 14 August black day. People have given up fear of Pakistan’s retaliation and came out in large numbers and got their pictures clicked holding banners.

Pashtuns also observed Black Day on 14 August. As per Pashtuns, This day is a black day to all of us. This day is the beginning of suffering for all nationalities in Pakistan except Punjabis.

One person commented, “Today is a black day for me, as a Pashtun from Waziristan. I can never forgive the lies, double dealing and terrorism that the Pakistan army has done in the land of Pashtuns.

Some Pashtuns even remembered Barbarra massacre when gun fire was opened on innocent protesters.

Similarly Baloch also observed 14-August as a Black day. At several places, Pakistan and China Flags were burnt and people came out protesting against enforced disappearance of native Baloch people by Pakistan Army.

In last 73 years the freedom movement of Balochistan, Sindhudesh, Pashtunistan never caught the world attention the way it has caught the attention of the International community in last couple of years.

Who is to be credited for this spread of information about freedom movement to the International community? Is it that under Imran Khan government more atrocities are being committed in Balochistan, Sindhudesh, Pashtunistan? Or is it that General Bajwa is showing his incompetence to curb the freedom movement in Balochistan, Sindhudesh and Pashtunistan?

Is it that the freedom movement of Baloch, Mohajirs, Sindhis, Pashtuns, Seraikis and other ethnic groups has reached a boiling point that any major incident of Human Rights Abuse by Pakistan Army can break Pakistan and new nations will be formed soon?