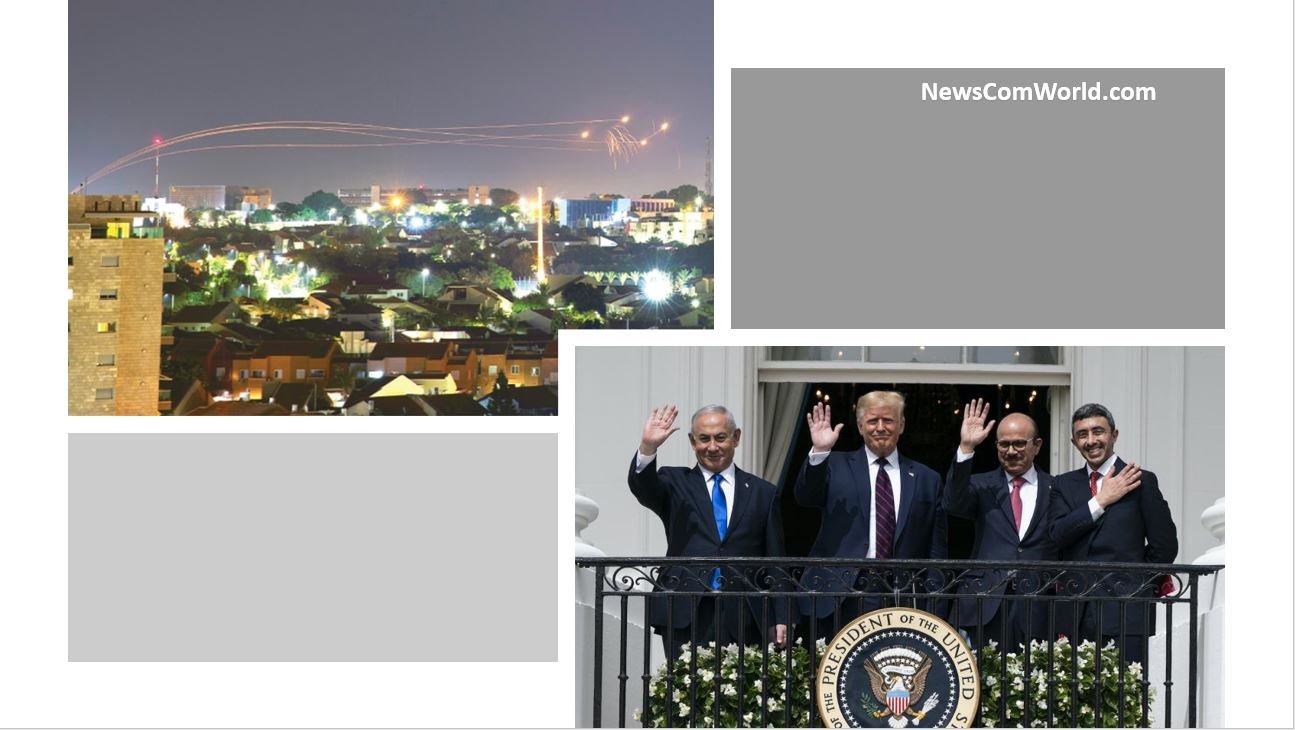 Palestinian terrorists in the Gaza Strip fired 13 rockets into southern Israel before dawn on Wednesday, eight of which were intercepted by the Iron Dome system, the Israel Defense Forces said. The attack apparently came in response to Israel signing peace deals with the United Arab Emirates and Bahrain.

The projectiles were fired over the course of half an hour, prompting the second of two waves of overnight strikes by the Israeli Air Force on Hamas targets across Gaza.

The predawn attacks from the Strip triggered sirens at least five times over a half-hour period — from roughly 4:30 a.m. to 5 a.m. — in the town of Sderot and communities in the Eshkol and Sha’ar Hanegev regions early Wednesday. The IDF said several volleys were fired, totaling 13 rockets. Soldiers operating the Iron Dome missile defense system intercepted eight of the incoming projectiles, the military said.

Despite the overnight rocket attacks, schools opened as usual for students in communities surrounding the Gaza Strip, local officials said.

No Palestinian terror group took responsibility for the rockets, though both Hamas and Palestinian Islamic Jihad put out statements in support of them, indicating they’d at least given their tacit approval for the launches.

Iranian media stressed that rockets were fired at Israel from Gaza during the signing of the peace deals with the UAE and Bahrain. Fars News said that the rocket sirens were heard in Ashkelon and Ashdod “at the same time as Arab, American and Zionists officials gathered at the White House.”

Fars News claims that Israel’s assertions that it intercepted the rockets were “not true” and it showed images of a shop allegedly damaged, “two people were injured.” The Iranian media, which is close to the Islamic Revolutionary Guard Corps, stressed that this rocket fire came during the signing of the agreement with the UAE and Bahrain.

There are reports that Israel will pursue the Terrorists hiding in Gaza Strip.

Peace Accord between Israel, UAE and Bahrain

President Donald Trump facilitated the signing of a pair of historic agreements formalizing diplomatic relations between Israel and two Gulf Arab nations in a ceremony Tuesday on the White House South Lawn.

President Trump presided over a South Lawn ceremony where Prime Minister Benjamin Netanyahu of Israel and the foreign ministers of Bahrain and the United Arab Emirates signed a general declaration of principles the White House has named the Abraham Accords, after the biblical father of three monotheistic religions, as well individual agreements between Israel and the two Arab states.

The accords – written in English, Hebrew and Arabic – marking a major geopolitical shift in the Middle East and giving Trump a platform as peacemaker as he heads into the fall reelection campaign.

“We’re here this afternoon to change the course of history,” Trump said at the beginning of the ceremony. “Together these agreements will serve as the foundation for a comprehensive peace across the entire region.”

“Together these agreements will serve as the foundation for a comprehensive peace across the entire region, something which nobody thought was possible, certainly not in this day and age,” Trump said. “These agreements prove that the nations of the region are breaking free from failed approaches of the past. Today’s signing sets history on a new course and there will be other countries very very soon that will follow these great leaders.”

Netanyahu called the agreements “a pivot of history” that “heralds a new dawn of peace.” The foreign ministers from Bahrain and the UAE were equally sweeping in their praise for the pacts.

The texts of the agreements detail how the three countries will open embassies and establish other new diplomatic and economic ties, including tourism, technology and energy. Israel and the Emirates are beginning commercial air travel between their countries for the first time, and Bahrain has opened its airspace for those flights.

In late-2015, Israel opened a diplomatic-level mission to the International Renewable Energy Agency in Abu Dhabi. In 2018, then-culture minister Miri Regev made a state visit to the Grand Mosque on the heels of an Israeli gold medal at a judo tournament in the Emirates. Israel was also invited to Expo 2020 Dubai, a world expo that has since been delayed by the coronavirus pandemic.

Bahrain has a small but sustained Jewish community, with one of its members serving as the country’s ambassador to the United States from 2008-2013. The small Gulf kingdom also hosted the unveiling of the economic portion of the White House’s plan for Middle East peace, signaling a willingness to engage with the US — and subsequently Israel — on the issue, even at a time when no progress on the Israeli-Palestinian conflict appears possible.

UAE and Bahrain are also close allies of the US, with each country hosting a significant US military presence. The US Air Force has deployed F-35 fighter jets to an air base in Abu Dhabi, while the Navy’s Fifth Fleet and Central Command are based in Bahrain. That military presence has drawn the leaders of the UAE and Bahrain closer to the US, and because of the anti-Iran alliance, closer to Israel.

All eyes will be on whether other countries in the region follow suit, above all Saudi Arabia. President Trump even suggested five other Arab states were “far down the road” towards finalising similar arrangements.