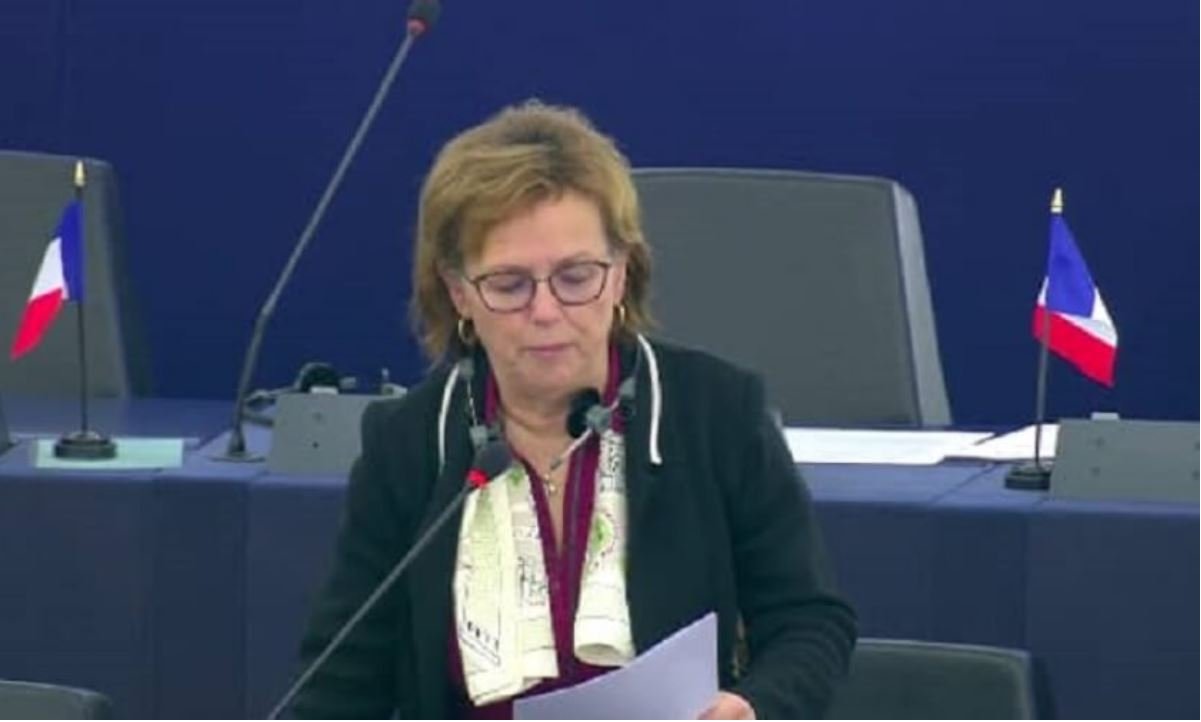 France MEP Dominique Bilde during a session declares Pakistan a serious security threats for sale of European Union passports and VISAs to Criminals.

European Parliament Member, Dominique Bilde has declared that Pakistan is a crucial player regarding ‘serious security threats’ through the sale of European Union passports as well as visas to persons which are included in criminal activities.

Her statement came during a session, on Thursday, in which she stressed that she considers Pakistan as the leaders of fake passports and fake documents, SchengenVisaInfo.com reports.

She also tweeted a video and the text in French.

“Should we be surprised about the Cypriot golden visas because the false accusation of passports or residence is only of use for nefarious means?. We have seen, Pakistan is the leader in fake passports and fake documents. They have received over 4 billion euros in aid since 2014. We deplore the impacts. We are supporting certain states and those who are supporting Islamist terrorism,” Bilde pointed out.

Her comments follow a recent attack, which happened in Paris, on September 35, where two persons were killed outside Charlie Hebdo’s former offices. Media in Paris reported that the terrorist was a citizen of Pakistan who entered France illegally and acquired citizenship-by-falsifying his documents.

Other members of the European Parliament such as, Fulvio Martusciello, Ryszard Czarnecki and Gianna Garcia expressed their shared concerns in this regard in a letter that was later sent to the French government and the European Union, in order to impose sanctions against unabated terrorist activities in Pakistan.

“This October 22, we call on the French government and the European Union to introduce sanctions against the unabated terrorist activities emanating from the Islamic Republic of Pakistan. France, Europe, and the world, cannot afford the murder of any additional innocent victims nor should it live in fear from the threats of terrorism,” the letter reads.

In the letter, it was also highlighted by the Parliament members that since August 14, 1947, when it was created, West Pakistan, which is also known as the Islamic Republic of Pakistan “has incited untold horrors of the world.”

The so-called Citizenship by investment scheme, which is operated by some of the European Union Member States, is often criticized for being sold to persons included in illegal activities; therefore European Union Commission continuously calls on countries that run such schemes to put them to an end.

Through the Golden Visa Scheme, internationals buy Citizenship in European countries that run such a scheme, providing that they invest in the country.

According to the CEO of Lalani and Associates, Sikander Lalani, nearly 200 Pakistani families are availing this kind of possibility each year.

Arton Capital, a global citizenship financial advisory service company, points out that in 2014, Pakistan was among the three countries that accounted for 40 per cent of the total number of applications.

Figures revealed by Statista, a German company specializing in market and consumer data, show that in 2016 there were more than 20,600 Pakistani immigrants living in France. In contrast, the Ministry of Overseas Pakistanis previously announced that there were estimated more than 104,000 citizens of Pakistan living in France in 2017.

Pakistan’s intelligence agency, ISI, has been using the services of Pakistani crime syndicates operating in several countries, including France

Pakistan’s intelligence agency, ISI, has been using the services of Pakistani crime syndicates operating in several countries, including France and Thailand, to further its agenda, according to a report in the Global Watch Analysis.

Recently, Thailand Police arrested a Pakistan national named Baqar Shah for his involvement in multiple illegal activities in the country including money laundering for the ISI.

He was first noticed by Thai authorities due to his involvement in organising an anti-American protest outside the US Consulate in Chiang Mai in September 2012. In February 2016, his name again surfaced when Thailand Police busted a major fake passport syndicate in the country and an Iranian national, Hamid Reza Jafary, and five Pakistanis were arrested.

The six of them were found to be involved in the supply of fake travel documents and human trafficking. It is to be noted that Jafary was on the wanted list of security agencies in several countries including the UK, France, Australia and New Zealand.

According to investigations, Jafary and his five Pakistani contacts were supplying forged passports that were being sold to people from Gulf countries for travel to Australia and Europe. During the probe, it was found that Gohar Zaman, one of the five Pakistanis in custody, had close links to Shah.

As the Thai security agency put Shah under close surveillance, they discovered that he maintained regular contact with officials from Pakistan Embassy in Bangkok and his restaurant was being used as a meeting point for Pakistani officials.

“Shah’s main job appeared to be spotting potential assets for Pakistanis in the local police, immigration, customs and airlines and to develop contacts within the Muslim community in Chaing Mai and Mae Sot region,” according to the report.

Shah was blacklisted by the Thai immigration for five years and deported to Pakistan in 2018. However, he managed to sneak back into Thailand under the guise of ISI mentors on a fresh passport in the name of Syed Baqar Ahmed Jaffri. However, Thailand Police tracked him down again and he is currently in custody.

A similar syndicate, pertaining to the supply of forged passports, is reported to be operational in France. A person with the initials B.H., who is controlling the syndicate, is believed to have connections at the Pakistani Embassy in Paris.

A Pakistani restaurant situated near Gare du Nord, the office of a welfare association in La Courneuve area and a travel agency in the 10th arrondissement in the Paris, are used as fronts to run the illegal activities of supplying Pakistani passports and resident permits of European countries including Portugal, Belgium and France.

The price for these identity cards and travel documents range between 850 to 1,500 Euros.

During investigations by the Global Watch Analysis, for instance, copies of fake travel documents held by a person linked to this network were found. The individual, who is based in France, has several British and Pakistani passports, all under different names.

Sources said the multiple passports would have enabled the person to hold several bank accounts and credit cards with French banks.

It is well known that ISI has links with several terror groups of “jihadist tendency”. “It is not excluded that these type of criminal networks, manipulated by ISI’s branches in the Western capitals, may provide their ‘services’ to members of the terrorist groups in question infiltrated in the West,” the article concluded.

Will France take the first steps of rounding up all Pakistanis and deport them in order to neutralize this national security threat?

Will other members of European Union also follow the suit and deport all Pakistanis from their respective countries?

UK that is infested with Pakistani Muslim Grooming Gangs who rape 8-12 years of their daughters is still accused of Racism despite the fact that the maximum number of convicts are Pakistanis. Would Pakistan be allowed to use the shield of Racism or Islamophobia or will Pakistan be exposed by all the European Union Countries and boycotted?

How long European Countries will continue to provide economic aid, free trade to Terrorist Nation Pakistan that has contributed nothing to Europe other than infiltrating the Islamist Radicals into different European Countries?

This can be called height of patience that Europe has done nothing till now while Pakistan is rewarded with economic aid and for sending Islamist Radicals and Criminals who form Grooming Gangs and rape young girls, behead Europeans, kill in the name of their religion