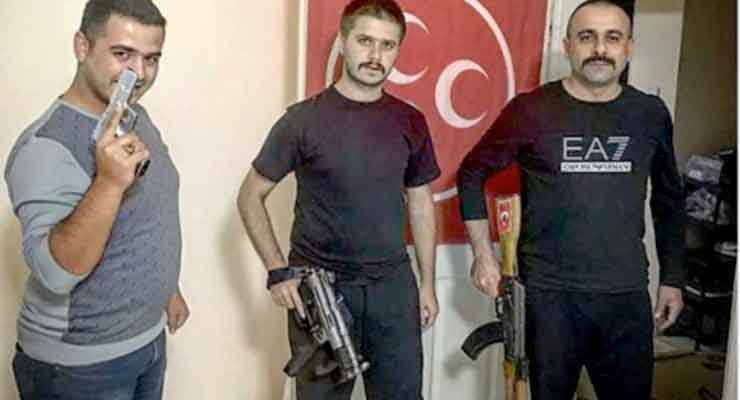 The group “deserves to be dissolved, meaning the directors can no longer meet, claim to meet, or take action on their behalf, or if they do so they can be fined,” Darmanin told lawmakers during a hearing.

Darmanin said he would formally propose the group’s dissolution on Wednesday during the weekly Council of ministers.

In one incident last weekend, France 3 television reported that the Armenian memorial near Lyon was tagged with pro-Turkish slogans and inscriptions with the Grey Wolves name. The announcement comes after a memorial to the Armenian genocide was defaced in Décines-Charpieu, near Lyon, this weekend with slogans including “Grey Wolves” and “RTE,” Erdoğan’s initials. The Grey Wolves were also linked to marches last week during which Turkish ultranationalist chanted threats against Armenians.

Turkey denies that the mass murder and expulsion of as many as 1.5 million Ottoman Armenians in 1915 constitutes genocide. Ankara is also a staunch ally of Armenia’s neighbor Azerbaijan, and has thrown its support behind Baku in the recent fighting over the disputed Nagorno-Karabakh region.

The Grey Wolves, formally known as the Idealist Hearths, are a far-right organization with a long history of violence against minorities and leftists in Turkey. It’s also active in countries with large Turkish minorities.

In Turkey, the Grey Wolves are closely linked to the Nationalist Movement Party (MHP) of Devlet Bahceli that had a political alliance with Justice and Development Party (AKP) of Erdogan whose hold on power partially hinges on the support of the ultranationalist party and its voters.

Darmanin’s announcement is likely to add to tensions between France and Turkey, which have surged in recent months.

Already at odds over issues ranging from the civil war in Libya to energy resources in the Eastern Mediterranean, ties between the two countries deteriorated sharply in the aftermath of the murder of Samuel Paty, a French teacher beheaded after showing his class caricatures of the Prophet Muhammad, and President Emmanuel Macron’s remarks on countering Islamist extremism in France.

Erdoğan reacted by questioning Macron’s mental health and called for a boycott of French products, triggering a backlash from European leaders.

Some European countries have taken action against the Grey Wolves, though no other EU member has banned it. In Austria, the Grey Wolves’ salute was banned in 2019; in Germany, the domestic security agency has labeled the group as far-right extremist.

Established by Colonel Alparslan Türkeş in the late 1960s, Grey Wolves rose to prominence during the late 1970s political violence in Turkey when its members engaged in urban guerrilla warfare with left-wing activists and militants. Scholars have described it as a death squad, responsible for most of the violence and killings in this period. Their most notorious attack, which killed over 100 Alevis, took place in Maraş in December 1978. They are also alleged to have been behind the Taksim Square massacre on May Day, 1977. The masterminds behind the Pope John Paul II assassination attempt in 1981.

Up to thousands of its members fought in the Nagorno-Karabakh War on the Azerbaijani side, and the First and Second Chechen Wars on the Chechen side. After an unsuccessful attempt to seize power in Azerbaijan in 1995, they were banned in that country. In 2005, Kazakhstan also banned the organization, classifying it as a terrorist group.

In Austria, the Grey Wolves salute as well as its symbols were legally banned starting from March 1, 2019. It is punishable by fines up to €4,000.

In May 1984 Grey Wolves leader Abdullah Çatlı carried out a bombing of an Armenian Genocide memorial in Alfortville, a Paris suburb.

Grey Wolves are the largest far-right organization in Germany by membership. A 2017 article published by the Federal Agency for Civic Education estimated over 18,000 members. Its members have actively engaged in attacks on and clashes with Kurds in Germany.

On September 13, 2015 an explosion occurred at a Kurdish civil center in Stockholm, Sweden, following clashes between Turks, Kurds and anti-fascists at a rally organised by the Swedish Grey Wolves.

Grey Wolves members and leaders have been involved in international drug trafficking since the 1980s. In the early 1980s U.S. anti-terrorism officials at the State Department reported that Türkeş is “widely believed to have been involved” in moving heroin from Turkey into Western Europe. According Stephen E. Ambrose, the leaders of Grey Wolves had built in the late 1980s an army by trading drugs for military equipment, ranging from assault helicopters to tanks.

According to a 2014 estimate, the Grey Wolves are supported by 3.6% of the Turkish electorate. Its members are often involved in attacks and clashes with Kurdish and leftist activists. The organization is also active in the Turkish-controlled portion of Cyprus and has affiliated branches in several Western European countries with significant Turkish communities, such as Belgium, the Netherlands, and Germany. They are the largest right-wing extremist organization in Germany.

The Grey Wolves adhere to an extreme form of Turkish nationalism. It has been characterized as neo-fascist by scholars, mainstream media, and left-wing sources. The organization’s ideology emphasizes the early history of the Turkic states in Central Asia and blends it with Islam. Synthesis of Turkish identity and Islam is widely prevalent in their rhetoric and activities. One of their mottos is “Your doctor will be a Turk and your medicine will be Islam.”

Their ideology is based on a “superiority” of the Turkish “race” and the Turkish nation. According to Peters, they strive for an “ideal” Turkish nation, which they define as “Sunni-Islamic and mono-ethnic: only inhabited by ‘true’ Turks.”

Instead of Banning, why does European Nations deport all Turkish Nationals back to Turkey? Why is it so hard to protect the culture of Freedom in Europe for European Nations?

Is Europe so helpless that they cannot do anything or take any action against Turkey that is constantly pushing Islamist Radical Terrorists into Europe and holding EU at ransom?

Does it not raise the questions on the authority of European Union Council and European Parliament Leadership to deal with Turkey?