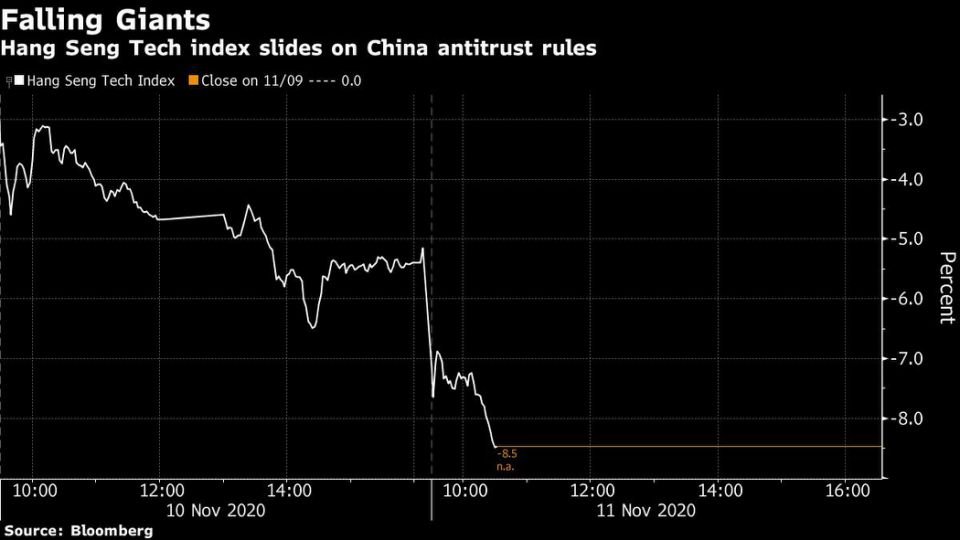 Chinese technology giants from Alibaba Group Holding Ltd. to Tencent Holdings Ltd shed almost $260 billion of market value over two days of frantic selling, as investors scrambled to assess the fallout from Beijing’s broadest attempt to rein in its most powerful private-sector firms.

Technology shares tumbled for a second day after Beijing issued regulations designed to curb the growing influence of internet-sector leaders including JD.com Inc., Meituan and Xiaomi Corp. The Hang Seng Tech Index slumped 5.6% on Wednesday in Hong Kong, taking its two-day loss to 10% as of midday. Shares in the quintet of firms have sunk at least 8% over two sessions.

Beijing on Tuesday unveiled regulations to root out monopolistic practices in the internet industry, pivoting away from a mostly hands-off approach while dealing a blow to businesses at the heart of the world’s No. 2 economy. The vaguely worded edict landed a week after new restrictions on finance triggered the shock suspension of Ant Group Co.’s $35 billion initial public offering, scuppering founder Jack Ma’s ambitions to dominate online finance in the process. They also emerged on the eve of Singles’ Day, the event Ma invented a decade ago that’s evolved into the nation’s largest annual shopping spree.

”China’s Big Tech will have to rethink their business models,” said Zhan Hao, a managing partner with Beijing-based Anjie Law Firm. “The philosophy of internet companies is winner-takes-all, and especially for platform operators, they garner user traffic and build up ecosystems that are similar to each other.”

Xi Jinping’s government is increasingly curtailing the influence of the private corporations that’ve become the country’s main driver of growth. Despite sporadic crackdowns on narrow spheres from mobile gaming to online counterfeits, the likes of Alibaba and Tencent have mostly been free to acquire and invest in new businesses, becoming key backers of prominent startups while building sprawling empires that now span e-commerce, digital finance, social media and entertainment.

“I literally gasped when I first read these guidelines,” said John Dong, securities attorney at Joint-Win Partners in Shanghai. “The timing — on the eve of Singles’ Day — the forcefulness and the resolve to remake the tech giants is startling.”

China’s antitrust watchdog is seeking feedback on rules that establish a framework for curbing anti-competitive behavior such as colluding on sharing sensitive consumer data, alliances that squeeze out smaller rivals and subsidizing services at below cost to eliminate competitors. They may also require companies that operate a so-called Variable Interest Entity — a vehicle through which virtually every major Chinese internet company attracts foreign investment and lists overseas — to apply for specific operating approval.

“Internet giants have expanded their reach into various sectors like finance and health care that are vital to the economy and that really concerns regulators,” said Shen Meng, director of Beijing-based boutique investment bank Chanson & Co. “The move could discourage firms in the tech sector to list in the near term as those impacted will need time to adjust their businesses accordingly.”

On Nov. 3, policy makers shocked the investment world by suspending an initial public offering by Ant Group, a fintech company controlled by billionaire Ma. The decision came just two days before its shares were set to trade in a listing that attracted at least $3 trillion of orders from individual investors. China’s top banking watchdog then doubled down on the push to rein in financial technology companies, promising Wednesday to eliminate monopolistic practices and strengthen risk controls.

That came on top of a series of regulatory pronouncements this week targeted at the tech industry. The new regulations for the internet sector signal a “further tightening” of the online economy, although the real impact will depend on how the rules are enforced, JPMorgan Chase & Co. analysts led by Alex Yao wrote in a note.

The proposed regulations come at a bad time for tech shares, which are already under pressure from a global rotation that has sent the Nasdaq Composite Index almost 3% lower this week.

“Beijing’s tightening regulations, including the antitrust laws, is a heavy blow to the technology giants,” said Daniel So, Hong Kong-based strategist at CMB International Securities Ltd. “It’s an additional blow to the shares, when investors are rotating out of the sector into old-economy shares because of the vaccine boost,” he said, adding that firms such as Tencent and Alibaba will continue to face downside pressure.