Protests Against Communist Govt in Nepal : People Want Monarchy Back 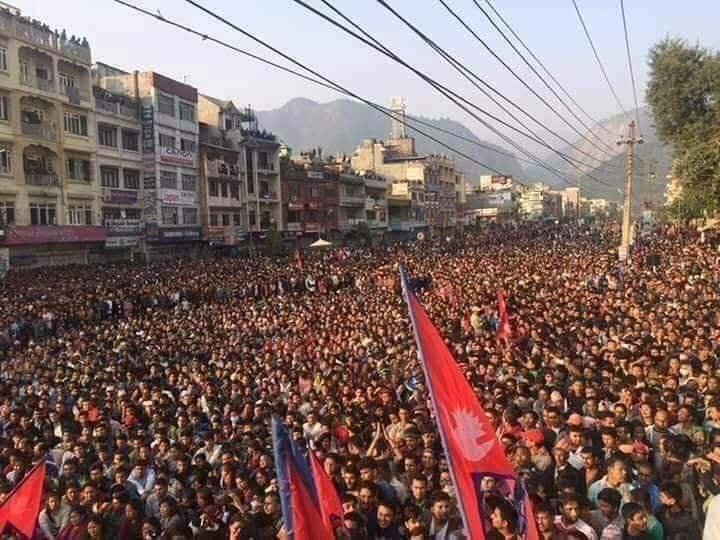 Demonstration and Protests Against Communist Government were held in Nepal’s capital Kathmandu, demanding restoration of monarchy in the country. Similar to Thailand, people in Nepal want their Hindu Monarchy back.

The massive rally on Saturday witnessed public chanting slogans in favor of the Hindu monarchy and the demand for reinstatement of constitutional monarchy in the Himalayan Nation.

The participants of Saturday’s massive rally Opposing Prime Minister KP Sharma Oli’s China supported Communist government, chanted slogans in favor of the Hindu monarchy and demanded the reinstatement of constitutional monarchy in the Himalayan Nation which they claimed was for the sake of country’s national unity and well-being of the people.

Slogans such as “King, please come back and save the country,” were also raised.

“Today, participants are here without being driven by any impulsive feelings, as the movement led by youths has already set off. We can dream of our beautiful Nepal and this nation would obviously get back its monarch status of a Hindu-state. Until and unless we achieve our aim we would fight for it,” Amir KC, one of the participants in the march who claimed to be leading over 250 youths from Lalitpur to the venue told ANI.

The ruling Communist Party of Nepal lead by K P Oli which has supported China and has got good relationship with China, has been unpopular lately because it is embroiled in infighting and corruption and has failed to control the COVID-19 pandemic. The Ministry of Home Affairs in Nepal, meanwhile, had issued directives to 77 districts to quell the current spate of protests, through force if needed.

Protestors on Saturday displayed placards bearing a photo of Prithivi Narayan Shah, the founding father of modern Nepal along with national flags while they chanted slogans against the Federal Democratic Republican System that Nepal adopted in 2008 after the abolition of 240-year-old monarchy. Nepal has transitioned into a federal democratic republic after the promulgation of a new constitution in 2015. First General Election of 2017 held after promulgation charter gave a clear mandate to an alliance of the then CPN-UML and CPN (Maoist Center) incumbent Nepal Communist Party (NCP) which is now in power.

Nepali Communist Prime Minister KP Oli has come under severe criticism in near past because of other reasons also.

Guru Machhindranath’s procession has been celebrated with grandeur every year since last 1000 years. The people of Patan believe that the impact of the pilgrimage will ease any difficult situation. As the king of Bhaktapur and the guru of Kathmandu helped to bring Machhindranath to the valley, the people of Bhaktapur and Kathmandu also come and pull the chariot during the chariot journey.

However Nepalese Communist Government denied celebration of 1000 years old festival on the pretext that the large gathering may spread Chinese Corona Virus.

Police in Nepal used tear gas and water cannon to break up a religious rally that defied a government ban on public gatherings imposed to stop the flow of the coronavirus.

Point we are trying to make here is that when the protests are in favor of China or Communist Government of Nepal, it is ok to allow large gatherings on the streets. However when it comes to celebrating a 1000 years old Hindu Festival, Communist Nepal on the lines of Communist China cracks down on the Hindus to prevent them from celebrating their religious festival.

It was understood that King Birendra decided on the ‘continuation of the Hindu state, the Hindu king and a ban on cow slaughter’ when Nepal’s constitution was amended in 1990 on the advice of Avaidyanath.

Avaidyanath counselled many members of the royal family and was never fully convinced that Birendra and his family members were assassinated by the king’s son. Avaidyanath was succeeded by Adityanath in 2014 as the head of the Mutt.

However since the assassination of Nepal’s Hindu King Birendra under a Communist Conspiracy, Nepal has gone down and doing everything possible to destroy Hinduism and Hindu Beliefs on lines of what China is doing with Buddhists, Uyghurs, Christians and Hindus in China.

Communist Party of Nepal is playing divide and rule. On one hand they appease Muslims and on the other hand they do everything to hurt Hindu’s religious sentiments. When it comes to religious gatherings of Muslims, there is never a fuss. But when it comes to destroying the Hindu religion, Communist Nepal on lines of Communist China is at the forefront.

China has been continuously encroaching upon the Nepalese villages claiming up to be belonging to China and building structure in Nepalese territory. There has been a lot of public anger against the Communist Nepali Prime Minister KP Oli. Recently China went ahead and showed Mount Everest, the highest Mountain peak in the Himalayas belonging to China. It also generated a lot of public anger.

In order to divert the Nepalese Hindu public attention from the Chinese aggression and the Nepalese Communist Party surrendering Mt. Everest to China, a fictitious Disputes over a 40 KM land with India was raised to hype pubic opinion against India and divert public anger to India instead of China. We covered it in our previous article Nepal Surrenders Mt Everest to China And Disputes 40 KM Land With India.

Many people we discussed said that it is because of the Communist Government in Nepal which is funded and financed by Communist Party of China and acting as a puppet of the Chinese Communists, is trying the diversion tactics. On the one hand Communist Nepalese Govt is gifting entire Mt. Everest to China, while on the other hand blowing things out of proportion for a track of 40 Square Kilometres.

As per people, the Only Hindu Kingdom is slowly becoming a communist and Islamist Radicals are also slowly spreading their tentacles all over Nepal. The ancient Hindu Kingdom that had the Ancient Pashupatinath Temple at the core of Relations between India and Nepal, the Communists are killing all the Hindu ideologies that depended on faith and Ancient Hindu culture.

As per people, Chinese Communists may try any political gimmicks. However, the faith of Nepalese people on the Supreme Lord Pashupatinath is unshakable, no matter how hard the soulless Chinese try.

Whatever the issues between India and Nepal, it never affected the relations. The open borders Nepal has with India and the heavy integration of Nepalese and Indian economy and culture is but a proof of that. The importance of temple towns like Pashupatinath and Janakpur and the combination of Kapilavastu and Bodh Gaya are but a proof of the common heritage.

Moreover the Nepalese Communist Party is spreading poison among the Nepali Hindu Kingdom against India by blaming India for spreading the Chinese Virus ignoring the fact that Nepal had direct connects with China, Pakistan and Malaysia that were the biggest source of Infection in the land locked country. Moreover the porus border and daily border crossing by lakhs of Nepalese for work/business in India infected many Indians in the border towns of India.

In our previous article Anti-Hindu Riots in New Delhi were Planned in Nepal. , we mentioned about Nepal “Muslim Aalmi Tablighi Ijtema” 2020 held between 15 to 17 February 2020 in Saptari District of Nepal. Anti-Hindu Riots in New Delhi during President Trump Visit were Planned in Nepal during this religious congregation. Around 5 lakh Muslims gathered in this Ijtema, mostly from UP and Delhi. This event was inaugurated by Hazrat Maulana Shah who is from Delhi.

Over 5 Lakh Aalmi Ijtema gathered between 15th – 17th February 2020 in Bodebarsain, Saptari for a three-day Islamic congregation, Aalmi Tablighi Ijtima, in Nepal. Satari is a small city in Nepal Bordering Indian State of Bihar and is very close to Kishan Ganj Area known as Chicken Neck Area. This Religious Congregation which was supposed to be for Muslims of India and Nepal was attended by Sunni Muslim participants even from countries such as Pakistan, Saudi Arabia, Malaysia, Kuwait, Qatar and Bangladesh.

We all know that by January-February 2020, Chinese Wuhan Corona Virus had spread in Malaysia and infected people from Malaysia also attended this “Muslim Aalmi Tablighi Ijtema” 2020 congregation.

Nepalese Communist Government instead of handling the Radicals in Nepal spreading the Chinese Virus among the Hindu population, continued to spit venom against India and shamelessly blamed India for their own failure and incompetence.

Since the people of Nepal want to overthrow China supported Communist Party of Nepal and want to restore Hindu Monarchy, will the International community help people of Nepal to fulfil their demands?

Communism is spreading its venom all over the world. Isn’t this a good opportunity to crush the hood of venomous snake called communism in the Himalayan country of Nepal and help restore Constitutional Monarchy?

Since the Protests in Nepal are democratic, will the Leftist/Liberal Media and the Leftist Ecosystem recognize the right of people to protest and demand a change in the Constitutional setup and bring back Monarchy?

Or is it that the Hindu phobic Leftist/Liberal ecosystem will be silent when it comes to speaking against the China supported Communist regime in Nepal?