The Mystery of COVID-19 in India : Lock Down And Due Diligence Of Indian Government Prevented the Catastrophe 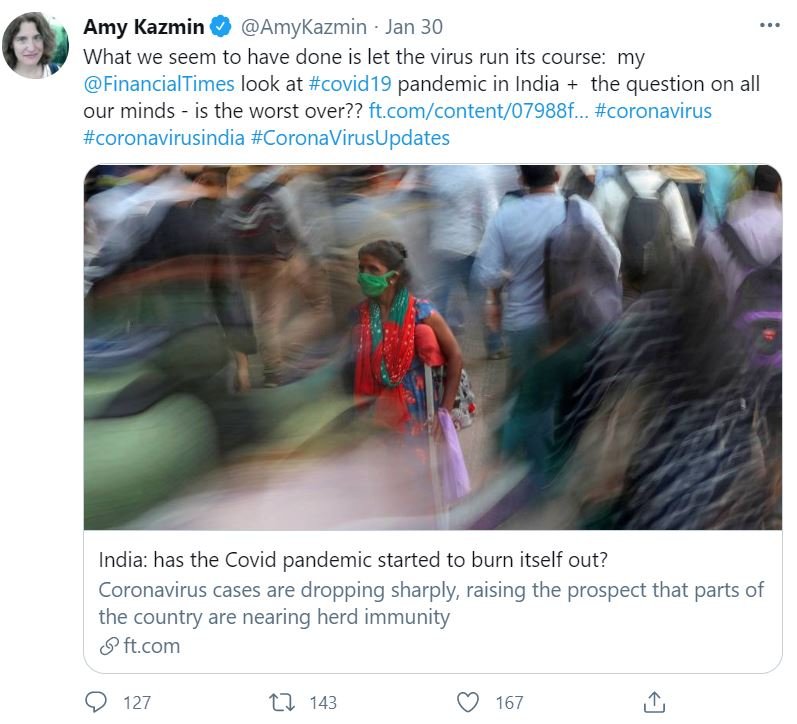 The mystery of COVID-19 in India, this article besides the Lock Down and the due diligence of Indian Government also shed light on the unique Indian culture that Prevented the Catastrophe.

This morning I came across @AmyKazmin ‘s article titled”India: has the Covid pandemic started to burn itself out?” and the corresponding tweets. She said it’s a “Mystery”. She and I gotten off on the wrong foot, where I came across as a rude troll perhaps.

But then, we have seen our fair share of half and ill researched articles thrown at us. It sonly during recent years the guys like me rebut, which is making certain section of the journalists uncomfortable. Hence, they have started raising smear campaigns “India is seeing the rise of the intolerant right-wing Indians”.

Unfortunately, I responded to Amy the same way I respond to certain Indian journalists who have lost their credibility by indulging in multi-billion dollar 2G spectrum scams.

Hence my attempt to make it right.  I would like to begin with an apology to Amy. Let us do it the proper factual way? I am a trained scientist and I know how to interpret data properly.

Dear Amy, there is no mystery here if you look at the statistics with a uniform benchmark. This thread/article is not in the support of govt but in the support of frontline workers who risked everything for keeping rest of us safe. Since your article already has some serious and not so serious inaccuracies, I found it offensive and insulting to the frontline health workers of India. Therefore, I am doing this for them and for my love of Science. I know am not going to impress any woman with this kind of analysis, well it is not for impressing anyone.

Let’s look at the death rate of India for the past three years, it was marked at 0.5% increase in 2019. Then 0.49% increase in 2020 & finally 0.48% increase in 2021. So, there is no huge surge of deaths in India.  The resource for this statistic can be found here https://www.macrotrends.net/countries/IND/india/death-rate

Now let us compare it with US where there are very high number of deaths due to COVID-19. If you observe US had a higher death rate & death growth rate compared to India even during the previous years. However, there still is no dramatic jump in the death rate of the citizens of the United states. https://www.macrotrends.net/countries/USA/united-states/death-rate

Testing rate of these countries?

Random relevant fact-II: Cancer deaths in India would account for ~ 3,95,400 in 2020 as per WHO report. That’s atleast ~2 times the COVID deaths.  The facts can be access here at the link http://nciindia.aiims.edu/en/cancer-statistics

Real Scientific Analysis of the Problem:

Now we come to some real scientific terms. We need to first decompose CFR in order to be able to compare CFR between India and any other country as per the peer reviewed scientific article( Its accurate on data and interpretation unlike a dumb Journalist’s agenda driven article)  Decoding India’s Low Covid-19 Case Fatality Rate give by equation below [CFR- Case Fatality Rate]

Let’s look at the CFR of india based on various age groups. Notice how CFR is high for the age group of 60-69 years than rest of the groups. While its so low for groups below the age of 40 years.

Finally comparing CFR between India and others. Look at the difference values “Diff”. Where, countries such as-South Korea, South Africa, Chile, Columbia, Argentina, Turkey & California have lower CFR than India.

So, let’s look at populations of these countries with negative CFR difference w.r.t India. Meaning lower mortality rates. Exactly, 4741466 people fall under 60-69 age group for the state of California.

Notice how the death rate is so high compared to infections. See how the graph almost a symmetrical invert of CFR. Now compare this with the data in table 3. Take a note of the facts that across all age groups, the CFR is identical to India.

Now let’s look at South Korean Demographics. The population of South Korea is about 20 million. Therefore, even in comparison it shall have lower CFR than India. Everyone was going gaga over the Korean rate of testing and contact tracing forgot that this kind of model cannot be replicated elsewhere. Because, Korean society follows the government orders quite sincerely. They are a disciplined, educated homogenous society. They are very clear about their national priorities; they don’t disrupt a government order just because they dislike or like a certain politician. Trust me on this, I have spent about a decade of my life in Korea and I really respect them.  Despite of all that the CFR figures and trends for Korea is similar to India & California across age groups.

So, what do we learn from all of this? Well, logically fire that burns a bread in South Africa shall burn the same bread in India, Korea and California. Water that wets a fish in Korea shall wet a fish in India (unless it is a feminazi fish, yeah whatever). But, in Russia and other Slavic states the water is alcoholic when one squats in an ADIDAS track suit.

The virus is not behaving mysteriously. It follows the gold standard Shapley procedure of the statistics and Game theory. Its following same trend everywhere across the globe. The mystery is how one interprets the same data, remember the scientists are not writing news articles, it is the journalists and that’s where the trouble is. These are not my words, these are the words of the renowned Astrophysicist Neil deGrasse. He has clearly said on a TV interview that the Science journalism has a problem. Here is the youtube link to that interview Neil deGrasse Tyson: Science journalism has a problem | Big Think

Dear Amy Kazim I don’t think I need to add any further where the mystery is! The people who advised PM Narendra Modi the lockdown were scientists and medical advisory council.

The CFR= Case Fatality Rate across all nations is similar showing similar behaviour across the age groups. Therefore, there is no mystery here. So That begs for an important question, about the Indian scenario of Virus.

How come less number of deaths in India?

Purely from the age group and CFR POV we know that CFR is low for populations falling in the age group less than 40 years of age. So, the population which remained under lockdown in India has been the working age population, which is the highest among all nations in both ratio and absolute numbers. Thus they have a better rate of survival and lesser rate of infections too. Which is consistent with the trends we saw from rest of the places.

Most of the deaths in the Indian population happened in HRWC, but most of that population along with LRWC was locked inside the homes during the multi-phase extended lockdowns. The children (category 0-19 years of age) have not returned to school yet and hence maximum of them have been kept away from exposure which accounts for 42% of the population.

Based on this, Its safe to say that 70% of the Indian population was kept inside homes most of the time, which delayed the virus spread. The interesting thing about viruses is that they undergo several 1000 generations within a few days. This mutates them to a state which is symbiotic with the other living organisms around them. This is the basic and core principle of evolutions. I used evolutionary algorithms during my research for optimization of W/L ratios in FETs, so I know what mutation actually means. This was a similar situation with influenza viruses some tens of thousands of years ago when the first outbreak virus happened it almost wiped out the homo-sapiens. However, by sequence of random events it mutated to be symbiotic with the Human body. History of Influenza Pandemics

Even now a vast majority of the High-Risk working population has not returned to offices as they continue to work from home.

In conclusion, the Lock down and due diligence of the Indian govt prevented the catastrophe which was waiting to explode.

In ancient Indian culture has taught Indians to worship their parents as Gods and despite the attempt by Liberal/Leftist media over the past few decades to destroy the unique culture in India, majority of population in India still love and respect their parents and most of the senior citizens live with their children unlike in the West where senior citizens are sent to the Old Age Homes. Isn’t this love, respect and care of the senior citizens, an aspect of unique Indian culture prevented the Catastrophe that could have been unleashed by the Chinese Virus had India not retained its ancient culture?

Did the Critics also forget that India was the only country that was mass producing and distributing Hydroxychloroquine besides other medicines to the world during the initial days of the Pandemic?

At last do not forget, India has already started distributing Vaccines to the other countries selflessly.