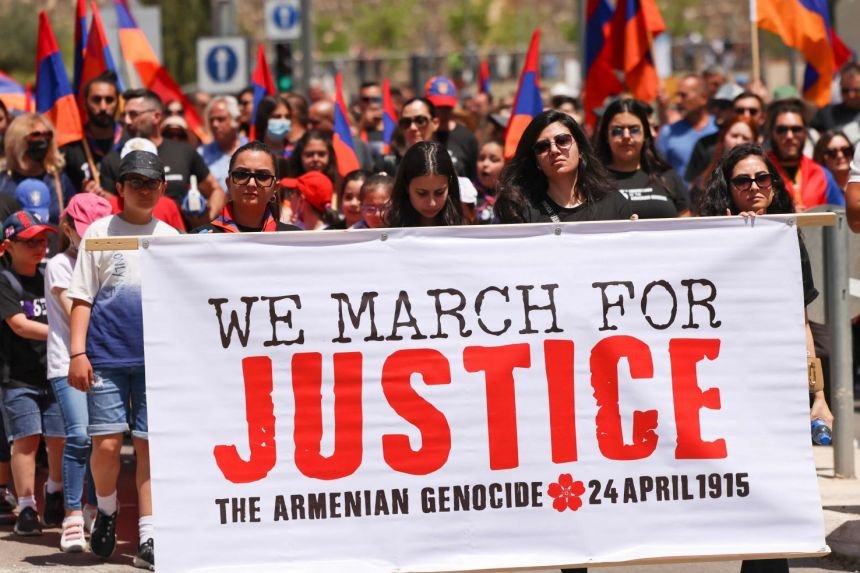 America’s Formal Recognition of Armenian Genocide has added to Erdogan’s new problem with the Biden Administration. President Joe Biden on Saturday became the first US president to officially recognize the massacre of Armenians under the Ottoman Empire as a genocide, risking a potential fracture with Turkey.

Each year on this day, we remember the lives of all those who died in the Ottoman-era Armenian genocide and recommit ourselves to preventing such an atrocity from ever again occurring. Beginning on April 24, 1915, with the arrest of Armenian intellectuals and community leaders in Constantinople by Ottoman authorities, one and a half million Armenians were deported, massacred, or marched to their deaths in a campaign of extermination. We honor the victims of the Meds Yeghern so that the horrors of what happened are never lost to history. And we remember so that we remain ever-vigilant against the corrosive influence of hate in all its forms.

Of those who survived, most were forced to find new homes and new lives around the world, including in the United States. With strength and resilience, the Armenian people survived and rebuilt their community. Over the decades Armenian immigrants have enriched the United States in countless ways, but they have never forgotten the tragic history that brought so many of their ancestors to our shores. We honor their story. We see that pain. We affirm the history. We do this not to cast blame but to ensure that what happened is never repeated.

Today, as we mourn what was lost, let us also turn our eyes to the future—toward the world that we wish to build for our children. A world unstained by the daily evils of bigotry and intolerance, where human rights are respected, and where all people are able to pursue their lives in dignity and security. Let us renew our shared resolve to prevent future atrocities from occurring anywhere in the world. And let us pursue healing and reconciliation for all the people of the world.

The American people honor all those Armenians who perished in the genocide that began 106 years ago today.

The move fulfills Biden’s campaign pledge to finally use the word genocide to describe the systematic killing and deportation of Armenians in what is now Turkey more than a century ago. Biden’s predecessors in the White House had stopped short of using the word, wary of damaging ties with a key regional ally.

Turkish Foreign Minister Mevlut Cavusoglu on Saturday said Ankara completely rejects Biden’s use of the term. He tweeted, “Words cannot change or rewrite history. We cannot learn from anyone about our history. Political opportunism is the greatest betrayal of peace and justice. We totally reject this explanation, whose sole basis is populism.”

Turkish Presidency communications director Fahrettin Altun later Saturday said that “the Biden administration’s decision to misportray history out with an eye on domestic political calculations is a true misfortune for Turkey-U.S. relations.”

Turkish President Erdogan reminded Biden of the Genocide of the Indians by the early migrants to the US and and also mocked about the genocide of people in Vietnam and Iraq by US forces. He said, “Biden’s statement damaged Turkish-American relations. If you say genocide, look at yourself. It doesn’t worth to talk about Indians-everything is already obvious .So you cannot label Turkey as “genocide”. Regarding the United States, discussions can be open on many occasions: from Vietnam to Iraq. If you are talking about genocide, then look in the mirror and assess yourself. “

Turkey later summoned David M. Satterfield, the US ambassador to the country, following the announcement, according to Turkish state media Anadolu.

“Turkey’s strong reaction was conveyed to David Satterfield, who was accepted by Deputy Foreign Minister Sedat Onal, according to diplomatic sources,” Anadolu reported. “Satterfield was told that Turkey finds the statement unacceptable, totally rejects and strongly condemns it.”

Photographs from the era document some mass killings. Some show Ottoman soldiers posing with severed heads, others with them standing amid skulls in the dirt. The victims are reported to have died in mass burnings and by drowning, torture, gas, poison, disease and starvation. Children were reported to have been loaded into boats, taken out to sea and thrown overboard. Rape, too, was frequently reported.

The Kremlin considers Washington’s recognition of the Armenian Genocide in the Ottoman Empire as an internal affair of the United States.

Earlier The United States had officially kicked Turkey out of its F-35 fighter jet training program on Wednesday 21-April 2021. Now America’s Formal Recognition of Armenian Genocide has added to Erdogan’s new problem with the Biden Administration.

For centuries, many different ethnic groups lived together in the Ottoman (Turkish) Empire. The Armenians, a Christian minority, were one of these groups. Like other minorities, they had religious freedom but were considered inferior to the Islamic Turkish majority.

In the 19th century, the Armenian community became more educated, wealthier and more urban. This change challenged the social hierarchy and resulted in state-sponsored violence against the Armenians.

At the turn of the 20th century, a number of Turkish youth groups (known as the Young Turks) began calling for change in the Empire. They opposed the Sultan’s control over the state and demanded a more democratic society. In 1908, the Young Turk Revolution achieved this reform, establishing a constitutional monarchy.

In 1913, an extremist branch of the Young Turks, the Committee of Union and Progress (the CUP) seized control of the government. They introduced a policy of Turkification, encouraging non-Turkish citizens to convert to Islam and become more Turkish. Christian Armenians were particularly targeted by this policy. Some converted but many refused, and instead worked to preserve their cultural identity through education.

In January 1915, Forced Turkification began. To limit resistance, the CUP targeted the Armenian population in phases, removing those most likely to resist. First, young Armenian men in the army were assigned to hard labour in remote areas and executed. Then, on the night of April 24, intellectuals and community leaders were arrested and deported to the countryside, where they were later executed. On 24 April 1915, at the orders of Talat Pasha, an estimated 1.5 million Armenian people were sent on death marches leading to the Syrian Desert in 1915 and 1916. In commemoration, Armenian communities around the world today observe April 24 as Red Sunday.

In May, the remaining Armenian population was deported. They were transported by train and foot to concentration camps in the Syrian desert under the supervision of the Teshikilati Mahsusa – the Special Organization, a unit of the Turkish army made up of criminals released from prison for the purpose of handling the Armenian deportees. The members of this unit were notorious for their brutality. It is estimated that one million Armenians were killed in, and on their way to, the camps – approximately half of the pre-war population.

Driven forward by paramilitary escorts, the deportees were deprived of food and water and subjected to robbery, rape, and massacre. In the Syrian Desert, they were dispersed into a series of concentration camps; in early 1916 another wave of massacres were ordered, leaving about 200,000 deportees alive by the end of 1916. Around 100,000 to 200,000 Armenian women and children were forcibly converted to Islam and integrated into Muslim households. Massacres and ethnic cleansing of Armenian survivors were carried out by the Turkish nationalist movement during the Turkish war of independence after World War I.

Reports of the genocide soon reached Western nations but these governments ignored calls for action. World War I was being fought on many fronts and other battles were of more immediate concern. The British and American governments did, however, issue official condemnations against the CUP regime, and American humanitarian organizations raised funds in support of the “starving Armenians.”

In 1939, shortly before the German invasion of Poland, Hitler delivered a speech to the commanders of the German military, referencing the Armenian Genocide. Assuring them that history would forgive their use of brutal force against the Poles, he asked, “who today still talks about the annihilation of the Armenians?”