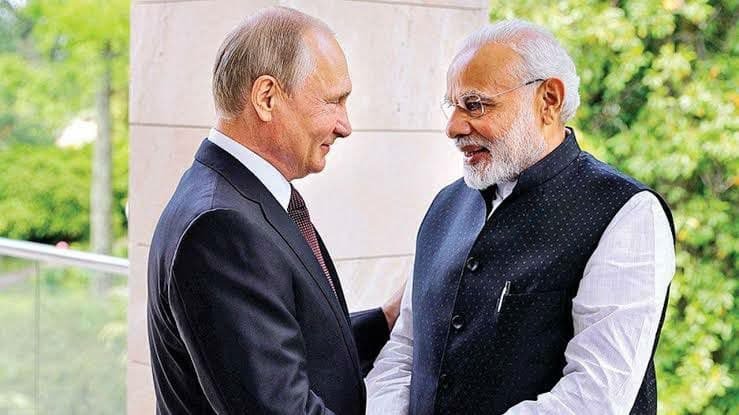 Russia as always is a reliable partner for India. India is to Become Production Hub For Russian Sputnik-V Vaccines against Chinese Corona Virus for use in India, Russia and third countries. Besides that both the countries explored the possibility of “additional” production of Russian military equipment in India within the concept ‘Make in India’.

Indian Prime Minister Narendra Modi on Wednesday spoke on telephone with Russian President Vladimir Putin and thanked him for extending support in India’s fight against the massive second wave of Chinese Corona Virus in India.

Had an excellent conversation with my friend President Putin today. We discussed the evolving COVID-19 situation, and I thanked President Putin for Russia’s help and support in India’s fight against the pandemic.
@KremlinRussia_E

We also reviewed our diverse bilateral cooperation, especially in the area of space exploration and renewable energy sector, including in hydrogen economy. Our cooperation on Sputnik-V vaccine will assist humanity in battling the pandemic.

To add further momentum to our strong strategic partnership, President Putin and I have agreed to establish a 2+2 Ministerial Dialogue between our Foreign and Defence Ministers.

The two leaders discussed the evolving Covid-19 pandemic situation. Russian President Putin expressed solidarity with the people and government of India and conveyed that Russia would extend all possible support in this regard. Prime Minister Modi thanked President Putin and noted that “the prompt Russian support to India was a symbol of our enduring partnership”, a statement issued by the Indian Prime Minister’s Office said.

The two leaders noted the ongoing cooperation between the two countries to fight the global pandemic. Approval for emergency use of Sputnik-V vaccine in India was appreciated by President Putin. The leaders noted that the Russian vaccine will be manufactured in India for use in India, Russia and third countries, it added.

Most important point to note in the above tweets is that, Indian Prime Minister tweeted from his official twitter handle and referred to Russian President Vladimir Putin as “my friend”. Modi has used the words “my friend” in his tweet in the past only for former US President Donald Trump during Namaste Trump rally with 125,000-strong crowd who had gathered to welcome to US president Donald Trump on his first visit to India.

PM Modi also conveyed appreciation for the support received from Russia for India’s Gaganyaan Program and the completion of the Russian phase of training of the four Gaganyaan astronauts.

The leaders decided to establish a new 2+2 dialogue at Minister level comprising Foreign and Defence Ministers from both countries.

President Putin assured PM Modi of Russia’s full support for the success of India’s Presidency of BRICS during 2021. They also agreed to remain in close touch on bilateral and international issues.

Sputnik V, made by Moscow’s Gamaleya National Research Institute of Epidemiology and Microbiology, has become the third vaccine after Serum institute of India’s Covishield and Bharat Biotech’s Covaxin to get approval from Drugs Controller General of India (DCGI).

India and Russia have decided to jointly manufacture Sputnik-V vaccines. Sputnik-V was added to India’s arsenal of vaccines on April 12 when an expert panel approved Sputnik-V, the vaccine against Covid-19 developed by Russia.

The Russian Direct Investment Fund (RDIF), the country’s sovereign wealth fund, had in September 2020 tied up with Indian pharmaceutical company Dr Reddy’s Laboratories for clinical trials and production. Since then, several Indian drugmakers like Hetero and Panacea Biotech have made pacts with Dr Reddy’s and RDIF to produce the Sputnik V vaccine locally. Together, these companies can produce up to 850 million doses of vaccine annually.

Sputnik V uses a viral-vector platform – which uses a harmless virus to introduce genetic material from the virus that causes COVID to your immune system – like the Oxford/AstraZeneca and Johnson & Johnson vaccines do. It was developed by the Gamaleya National Research Institute of Epidemiology and Microbiology, which has also been involved in developing vaccines for Ebola and Mers.

The Sputnik V is a two-dose vaccine, where each dose is administered three weeks apart.

The EU often struggles to find a unified voice on Russia, with attitudes towards the country and historic relationships with it being very diverse across Europe. On the matter of Sputnik V, there are increasing calls for a cautious pragmatism. But this is a highly political matter.

EU member states are allowed to strike separate deals with vaccine makers which have not signed agreements with the EU. Austria, Hungary and Slovakia have ordered Sputnik V but only Hungary has deployed it to date.

The Czech Republic, Germany and Austria are trying to secure supplies of the vaccine, but have insisted it will only be used after the European Medicines Agency gives the go-ahead. As with other vaccines, any deliveries are unlikely to be immediate.

Speaking to media on the issue Kiril Dmitriev, CEO, Russian Direct Investment Fund said that registration of Sputnik V in India is a milestone for the Russian vaccine. “Sputnik V is the world’s second most recognized coronavirus vaccine in terms of the number of approvals issued by government regulators. Following approval in India, it will be approved for use in 60 countries with a total population of over 3 billion people. India is the most populous country to approve Sputnik V. Many of India’s neighbors, including Sri Lanka, Myanmar and Pakistan, are among countries that had already registered the Russian vaccine,” he said. “India is RDIF’s crucially important production partner. We truly value its unparalleled manufacturing capabilities and scientific expertise; the country is by far the biggest producer of Sputnik V globally, which makes a lot of sense as India is a medical powerhouse producing about 60 percent of all vaccines in the world today,” he said

RDIF has announced production contracts with five leading Indian manufacturers for more than 425 million people-doses of Sputnik V in a year (accounting for more than half of Sputnik V’s global production this year). Phase 2 and phase 3 clinical trial of Sputnik V are held in India. Some Indian production companies have passed quality checks and are already producing Sputnik V right now, ramp up will take a couple of months. “India will be a key hub for production of vaccines in India and for other countries. More than 50 million doses per month will be manufacture in India in the summer,” Dmitriev said and informed that RDIF has recently announced agreement with Panacea Biotec, Virchow Biotech, Stelis Biopharma, Hyderabad-based Gland Pharma and Hetero to produce multimillion doses of Sputnik V. According to a YouGov poll, Sputnik V is among top 3 most preferred vaccines in the country alongside Pfizer and AstraZeneca.

Six manufacturing units have been selected for producing Sputnik V in India.

“Two out of six units are expected to begin supply by June-July, the other two by August and the final two are slated to start delivering the made-in-India vaccine in September or October,” Deepak Sapra said.

The company representative said that they expect to deliver enough doses to vaccinate 12 to 13 crore people in India within 2021. He, however, did not divulge the number of vaccine doses that will be imported from Russia in May.

As per government guidelines for procurement of Covid-19 vaccines, the first batch – imported from Russia- will be available in private markets and the subsequent batches – produced in India – will be divided between the Centre, and state governments and private players, Deepak Sapra said.

When asked about the expected price of the Sputnik V dose, Deepak Sapra said that it was yet to be finalised.

“We are in the process of determining the price with a goal that it should aid in maximising access to Sputnik V. There will be a cost difference between the vaccine doses that will be imported from Russia and those manufactured domestically,” he said.

Considering all the available options is a sensible approach given the hiccups in vaccine risks, supply and approval delays that we’ve seen to date. Strategically considering a wide range of vaccine candidates is to be commended. Due diligence has to be done in all such considerations.

India made the cheapest vaccines and supplied millions of vaccines to over 128 countries around the world free of cost. India’s action was inspired by humanity. However Earlier US had blocked supplies for raw materials for vaccine manufacturing in India.

Related Article Biden And Europe Blocking Vaccine Raw Material Supplies To India – A Plan To Create A Market For Pfizer And China?

Related Article Absolute Silence When Biden Blocked Raw Material Supplies For Vaccines But Ululation When He Released : The Case of Brown Sepoys

There is concern among the public about the unreliability of US as a supplier. That’s why public opinion favors multiple vendors from different countries and emphasis is on “Make in India”.

Defence Cooperation between India and Russia

Earlier India and Russia on Tuesday decided to enhance defence cooperation not only in procurement, but also explored the possibility of “additional” production of Russian military equipment in India.

Addressing a joint press event after the talks, External Affairs Minister Jaishankar said “We are both cognisant of multipolar and rebalanced nature of international relations today.”

He further said, “Much of our discussions today cover the preparations for President Putin’s visit for the annual summit later this year. Our bilateral cooperation remains energetic and forward-looking. We talked about longstanding partnership in nuclear, space and defence sectors.”

Both the countries have a mechanism under which India’s prime minister and the Russian president hold a summit meeting annually to review the entire gamut of ties. So far, 20 annual summit meetings have been held alternately in India and Russia.

“We discussed prospective and additional manufacturing of Russian military equipment in India within the concept ‘Make in India’. So here, I didn’t see any changes from our Indian partners and friends,” Lavrov said during the press interaction after talks with Jaishankar.

“Today we exchanged views on these. Our Indian friends have the same position. We are interested in inclusive cooperation, which is for something and not against somebody,” he said.