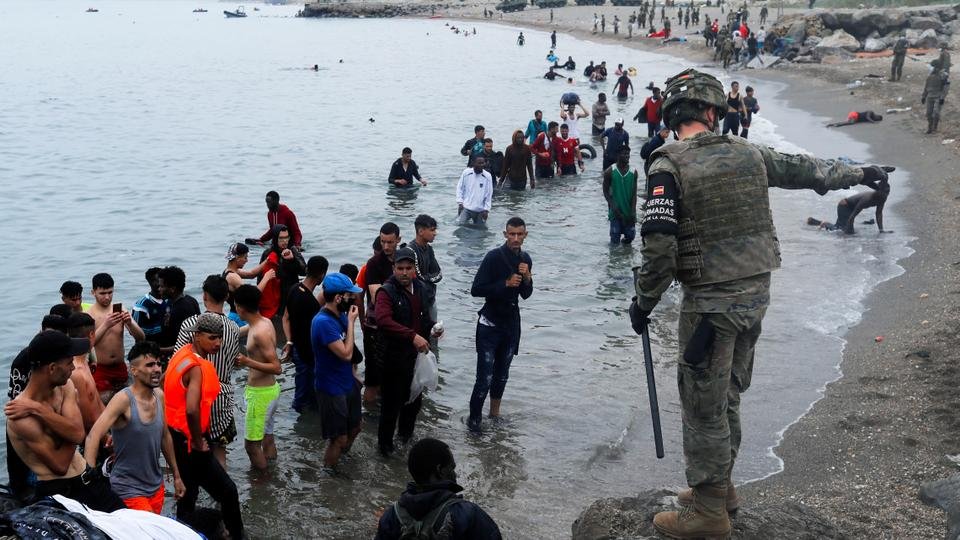 Spain has deployed troops, military trucks and helicopters in its North African enclave of Ceuta on Tuesday after more than 8,000 migrants crossed over from Islamic Nation Morocco and arrived on the beaches of Ceuta, one of the largest movements of migrants reported in the area in recent years. Spain had already sent back a few of the illegal migrants.

They say the migrants either swam around the border fences that jut out into the sea or walked across at low tide or arrived aboard inflatable boats.

It should be noted that Morocco has 98.7% Muslim population and none of the migrants who entered into North African enclave of Ceuta on Monday and Tuesday are non-Muslims. In all the images we saw on the social media, there were no females or old among them. All we could see were young Muslim male men of fighting age.

Spain’s Prime Minister, Pedro Sánchez has vowed to restore order. Spain says around half of the migrants have been sent back to Morocco.

By Tuesday evening, footage of the beach showed that nearly all migrants had been cleared.

Mr. Sánchez travelled to Ceuta and Melilla to deal with the crisis, which exacerbated diplomatic tensions with Morocco.

Morocco withdrew its ambassador for consultations after Spain’s foreign minister told the envoy of her “disgust” at what had happened.

Most of the migrants are said to be from Morocco. The Spanish troops have been deployed to the beach to help border police at Ceuta’s main entry point – Tarajal, on the enclave’s south side.

“It’s such a strong invasion that we are not able to calculate the number of people that have entered,” said Juan Jesus Vivas, the president of Ceuta, an autonomous city of about 20 square kilometres.

“The army is in the border in a deterrent role, but there are great quantities of people on the Moroccan side waiting to enter,” he told Cadena SER radio.

By evening reports said the number of people trying to enter by sea had decreased. Some migrants were voluntarily returning to Morocco while others could be seen being carried away by soldiers.

The European Union’s top migration official – Home Affairs Commissioner Ylva Johansson – described the number of arrivals in Ceuta as “unprecedented” and “worrying” and she called on Morocco to prevent people from setting out in the first place.

“The most important thing now is that Morocco continues to commit to prevent irregular departures, and that those who do not have the right to stay are orderly and effectively returned,” Johansson told members of the European Parliament.

“Spanish borders are European borders. The European Union wants to build a relationship with Morocco based on trust and shared commitments. Migration is a key element in this,” she said.

In a video shared by a Spanish police union urging authorities to provide more reinforcements, anti-riot officers behind the border fence were using shields to protect themselves from stones being thrown by people in Morocco.

Interior Minister Fernando Grande-Marlaska said authorities had processed the return of 2,700 migrants by midday Tuesday and that the rest would follow soon because Morocco and Spain signed an agreement three decades ago to return all those who swim into the territory.

At the other enclave, Melilla, 86 sub-Saharan Africans entered on Tuesday via its southern jetty.

Spanish media said it was different in Ceuta, where Moroccan border guards stood by and watched as migrants took to the sea to try to reach the enclave.

Most of the migrants were said to be young men, but there were also several families. Many had used inflatable rings and rubber dinghies.

They started arriving in Ceuta in the early hours of Monday. At least one died during the crossing.

Last month, more than 100 migrants arrived at Ceuta’s Tarajal entry point. Most were sent back, except about 30 minors whose ages were confirmed by medical tests.

Since the 17th Century Ceuta and Melilla have been under Spanish rule, though they are long claimed by Morocco. They have semi-autonomous status, like some regions of mainland Spain.

Morocco’s loosened border watch came after Spain decided to give a visa for medical treatment to the chief of a militant group that fights for the independence of Western Sahara. Morocco annexed the sprawling region on the west coast of Africa in 1975.

In April, Spain allowed Sahrawi leader Brahim Ghali, 73, to be treated in hospital for Covid-19, reportedly in Logroño. He leads the Polisario Front, fighting for Western Saharan sovereignty against the claims of Morocco. The Moroccan government responded angrily and warned Spain that harbouring Mr Ghali would bring “consequences”.

Morocco’s Foreign Ministry has said Madrid’s move to assist Brahim Ghali, head of the Polisario Front that has fought Morocco, was “inconsistent with the spirit of partnership and good neighbourliness” and vowed there would be “consequences.” With “Consequences” the ministry clearly meant sending young Muslim Males to Spain’s territory with some minors who will have to be taken back to Spain under Spanish Law and ultimately the radicals will land up on the Spain’s streets and can bring more trouble to already troubled Europe that has not yet recovered from the migration of Millions of young Muslim Males from several Islamic nations.

Spanish Foreign Minister Arancha González said she was not aware of Morocco using the border issue to exert political pressure. But many see Monday’s events, when Moroccan border guards appeared not to stop migrants from crossing, as evidence of a reprisal.

Such difficulties are likely to complicate the two neighbours’ normally tight co-operation on the migrant issue. However, Spain says it has already repatriated about half of the migrants, following talks with Morocco.

The vast majority of those who reached Ceuta were Moroccan. Local police have clamped down on sub-Saharan migrants in northern Morocco in recent years, meaning they have sought other routes to Spain, such as across the Atlantic to the Canary Islands.