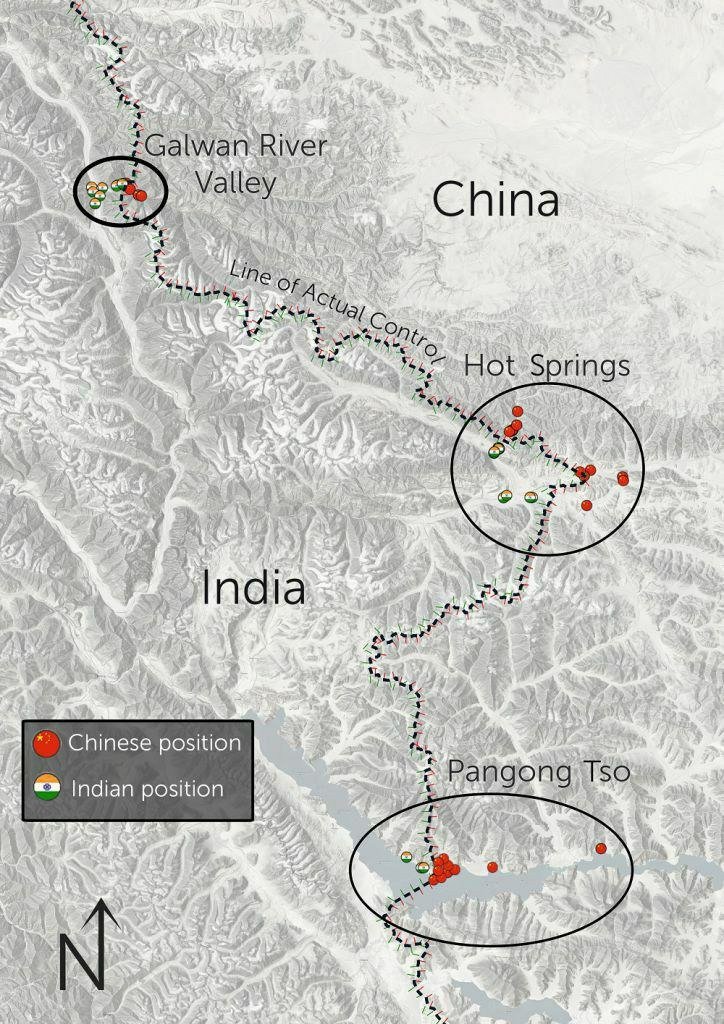 In total, there were 5 Border agreements between India and China to settle the border issues. First two are clean enough, trouble starts with the 2005 agreement.

The 5 agreements signed by India

2. 1996 Agreement on Confidence Building Measures in the Military Field along the LAC signd by PM Shri HD Deve Gowda.

Full Text of all the above agreements can be referenced in our previous article India China Border Agreements: Full Text

2. The end of Cold War and a reset in global power equations.

On top of this, there is this 2008 MoU between Congress and CCP.

Anyways. A brief reading of these five agreements:

Quoting Panchasheel, the treaty states the below points

2. “Neither side shall use or threaten to use force against the other by any means.” The troop levels will be brought to a minimum levels based upon mutual agreements. Air intrusions are not permitted. “Both sides shall also consult on possible restrictions on air exercises in areas to be mutually agreed near the line of actual control.”

3. LAC will be respected pending an ultimate solution to the boundary question and “no activities of either side shall overstep the line of actual control.”

5. No military exercises will be undertaken in mutually identified zones and prior information will be given over any military exercise near the border, that too within the prescribed limits.

6. “The two sides agree that references to the line of actual control in this Agreement do not prejudice their respective positions on the boundary question.”

Again, this quotes Panchasheel. This is a follow up of the 1993 agreement. It talks the same language as that of the previous agreement but specifies the limits over what sort of weaponry to be reduced, size of military exercises (less than 15000 troops) etc

1. “neither side shall use or threaten to use force against the other by any means or seek unilateral military superiority”

2. “The two sides reiterate their determination to seek a fair, reasonable and mutually acceptable settlement of the boundary question. Pending an ultimate solution to the boundary question, the two sides reaffirm their commitment to strictly respect and observe the line -of actual control in the India-China border areas. No activities of either side shall overstep the line of actual control.”

3. “combat aircraft (to include fighter, bomber, reconnaissance, military trainer, armed helicopter and other armed aircraft) shall not fly within ten kilometres of the line of actual control.” “If either side is required to undertake flights of combat aircraft within ten kilometres from the line of actual control, it shall give the following information in advance to the other side, through diplomatic channels”

4. “With a view to preventing dangerous military activities along the line of actual control in the India-China border areas, the two sides agree as follows:

“Neither side shall open fire, cause bio-degradation, use hazardous chemicals, conduct blast operations or hunt with guns or explosives within two kilometres from the line of actual control. This prohibition shall not apply to routine firing activities in small arms firing ranges.”

“If the border personnel of the two sides come in a face -to-face situation due to differences on the alignment of the line of actual control or any other reason, they shall exercise self-restraint and take all necessary steps to avoid an escalation of the situation. Both sides shall also enter into immediate consultations through diplomatic and/or other available channels to review the situation and prevent any escalation of tension.”

5. “Should the personnel of one side cross the line of actual control and enter the other side because of unavoidable circumstances like natural disasters, the other side shall extend all possible assistance to them and inform their side, as soon as possible regarding the forced or inadvertent entry across the line of actual control. The modalities of return of the concerned personnel to their own side shall be settled through mutual consultations.”

“The two sides shall provide each other, at the earliest possible, with information pertaining to natural disasters and epidemic diseases in contiguous border areas which might affect the other side. The exchange of information shall take place either through diplomatic channels or at border personnel meetings.”

6. “In case a doubtful situation develops in the border region, or in case one of the sides has some questions or doubts regarding the manner in which the other side is observing this Agreement, either side has the right to seek a clarification from the other side. The clarifications sought and replies to them shall be conveyed through diplomatic channels.”

This is a general agreement between both the countries and mentions the border issue as a passing glance. More focus is on Tibet and One-China Policy than on the border issues.

Friendship and cooperation between the two countries meets the need to:

The two sides exchanged views on the India-China boundary question and expounded their respective positions. They reiterated their readiness to seek a fair, reasonable and mutually acceptable solution through consultations on an equal footing. The two sides agreed that pending an ultimate solution, they should work together to maintain peace and tranquility in the border areas, and reiterated their commitment to continue implementation of the agreements signed for this purpose, including the clarification of the Line of Actual Control.

The two sides agreed to each appoint a Special Representative to explore from the political perspective of the overall bilateral relationship the framework of a boundary settlement.

The Indian side recognizes that the Tibet Autonomous Region is part of the territory of the People’s Republic of China and reiterates that it does not allow Tibetans to engage in anti-China political activities in India. The Chinese side expresses its appreciation for the Indian position and reiterates that it is firmly opposed to any attempt and action aimed at splitting China and bringing about “independence of Tibet”.

The Indian side recalled that India was among the first countries to recognize that there is one China and its one China policy remains unaltered. The Chinese side expressed its appreciation of the Indian position.

The two sides stated that the improvement and development of India-China relations is not targeted at any third country and does not affect either country’s existing friendly relations and cooperation with other countries.

Trouble starts from here. On one side it says, boundary issues shouldn’t impact bilateral ties, on the other hand, the second point gives every right for either countries to alter the boundaries. Woe to those who signed this for not using it to our advantage.

Quotes Panchasheel and declares it’s a followup of 1993 and 1996 agreements and the 2003 “Declaration on Principles for Relations and Comprehensive Cooperation between India and China, signed on 23 June 2003”.

1. “The differences on the boundary question should not be allowed to affect the overall development of bilateral relations. The two sides will resolve the boundary question through peaceful and friendly consultations. Neither side shall use or threaten to use force against the other by any means.”

2. First sign of trouble. “Both sides should, in the spirit of mutual respect and mutual understanding, make meaningful and mutually acceptable adjustments to their respective positions on the boundary question, so as to arrive at a package settlement to the boundary question. The boundary settlement must be final, covering all sectors of the India-China boundary.” “The boundary should be along well-defined and easily identifiable natural geographical features to be mutually agreed upon between the two sides.”

This refers to all previous agreements but not to the 2003 Pact and talks about what the Joint Working Mechanism will do. Realistically, there is nothing of note in this.

Same as above – quotes all previous agreements except the 2003 one. Talks more about border defence cooperation. Another fiasco. The problem with this is, you are assuming China will follow the rules. What if it doesn’t? Did it ever?

1. No Force shall be used to attack or threaten or seek unilateral superiority.

2. Sharing of information over military exercises, demolition operations, unmarked mines, jointly combat smuggling of arms and other contraband, help each other in locating those who have crossed/are crossing the border and help each other in combating natural disasters and epidemics, and “Any other way mutually agreed upon by the two sides.”

3. Periodic Flag Meetings and other modes of communication

Now, look at this. Are we seriously saying soldiers are sent to impossible places like Ladakh or Arunachal for teaching the Chinese, the Indian Kabaddi and how to make Indian sweet Rasamalai? Such things happen. But, they need not be put on paper.

4. Second Problem: Cultural Engagement: “In order to enhance understanding and cooperation between the border defence forces of the two sides, each side may invite the other side for joint celebrations on major national or military days or festivals and organize cultural activities, non-contact sports events and small scale tactical exercises along the line of actual control in the India-China border areas. In addition, the two sides may also conduct joint military training exercises, at Army level, in each other’s country on a regular basis.”

Naïveté again. You need two to tango. When Chinese didn’t follow these, why are Indians even following?

5. Third Problem: “The two sides agree that they shall not follow or tail patrols of the other side in areas where there is no common understanding of the line of actual control in the India-China border areas.”

6. “The two sides agree that if the border defence forces of the two sides come to a face-to-face situation in areas where there is no common understanding of the line of actual control, both sides shall exercise maximum self-restraint, refrain from any provocative actions, not use force or threaten to use force against the other side, treat each other with courtesy and prevent exchange of fire or armed conflict.”

On top of this, there is this prickly Congress-CCP MoU signed in 2008 which no one knows about.

“The memorandum of understanding (MoU) also provides the two parties the opportunity to consult each other on important bilateral, regional and international developments.”

This quote over it, We are not exactly sure if there is a clash of interests or if there is any influence of Congress Party behavior w.r.t. Chinese border situation(2012 Demchok, for example) or the two agreements.

The point is, these agreements are as useful to India as they are to China. If you decide to be Mr. Good Boys, Chinese will take your land, if you behave like the street bullies, Indians will be ruling Rutok and Tsaparang. It’s all about political will and the intentions.

Its about making the right choices. Will India give up under Chinese Bullies? Or will India stand up and become a role model (by claiming Aksai Hind) for other countries in South Asia especially in South China Sea countries to stand up against Chinese bullies.

We heard the stories in the past when Chinese soldiers painted stones deep inside Indian territories and put on some markings in Chinese language. Will India do the same?

Will the border flare up derail the International effort to sue China of Bio-Terrorism and claim huge compensation for the 461K deaths of Innocent Civilians worldwide because of Chinese Virus? Will the Belligerent paper dragon’s wings be clipped by the international community by forfeiting all Chinese loans, nationalizing all Chinese Assets and suing China for Compensation?