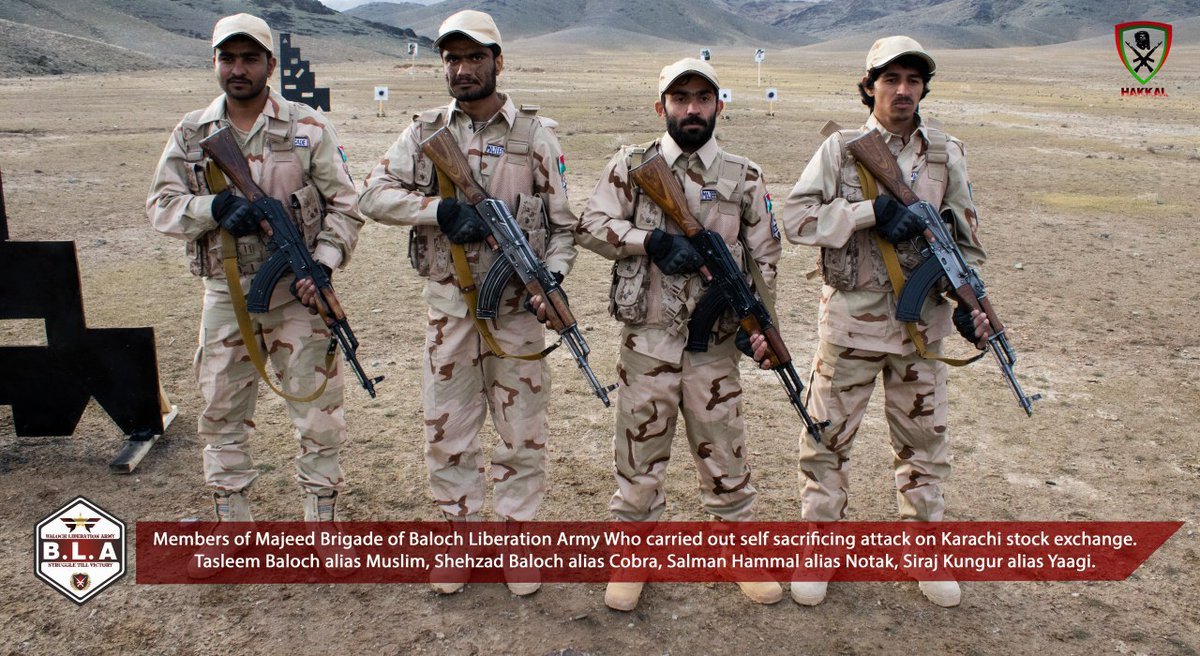 Four Baloch Freedom Fighters Martyr in a self sacrificing attack in an attempt to seize Karachi Stock Exchange today 29-June 2020.

BLA allegedly released the picture of four freedom fighters who stormed the Karachi stock exchange with their bravery.

As per unverified sources, 6 Guards and 2 policemen have been killed in the Self Sacrificing attack by the brave Martyr Freedom Fighters.

Policemen and security officials are among those confirmed dead, according to Mohammad Azeem, an official with the Edhi rescue center, a prominent local charity service.

Rescue and paramilitary security personnel are at the scene, Azeem said.

A BLA source, confirming the claim, said: “Majeed Brigade of Baloch Liberation Army today has carried out a self-sacrificing attack on Karachi stock exchange. Our fighters are inside the building and have taken control of the area.”

Here is the statement from BLA regarding the attack on Pakistan Stock Exchange.

Abid Ali, director of the Pakistan Stock Exchange, said in a media briefing that four attackers entered the compound and started firing but were killed by security forces.

“There were four attackers who came from the parking lot, they threw a grenade at the main entrance of the KSE (stock exchange) and then started firing indiscriminately,” Ali said.

“The attackers were wearing uniform that looked like police uniforms, all four have been killed and the situation is currently under control.”

The Balochistan Liberation Army (BLA) group has claimed responsibility for the attack, according to Maj. Gen. Omar Ahmed Bukhari, the director general of the Pakistan Rangers Sindh, a paramilitary force under command of the country’s military.

“We are investigating further, to find out who these people are,” Bukhari said.

A tweet from the official Twitter page of the Pakistan Stock Exchange said, “The situation is still unfolding and management, with the help of security forces, is managing the security and controlling the situation,” it said.

“We will issue a more detailed statement in due course once the situation is under control and more details are known. For now firing has stopped and reinforcement are in place,” the tweet read.

The Balochistan Freedom Fighters are fighting for independence of Occupied Balochistan since several decades when Pakistan was Born and deceitfully occupied Balochistan. Baloch People are oppressed by the enforced disappearance and killing of Baloch people for organ harvesting. We covered about this in details in our previous article EXPOSED: Pakistan Army Doing Organ Harvesting after Enforced Disappearance of Ethnic Baloch, Pashtuns and Muhajirs.

Tough Message sent out to Pakistan and China

It should be noted that Pakistan is responsible for Genocide of Baloch People, looting and burning their villages, raping women, exploiting natural resources of Balochistan along with Chinese while Baloch People do not even get water to drink.

In our previous article Pakistan shifts Terrorist Training Camps to Balochistan. Balochistan Freedom Fighters kill 2 Lashkar-e-Taiba Terrorists in an encounter. Blow up a Gas Pipeline we had mentioned that Pakistan army is using these newly shifted Terrorists along with the members of Death Squads (Terrorists trained by Pakistan Army) to kill and loot Baloch civilians and burn their villages in order to suppress the Freedom Movement of the Baloch nation.

Pakistani army has formed a so-called death squad in Balochistan as well as all the criminals against the mobilization of the Baloch national independence. These criminal gangs obtain weapons and permits directly from the military, and as a compensation they have the freedom to commit any kind of crimes. According to a new plan of Pakistan Army and intelligence agencies, Lashkar-e-Taiba camps have been set up in mentioned areas of Balochistan. Funding and training are regularly received by the Pakistani Army. Religious extremists of such kind are not only a global threat but have also carried out numerous attacks on the Shi’ite community and Zikiris in Balochistan. Baloch fighters are the biggest obstacles to these global terrorist groups in Balochistan. Due to which, these religious extremists along with Pakistan Army and Death squads are active against Baloch fighters.

It should be noted that Pakistan is responsible for Genocide of Baloch People, looting and burning their villages, raping women, exploiting natural resources of Balochistan along with Chinese while Baloch People who are the owners of the lands are living miserable lives in poverty. All these Freedom fighters are from the families who have suffered at the hands of Pakistan Army and the death squads of Pakistan Army.

In the above article we had mentioned that the Freedom Fighters organization BRAS had reaffirmed, “the commitment that the blood of Baloch sons will be revenged with the independence of Balochistan. Our war will continue not only with the occupying forces for an independent state but also with all the terrorist elements who want to make Balochistan a base for terrorism for their vile intentions.”

As per sources, FATF Grey Listed Pakistan is under tremendous international pressure from International community to end the Terrorist Infrastructure and remove the Terrorist bases from Near the Indian Border. As a workaround, Pakistan has moved some of those bases to Balochistan.

As per the source, “We will now allow our land of Balochistan to be used by Terrorist Pakistan Army to be used as training ground to Dehshatgards (Terrorists) who kill non-Muslims on religious grounds. We are ready to cooperate with US and allies to eliminate UN Designated Terrorists from Balochistan.”

As per the source, “We request US and Afghanistan Government to provide us all the help to defeat the nefarious designs and end the terrorist producing factory of Pakistan Army in return of Freedom of Balochistan from the Occupying forces of Pakistan.”

Baloch Liberation Army (BLA) comprises of Baloch freedom fighters who are fighting for Balochistan’s independence. Their fight is against Pakistan Army. They fight against the Pakistan government & their installations.

With the Bravery shown by Baloch freedom Fighters who martyr in a day light attack, should Pakistan and China be not worried that they should desist from exploiting Balochistan and stop committing Genocide of native Baloch People?

Is it not the Law of Karma that Pakistan who had been killing Baloch people for Organ Harvesting, burning villages after villages, raping women in rape cells has to see the same people turning against the Occupying forces to wrest freedom now?