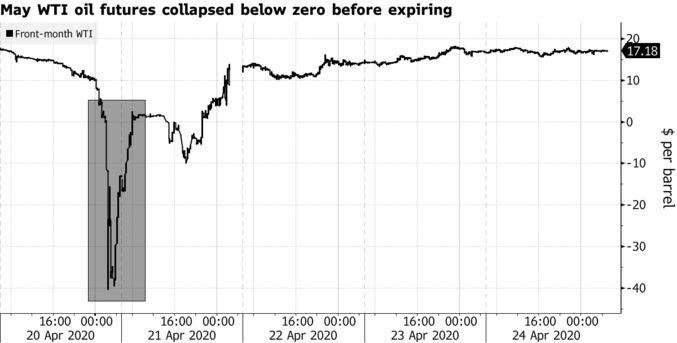 April 2020 will be remembered as the Biggest Crash in the History of Oil Trading, a crash engineered by China. It’s not just investors in the largest US oil ETF, the USO, who suffered billions in losses in that week starting 20th April 2020 after WTI plunged, its May contract settling at minus $37.63 on Monday, 20th April 2020: the shockwave from the crash in near-dated crude prices, which forced the USO to halt for trading on several occasions as it scrambles to rebalance daily and purchase as many longer-dated futures as it possibly can to avoid another deliverable disaster and stay in business, has also wiped out countless investors worldwide, many of whom ended up owing money to the bank.

The carnage to retail investors from the collapse in a product linked to U.S. crude oil futures surged many-fold the total estimates of the losses to all the investors world wide are not known.

The losses stem from the banks settling May West Texas Intermediate contracts on April 20 at minus $37.63 a barrel, leaving all retail customers caught in the middle of oil’s unprecedented collapse below zero, one which left clients owing money to the banks. Thousands of investor took to the Internet to protest the lender’s handling of the contract rollover and to demand it shoulder some of the losses.

Lakhs of investoers lost their margins of Billions of USD and owed the banks further billions. Investors still had to settle their positions at the Monday, 20th April 2020 WTI settlement price, and the bank completed settlement of all May contracts. Over the next few days, more investors settled their losses with some strategically disappearing and hoping they can leave the banks to foot the bills. Ivestor took loss as high has 235% on investments. The oil price slump left the investor owing Dollars to the banks.

“It was mind-bending,” said Keith Kelly, a managing director at the energy group of Compagnie Financiere Tradition SA, a leading broker. “Are you seeing what you think you’re seeing? Are your eyes playing tricks on you?”

Naturally investors – none of whom ever expected that oil prices could turn negative and end up owing the bank money for being long a security – were livid, But as per multiple bank traders the settlement date was set well in advance, so it wasn’t as if the bank had suddenly changed it. A bank trader said this was a situation where the “trading mechanism encountered an extreme situation in the extreme.”

As per several traders and market participants, some investors in the paper crude trading products were caught up in the price plunge because they tried to “buy on the dip” when crude prices dropped to $20 a barrel… without considering that prices could sink further into negative territory. As a result buyers ended up owing money to the bank.

This was the scene when investors worldwide lost money. But question arises what lead to the prices fall close to the settlement date? Doest it raise questios? Was it a conspiracy? Who benefitted?

Lets take a look at some of the major events that happened before this Oil Crash:-

Chinese Corona Virus spread was it its peak around the world.

Even the news of UK Prime Minister Boris Johnson also getting infected circulated. Though later the test result for his Chinese Wuhan Virus COVID-19 turned out to be negative.

Around the world billions of people are affected by one of the worst health crises of the past century. The global economy is under pressure in ways not seen since the Great Depression in the 1930s; businesses are failing and unemployment is surging. Confinement measures are in place in 187 countries and territories, and although they vary in scope, activity in the transportation sector has fallen dramatically almost everywhere.

Many Countries announced total lock down starting from mid of March. Many countries banned all commercial and domestic flights and halted all rail and road traffic and enforced social distancing. In big countries like US and India that are among some of the biggest consumers of Oil, the consumption of the oil fell to a great extent since all the economies were brought to a complete standstill and there was no traffic on the roads, nor any vehicles plying on the road that consume a lot of petrol/diesel. All the manufacturing companies were also closed. There was virtually no consumption of oil starting a month before the day of the Oil Market Crash i.e. 20th April 2020.

All countries expected the infection could get controlled. However Chinese social media handles started planting stories of second wave of Chinese Wuhan Coronavirus.

To everyone’s surprise, Twitter, Facebook, YouTube etc are all banned in China. Then who were these social media handles from China that were spreading rumors ad planting stories of second wave of Chinese Wuhan Coronavirus in China in early April 2020?

Different media houses started gloomy predictions about the future. Even the WHO was doing the Chinese Propaganda at its peak. We covered about it in our previous article WHO – World Health Organization Or China’s Lap Dog?

Global oil demand is expected to fall by a record 9.3 mb/d year-on-year in 2020. The impact of containment measures in 187 countries and territories has been to bring mobility almost to a halt. Demand in April is estimated to be 29 mb/d lower than a year ago, down to a level last seen in 1995. For 2Q20, demand is expected to be 23.1 mb/d below year-ago levels. The recovery in 2H20 will be gradual; in December demand will still be down 2.7 mb/d y-o-y.

Early data show China’s implied stock build in 1Q20 at 2.1 mb/d, and US stocks increased by 0.5 mb/d. OECD data show that industry stocks in February fell by 35.4 mb to 2 878 mb as a draw for products more than offset a build in crude. Total OECD oil stocks stood 42.4 mb below the five-year average and, due to the weak outlook, now provide 79.2 days of forward demand coverage. In March, floating storage of crude oil increased by 22.9 mb (0.7 mb/d) to 103.1 mb.

Twin demand and supply shocks caused oil futures prices to fall by 40% in March. Brent has recovered modestly from an 18-year low as producers reached agreement to curtail output and is trading at $31/bbl. Weak demand pushed prices for crude grades such as WTI Midland and West Canadian Select below $10/bbl. Cracks for gasoline and jet fuel continued to suffer as containment measures were introduced.

Even assuming that travel restrictions are eased in the second half of the year, we expect that global oil demand in 2020 will fall by 9.3 million barrels a day (mb/d) versus 2019, erasing almost a decade of growth.

oil producers in the OPEC+ group agreed to cut output by an initial 9.7 mb/d versus their agreed baseline

While the Leftist/Liberal Media all over the world that was incluenced by China was reporting gloomy future, amidst all these reports China was also sending out the messages that it does not have storage facilities and sent out the negative messages as well.

While the rest of the world is tentatively coming out of lockdowns, China is taking advantage of the cheapest crude oil in years to stock up as demand is starting to return in the world’s largest oil importer as per the tanker-tracking data. At present, a total of 117 very large crude carriers (VLCCs) – each capable of shipping 2 million barrels of oil – are traveling to China for unloading at its ports between the middle of May and the middle of August. If those supertankers transport standard-size crude oil cargoes, it could mean that China expects at least 230 million barrels of oil over the next three months.

The fleet en route to China could be the largest number of supertankers traveling to the world’s top oil importer at one time, ever.

Many of the crude oil cargoes are likely to have been bought in April, when prices were lower than the current price and when WTI Crude futures even dipped into negative territory for a day.

In April 2020, emerging from the coronavirus lockdown, China’s oil refiners were already buying ultra-cheap spot cargoes from Alaska, Canada, and Brazil, taking advantage of the deep discounts at which many crude grades were being offered to China with non-existent demand elsewhere.

China was also estimated to have doubled the fill rate at its strategic and commercial inventories in Q1 2020, taking advantage of the low oil prices and somewhat supporting the oil market amid crashing demand by diverting more imports to storage, rather than outright slashing crude imports.

China first spread the virus to bring the whole world economy to a standstill. Thereafter through leftist/liberal main stream media outlets worldwide, spread more gloomy picture of the future. At the time when countries enforced lock down and the demand fell, OPEC+countries had to need buyer to continue pumping the oil.

At that stage China stepped in as a savior of the OPEC+countries by buying their Oil at minus $40 per barrel. Yes correct -40 (Minus 40) USD was the price of the oil per barrel that the OPEC+countries were ready to sell the oil to avoid shutting down their oil pumping.

Related Article : Chinks In The Armory – Are The Chinese Looking A Bit Rattled From The Chinese Corona Virus COVID-19 Disaster?

The result is in front of the world. Out of 53 countries, almost all the OPEC+countries supported China over the China’s new national security law in Hong Kong during the 44th session of the United Nations Human Rights Council. Check the list of the countries and as mentioned, they included Bahrain, Iran, Iraq, Kuwait, Oman, Saudi Arabia, UAE, Venezuela, Algeria, Yemen, Gabon, Equatorial Guinea, Congo.

Anger against China in the whole world

First of all China is responsible for 550,000 deaths of innocent Civilians worldwide by spreading Chinese Wuhan Corona Virus. China brought the whole world economy to standstill. Further Communist Chinese CCP manipulates International Liberal/Leftist main stream media to its own advantage to bring the world economy to its knees. Then China takes advantage of the fallen prices and buys huge oil stocks at -40 USD per barrel. It is as good as free of cost.

Will the International Community join and start trials against China? Will Economic and trade sanctions be placed against China so that China cannot benefit from the offence it has committed against all humanity and all nations?

Will their be an oil and trade embargo against China that prevents any ships going to China? Will there be a complete ban of Imports and Exports to this Bio-Terrorist Chinese CCP ruled China?