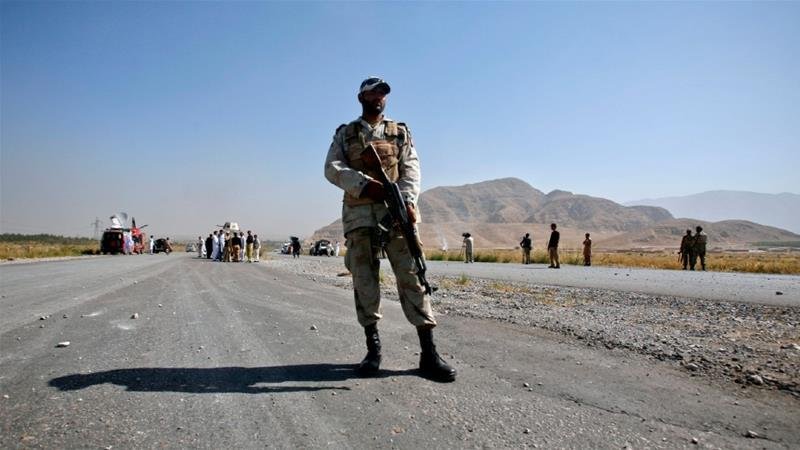 Among those killed is one Pakistan Army Major Junaid who was leading the convoy. Freedom Fighters safely escaped from the scene.

In Tuesday’s incident, five vehicles were targeted in the Gichak area, about 400km south of the Occupied Balochistan’s capital Quetta.

An unverified twitter account also claimed that one of the Pakistan Army Colonel Mushtaq was also killed in the ambush by the Freedom Fighters. However the claim could not be verified.

One of the Balochistan Freedom Fighters group BLF has claimed responsibility and said 20 including an officer have been killed. Local journalists confirmed the attack, whereas Pakistani authorities have confirmed 8-10 deaths so far. Pakistan Army has the old habit of hiding its dead.

A convoy of five vehicles led by Major Junaid, was on patrol in the mountainous area of ​​Gichk Kahen, on Tuesday morning, when unidentified assailants ambushed it with small and medium weapons.

He further added that the attack damaged all five vehicles and killed more than 20 personnel, including an officer on board. The Pakistani army came under heavy attack for several minutes even a single bullet was not fired from opponents. A few years ago, a BLF attack in the same area killed several army personnel, including a Pakistani colonel named Waheed, whose video went viral, and because of this, all Baloch websites, social media pages and video channels were blocked in Pakistan. Video of today’s attack will be released soon.

After the attack Pakistani forces carried out a massive military operation in the surrounding areas of the spot.

It should be noted that Pakistan Army has been sponsoring Islamist Radical Taliban Terrorists to cause unrest in its neighboring Afghanistan. In Afghanistan, USA lost over 2300 Soldiers while 20,320 American servicemembers have also been wounded in action during the war against Terror. Whole world knows Pakistan is responsible for all the deaths of US Soldiers in Afghanistan because of Pakistan’s secret support to Islamist Radical Taliban Terrorists.

Balochistan Freedom Fighters have been fighting a war of Independence against the occupying Punjabi Pakistan Army. This war of Freedom is going on since decades since Pakistan illegally occupied Balochistan and started Genocide of ethnic Baloch. Pakistan has been disappearing ethnic Baloch people and selling them for live Organ Harvesting and exterminating them. We have covered it in details in our previous article

Freedom Fighter groups have waged a guerilla campaign in Balochistan, the country’s largest and the Natural Resources rich province, for years, targeting security forces, government installations and projects associated with the $60bn China-Pakistan Economic Corridor. As everyone knows Pakistan has exploited Natural resources of Balochistan while the owners of the land are forced to live in poverty.

Violence by Baloch freedom fighter groups has increased in the last year, with security forces among targets.

Freedom Fighter groups have demanded independence for ethnically Baloch areas of Balochistan, accusing the Pakistani government of extracting the province’s rich natural resources while not investing in the people of the province.

Will Pakistan stop disappearing of innocent civilians from Balochistan villages and stop killing them for Organ Harvesting?

Will Balochistan Freedom Fighters be able to throw away the Pakistani and Chinese companies that are exploiting Balochistan for its over $1 Trillion Natural resources?

Will International Community give its support to Balochistan Freedom Fighters and help create a free and Independent nation of Balochistan that is secular and marks an end of the Radical Islamist Terrorist Nation Punjabi Pakistan?