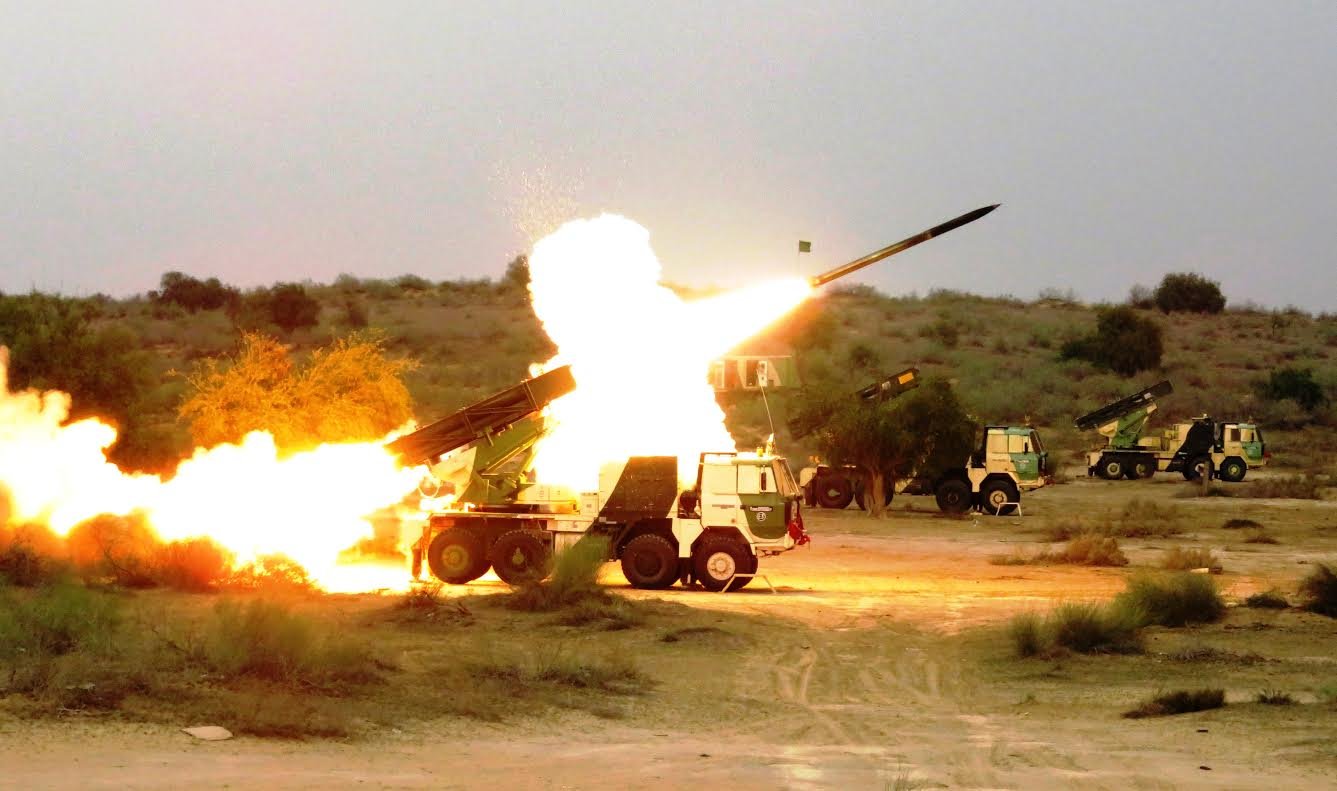 Indian Weapon Systems is the new series we started to let our readers know about strengths of India. At a time when China is flexing muscles for land grabbing in Union Territory of Ladakh and Pakistan is ready to jump in the two front war, India has to look at the readily available options in its inventory and the ones that can be quickly mass produced in its large Ordinance Factories or with Private Participation. We bring to you information about Pinaka Multibarrel Rocket Launch (MBRL) System.

Pinaka is a multibarrel rocket launch (MBRL) system used by the Indian Army. It was developed by the Defence Research and Development Organisation (DRDO). Pinaka integrates state-of-the-art technologies for delivering superior combat performance.

Pinaka is currently produced at an average rate of 1,000 rockets a year at one of the Ordnance Factory in India. The Ministry of Defence plans to increase the output of the rocket by commencing production at another Ordnance Factory in another Indian state.

In March 2006, the Indian Army placed a $45m contract with Tata Power SED and Larsen & Toubro to deliver 40 Pinaka MRBLs. The performance and firing capabilities of the launcher were presented in June 1996. Phase one user trials of Pinaka were carried out in June 1997. The phase two trials began in July 1998.

The combat capabilities of Pinaka MBRL were tested during the Kargil war in June 1999. The maiden Pinaka MBRL regiment was set up in February 2000. Development trials of Pinaka were conducted at the Chandan firing range in Pokhran in September 2012.

The Pinaka system is based on the 8×8 vehicle. Each battery is composed of six launcher vehicles, six loader-cum replenishment vehicles and two command post vehicles. Each launcher vehicle carries two pods, housing a total of 12 rockets.

Each Pinaka MK-1 rocket is capable of carrying a 100kg payload for a range of 40km. A single Pinaka battery can neutralise a surface area of 700m x 500m. The system can engage targets with a circular error probability (CEP) of one to two percent of range. The initial version of weapon system was called Mark I (MK-1), which had a range of 40 km. The upgraded version or Pinaka Mark II has an extended range of 70 to 80 km. Another version MK-3 is under development that can carry warhead of 250kg or a range of 120km.

The launch system of Pinaka consists of two pods mounted side-by-side. Each pod houses six launcher tubes made of E-glass / epoxy composite materials. The pods are loaded / unloaded into the launcher vehicle by a loader crane mounted on the replenishment vehicle. The launch system can fire a salvo of 12 rockets within 40 seconds. The launcher traverses 90° left / right from the centreline and can elevate up to 55°.

The remote mode allows the operator to control the launcher from a distance of about 200m using a remote control unit. The manual mode is adapted in the event of microprocessor failure and loss of power.

The deliveries of Sigma 30 systems were concluded in June 2010. The systems were integrated into Pinaka by Tata Power SED and Larsen & Toubro.

The Sigma 30 is based on the laser gyro land navigation technology. It was specially designed for high-precision firing of warhead rockets by artillery and rocket launchers.

The propulsion is provided by High-Energy Composite (HEC) propellants. The motor tubes made of high intensity steel are seamed with silica-phenolic materials for resisting higher flame temperatures. The optimised nozzle design ensures a very high thrust.

The pre-fragmented warhead is used to inflict 25% to 30% more damage than the conventional warhead.

The 210 mm caliber also lends itself to being nuclearized if needed.

The Pinaka launcher system is mounted on the Indian indigenously built TATRA/BEML 8×8 vehicle. The vehicle can carry a payload of 12t. It is equipped with an on-board generator supplying primary power for launcher operations. Other equipment aboard the vehicle includes a microprocessor-based thyristor power unit, a joy stick controller and a manual back-up.

Recently on 19-December 2019, a test firing of the Pinaka was carried out using an operational launcher. Daily Pakistan has this to say “Pinaka is an artillery missile system capable of destroying 900 square metres at a 20-80 kilometre range by firing a salvo of 12 rockets within 48 seconds. The Pinaka Mk-II rocket is modified as a missile by integrating with the navigation, control and guidance system to improve the end accuracy and enhance the range. It is believed that the guided version of the Pinaka system is being developed in order to deliver nuclear warheads at short ranges”. They are clearly worried. They forgot to add that Pinaka also has a range of deadly warheads – anti tank, anti-personal and incendiary.

Use Cases where Indian Pinaka MBRL can be effectively used

Lt General PR Shankar (Retired), India expresses his views, “Long range artillery aided with precision can be a suitable complement for air-power and lack of fighter sqns of the Indian Air Force (IAF). The precision and low cost should be enough for us to procure the same. The precision element included in long range rockets will also moderate the myth of rockets being area weapon with limited use due to higher collateral damage, especially in times when collateral damage is frowned upon. Pinaka is a better system than Smerch rockets in its ability to be upgraded and having latest technologies, more importantly, indigenously developed. Thus, the need of hour is to go in for long range precise rocket artillery which can swing across the bandwidth of gun artillery at one end and complementary to air-power at another thus reducing need of guns for contact battle and freeing up air-power for air superiority”

Trends and Developments in USA

In the United States Army Futures Command has six modernization programs. The top priority program is Long Range Precision Fires. Extending range of GMLRS is part of this high priority program. There is an emerging worldwide trend of increasing standoff range through Artillery with a high degree of lethality and precision using conventional warheads. There is heavy stress on Non-Contact Warfare as part of Multi Domain Operations.

He further says, “The Pinaka system must be seen in this emerging context. With a range of about 37 km the unguided ammunition can carry out destruction roles in the tactical sphere. With a range of up to 80 km the Guided Pinaka can carry out tasks in the operational depth. The accuracy of the system enables surgical strikes to be carried out. For instance, the Balakot strike (Indian Air Force IAF carried out surgical strikes of Terrorist hideouts inside Pakistan territory) could well have been carried out by a Pinaka launcher with equal effect and less fuss. In conventional scenarios it will enable deterrence, interdiction and dislocation through its plethora of warheads – anti pers, anti-tank and incendiary. The 210 mm caliber also lends itself to being nuclearized if needed. Internationally there is clear understanding that guided Artillery with extended ranges combined with unmanned systems will provide great complementarity to air delivery of firepower. Artillery engagements lend themselves to better control of escalatory dynamics. There are also circumstances when air operations are not possible. These circumstances could be political in nature, dense air defense environment or simply inability to fly due to vagaries of weather. Cost effectiveness also plays a part. Overall it emerges that the Pinaka system can be employed in multiple roles. In fact, its role is very much like a midfielder in football and a middle order batsman in cricket. Anyone who has played these games will know that control of the midfield field/order is often the difference between victory and defeat. The Pinaka is similar. It is a weapon system which allows the operational commander to control the midfield battle. As non-contact battle becomes the norm, the midfield assumes greater importance.”

In Indian context, the Chinese Border is inaccessible in many places due to poor road infrastructure. In such places it is out of reach of conventional tube Artillery either due to range or mobility factors or both. The only way to fire across the LAC in many places is by long range guided rocket Artillery with any degree of certainty. In case India must deter China by “Denial” they need to have credible and accurate long-range fire capability. This capability should be available in adequate quantity for simultaneous and nonlinear engagement effectively. This means devastating multi layered fires delivered from a compact of tube artillery, rocket artillery, cruise missiles and fighter aircraft. Further, in Himalayas, air operations are fickle since they are dictated by weather conditions. Hence reliance on long range guided rocket systems for depth engagements and interdiction will be high. The key for effective deterrence will be long range guided rocket artillery in the form of PINAKA.

Against Pakistan India need to practice deterrence by “Punishment”. To execute such a game plan, India needs to have a capability to cause damage in depth by conventional methods whilst keeping the fragile Indo-Pak escalatory dynamics in view. Further India needs to have a counter battery ability to destroy the much-touted NASR which has a nuclear tip. India simply need to hunt for the NASRs. The overall stance against Pakistan should be a declared conventional capability with an implied nuclear capability. The key for this again lies with an effective long-range guided rocket system – PINAKA.

To this end a credible non-contact fire capability compact is being put in place with the induction Rafale in addition to the existing SU 30s, the Brahmos, the Pinaka MBRL and a of a slew of 155 mm Guns like the ULH, Dhanush, K9 Vajra and Sarang. This is in consonance with the line of thought outlined earlier – credible firepower in depth to have a non-contact deterrence capability deep into adversary territory. While there is clarity on the rest of the systems, it is the Pinaka MBRL, India’s emerging strength which needs a sharper focus.

Again, very importantly, the Defence Research and Development Organisation (DRDO) has a strong programme underway to extend the range of this rocket. Initial trials have been encouraging. Both systems will change certain perceptions of Indian adversaries. They need to look out.