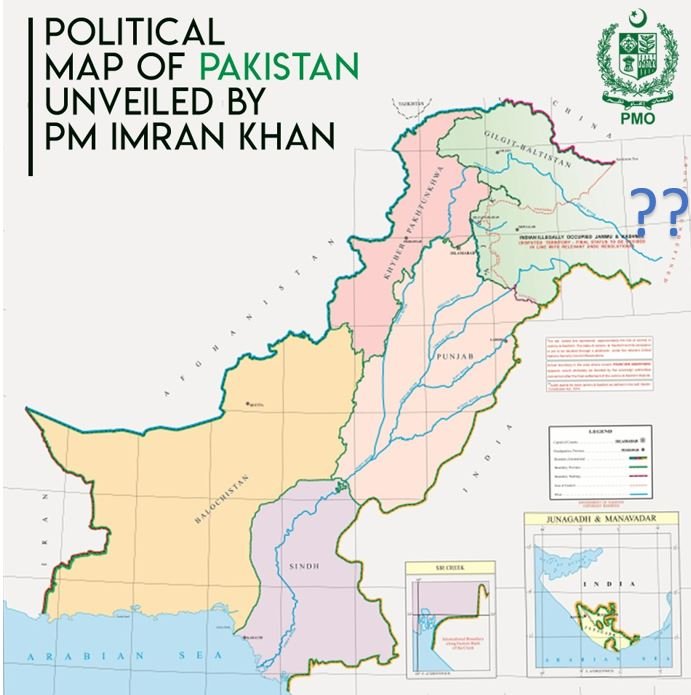 After Kashmir Failure, Pakistan remembers Junagadh issue again after decades and declares Jammu & Kashmir, excluding Chinese controlled Aksai Chin and Shaksgam as a part of Pakistan in its wet dreams in retaliation to India removing Article 370 on its first anniversary.

After a complete failure in projecting the Pakistani position over Kashmir, it has now surfaced that Pakistan has laid claims to Junagadh – rather than calling it Pakistan has laid claims to Junagadh, it is much better to say someone close to Pakistani Government found some old maps which showed Junagadh as a part of Pakistan and decided to reuse the old maps.

On the other hand, betraying it’s true colours, Pakistan has ditched it’s Kashmir for Kashmiris stand by including the whole of the erstwhile province of Jammu and Kashmir excluding the Chinese controlled Aksai Chin and Shaksgam as a part of Pakistan.

It is important to note that, not in a position to offend China, the map doesn’t lay claim to Aksai Chin and Shaksgam which is actually a part of the erstwhile Kingdom of Jammu and Kashmir which Pakistan claims in toto. This development comes immediately after Pakistan renaming Kashmir Highway in Islamabad as Srinagar Highway.

As it stands, this seems to be Pakistan’s answer to the anniversary for India normalising life in Kashmir Valley by removing Article 370 which blocked all avenues of job creation in Kashmir and was one of the main reasons for spread of terrorism in Kashmir.

Junagadh issue is not new. In fact, it’s an old and forgotten one. There are sufficient number of Pakistani official documents which show that Junagadh is a part of Pakistan though the need to have Junagadh in it’s maps faded away with time.

As the story goes, with the instigation of Shah Nawaz Bhutto, a Sindhi politician and the then Diwan convinced the Babi of Junagadh, Muhammad Mahabat Khanji III to accede to Pakistan which he did on 15 August 1947 through a government gazette claiming that Junagadh is contiguous with Pakistan through sea, an argument already rejected by Mountbatten, Sardar Patel and others. Babriwad and Mangrol areas of Junagadh rejected the accession and joined India. However, the ruler of Mangrol withdrew his accession and followed his master.

India in return demanded for a referendum in Junagadh. The natives of Junagadh who are not happy with the stand of their ruler created a provisional government and asked Samaldas Gandhi, a native of Junagadh to head it. By virtue of the highly fragmented nature of Junagadh’s geography,

India allowed the Provisional Government(Arzi Hukumat) to take charge of the territories over which Junagadh Government wasn’t able to exercise any control. Soon, it became hard for the government to function and the Babi of Junagadh fled to Pakistan followed by his Prime Minister.

Sir Mahabat Khanji, his family (including his dogs), and his dewan (prime minister), Sir Shah Nawaz Bhutto, fled by plane to Pakistan on 24 October, never to return. Reportedly one of his begums and her child were left behind in the chaotic escape – Wikipedia

India assumed charge of the territory by 9 November 1947 to establish order. The same was duly notified to Pakistan, which Pakistan rejected. Subsequently, a referendum was held on 20 February 1948 in which all but 91 out of 190,870 (from an electorate of 201,457) voted for India. Pakistan, as usual, rejected the plebiscite and still lays claim to the land.

A vassal of Junagadh, Bantva Mandavar is also claimed by Pakistan for the same reason.

Due to the impracticality of Pakistan’s stand, Pakistan’s claims over Junagadh died down in due time, though Pakistan legally lays claims to Junagadh and Mandavar. But Pakistan raising it’s claims over a Hindu majority territory which it has no hopes to regain only betrays it’s cluelessness and desperation to stay in news after it has became irrelevant in the global arena.

In fact, there is no strategic advantage for Pakistan to lay claim to Junagadh. It is as good as Pakistan laying claim to Pyongyang or Mecca. Rather than helping Pakistan’s cause, while it has made Pakistan a bigger joke than what it is today, it has created a new trouble for Pakistan – what if Bilawal Bhutto, the great-grandson of Shah Nawaz Bhutto and the heir to his legacy demands Pakistan to annex Junagadh from India? Are Imran Khan and Qamar Bajwa really in a position to launch a war against India to capture Junagadh? Or is this going to be a just another idle boast as like Imran Khan’s public acceptance that Pakistan can’t alter the status quo in Kashmir militarily? Rather than uniting Pakistan, here we are seeing a potential rupture in the political establishment – with each party using Junagadh to further it’s own political agenda.

What exactly is Pakistan planning to do by issuing a new map it has no hope to realize?

If Bilawal Bhutto calls Junagadh an ancestral legacy and says Pakistan betrayed his great-grandfather, will Pakistan attempt to invade India to liberate Junagadh?

How is Pakistan proposing to manage the territorially fragmented erstwhile kingdom of Junagadh?

How will Pakistan claiming Junagadh and not claiming Aksai Chin and Shaksgam impact the Kashmir discussion?

Should India start Claiming Sindh and Balochistan as part of India?