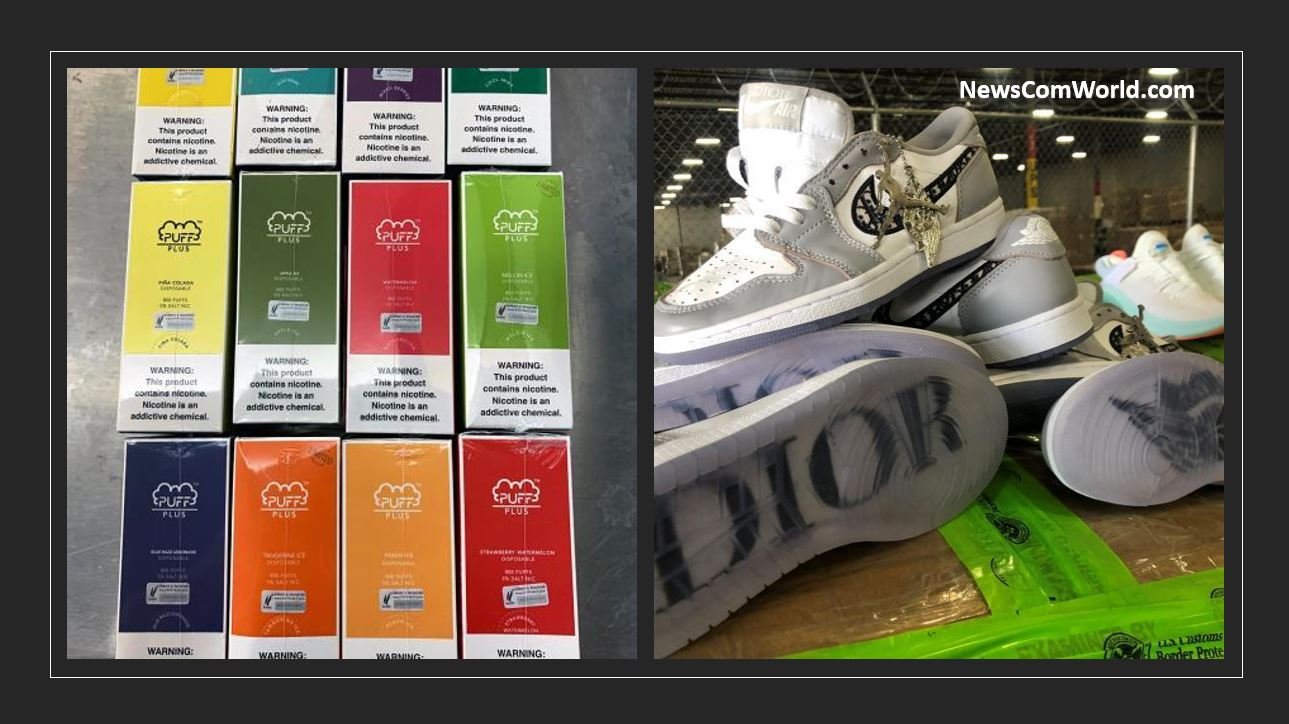 Everything Fake is Made in China. From counterfeit sneakers to fake belts to counterfeit smartphones, companies are losing Billions of Dollars. Most of the times China smuggles these counterfeit goods are made with Forced Labor.

At least 80,000 Uyghurs were transferred out of Xinjiang and assigned to factories under conditions that strongly suggest forced labor in a range of supply chains including electronics, textiles, and automotives under a central government policy known as ‘Xinjiang Aid’. 27 factories in nine Chinese provinces were recently identified that are using Uyghur labor transferred from Xinjiang since 2017, some of them were sent directly from detention camps.

As per a statement by U.S. Customs and Border Police (CBP), “CBP is committed to identifying and preventing products made by forced labor from entering the United States to maintain a level playing field for U.S. domestic industry. CBP receives allegations of forced labor from a variety of sources, including from the public.  Any person or organization that has reason to believe merchandise imported into the United States was produced with forced labor can report detailed allegations by contacting CBP through the e-Allegations Online Trade Violation Reporting System or by calling 1-800-BE-ALERT.”

It is duty of Customs and Border Police in every country to learn from the seizure of counterfeit products of known brands originating from Chinese and learn the modus operandi and check each and every container with extra care as they are dealing with International Smuggling Gangs.

Those companies that lined up for setting up their manufacturing facilities in China didn’t know they are hitting their own foot by sending manufacturing to China as they themselves will be the losers because for every genuine product, the manufacturers are also producing off the record counterfeit products with similar or inferior materials and using the same trademarks.

Especially after the current Chinese Bio-Weapon attack on the world using Chinese Corona Virus that has killed over 820,000 civilians worldwide, many countries have taken a tough stand against China. Earlier China was smuggling counterfiet goods, drugs, weapons into United States with impunity using its large smuggling network spread across the world that is controlled via Chinese Embasies and Consulates in all major cities of the world with Chinese Intelligence supported by Chinese Communist PLA and its associates. Now with the focus of the world shifting to China, a little extra caution by U.S. Customs and Border Protection (CBP) has revealed multiple Chinese Consinments of Fake Goods that were caught by the CBP entering United States.

We covered several such siezures of Counterfiet goods made by China of known US brands in our previous article Everything Fake is Made in China: Companies Losing Billions of Dollars.

Similar checks have also been initiated by Customs and Costal Guards of many countries. This has sent a message to the chinese that they no longer enjoy the free pass to dump fake and counterfeit goods into any country and descrete the religious minorities of Buddhists, Christians, Muslims (Uyghurs), Hindus and other religions, use their followers as forced labour and earn foreign exchange causing loss of Billions of Dollars to the foreign brand holders.

Each year, U.S. Customs and Border Protection (CBP) seizes all kinds of counterfeit products from originating from China and Hong Kong. Counterfeiters look to make profits by making fake versions of the hottest products as soon they are available on the market. Each time a person buys a counterfeit product originating from China or Hong Kong, a legitimate company loses revenue. This translates to lost profits and U.S. jobs over time.

Related Article China Is The Biggest Drug Peddler In The World : Fentanyl Killed 100,000 People In US Alone In A Year – Report

On 10-August 2020, U.S. Customs and Border Protection officers working at the Dallas/Fort Worth port of entry seized a shipment of counterfeit footwear including several pairs of limited edition basketball shoes that retails for $2,000 per pair.

CBP officers targeted 60 boxes that originated from Hong Kong and were manifested as “Ball Golf” for an exam. This inspection revealed several styles of footwear bearing the registered trademarks of Nike and Adidas. Due to the poor quality of workmanship, incorrect packaging, and previous experience with similar products, officers determined the footwear were not authentic items.

“Counterfeiters trafficking in phony merchandise are not concerned about the American consumer or the damage their fake goods can do to our economy,” said CBP Port Director Timothy Lemaux. “CBP will continue to take every opportunity to intercept illegitimate goods and disrupt transnational criminal enterprises seeking to fund criminal activities with counterfeit or pirated merchandise.”

Related Article Bio-Weapon Smuggling by China: US Customs Seizes Half Ton of Salmonella-Laced Kratom, a group of bacteria that can cause gastrointestinal illness and fever called salmonellosis

CBP contacted the various trademark holders for merchandise verification, and the shipment’s consignee was given an opportunity to submit proof of Trademark Licensing before CBP seized the shipment.

In fiscal year 2019, Department of Homeland Security agencies seized counterfeit footwear for intellectual property rights that recorded an MSRP of more than $37 million. The National IPR Coordination Center has more information about IPR including counterfeiting and piracy.

U.S. Customs and Border Protection (CBP) officers at the Port of Philadelphia and the Port of Pittsburgh have been seizing counterfeit and unapproved vaping products since June, racking up 48 combined seizures worth an estimated $444,000.

According to the U.S. Food and Drug Administration (FDA), tobacco products imported or offered for import into the United States must comply with all applicable requirements under the Federal Food, Drug, and Cosmetic Act (FD&C Act), as amended by the Family Smoking Prevention and Tobacco Control Act (Tobacco Control Act). In April, the FDA issued new enforcement priorities that regulate the unauthorized importation of flavored cartridge-based e-cigarettes.

The CBP e-cigarette pod seizures span from June 5 through August 11. CBP’s Port of Pittsburgh seized 40 shipments of e-cigarettes that were destined to addresses in Allegheny, Beaver and Mercer Counties. The shipments collectively included 28,138 e-cigarette pods under brand names Bidi, Pop, and Puff, and had a combined value of $206,973.

CBP’s Port of Philadelphia seized eight shipments of e-cigarettes that were destined to addresses in Bucks, Chester and Delaware Counties. Collectively, the shipments included 30,400 e-cigarette pods under brand names Eonsmoke, Pop, Puff, and St!k, and had a combined value of $236,881.

All e-cigarettes were shipped from either China or Hong Kong. All of the e-cigarette products were destroyed.

“Counterfeit and unapproved vaping products pose a very serious health concern to users as they are likely manufactured in unregulated facilities with unverified ingredients,” said Casey Durst, Director of Field Operations for CBP’s Baltimore Field Office. “Customs and Border Protection’s trade enforcement mission places a significant emphasis on intercepting illicit products that could harm American consumers, and we will continue to work with our consumer safety partners to identify and seize unsafe and illicit goods.”

Cincinnati CBP Seizes $374,000 Worth of Fake Phone Cases and Fronts

On 14-August 2020, U.S. Customs and Border Protection (CBP) officers in Cincinnati seized 7,500 counterfeit phone cases and 2,040 counterfeit phone fronts from three shipments at local cargo facilities. The fake items came from China and would have been worth a total of $374,020 had they been genuine.

The phone cases and fronts were labeled as Apple and Samsung, with black tape placed over the brand name in an attempt to circumvent a complete inspection. Additionally, the shipments were manifested as “Plastic LCD” with listed values below $500 per shipment.

The shipments were destined to individuals in El Salvador and Laredo, Texas.

CBP has established an educational initiative to raise consumer awareness about the consequences and dangers that are often associated with the purchase of counterfeit and pirated goods.

Related Article US Customs Seize 13-Ton Shipment of Human Hair Weaves, Believed to Have Been Cut From Prisoners in Chinese Internment Camps

Post the Bio-Terrorism unleashed by China on the entire world, why is the rest of the world still allowing Chinese Goods into their borders. Why can’t there be trade sanctions and embargoes on China until they pay compensation to the entire world for over 820,000 innocent civilians China has killed using Chinese Coronavirus?