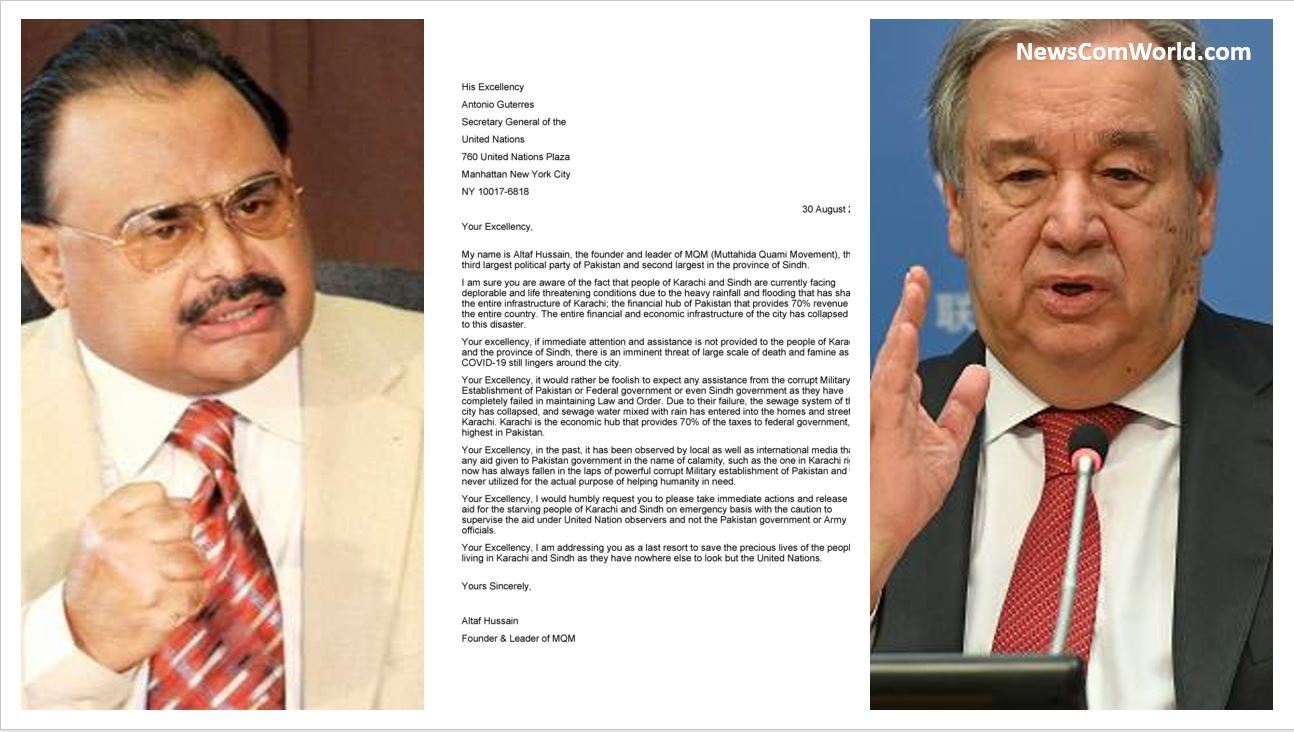 Leader of Pakistan Occupied Sindhudesh Altaf Hussain has sent a SOS message to UN Secretary General to save Sindh from exploitation by Pakistan and China.

Founder and leader of MQM, Altaf Hussain has SOS (Save Our Soil) appeal to the UN secretary-general Antonio Guterres to save salvage Sindh province and the people of Karachi and rest of Sindh who is facing deplorable and life-threatening condition due to heavy rainfall and flood.

In his latest letter to the UN Secretary-General, Hussain said that heavy rain and flood has shaken the entire infrastructure of Karachi; the financial hub of Pakistan that provides 70 per cent revenue to the national exchequer which is the highest rate in Pakistan. The entire financial and economic infrastructure of the city has been collapsed due to this disaster.

Hussain said that if immediate attention and assistance is not provided to the people of Karachi and the other part of the province of Sindh, there is an imminent threat of large scale of death and famine as Covid-19 still lingers around the city.

He further said that it would rather be foolish to expect any assistance from the corrupt Military Establishment of Pakistan, the Federal government or even Sindh government as they have completely failed in maintaining law & order. Due to their failure, the sewage water mixed with rain and entered into the homes and streets of Karachi.

Hussain said that in the past; it has been observed by local and international media that any aid given to Pakistan in the name of calamity, such as the one in Karachi right now has always fallen in the pockets of powerful corrupt Military establishment of Pakistan and was never utilized for the actual purpose of helping humanity in need.

Hussain humbly requested to the UN Secretary-General to take immediate actions and release aid for the starving people of Karachi and Sindh on an emergency basis with the caution to supervise the aid under United Nations observers and not the Pakistan government and Army officials.

“I am addressing you as a last resort to save the precious lives of the people living in Karachi and Sindh as they have nowhere else to look but the United Nations,” he further said to the UN Secretary-General.

Here is a copy of the letter from the Leader of Pakistan Occupied Sindhudesh Altaf Hussain’s SOS Message to UN Secretary General to Save Sindh :-

Here is the tweet from the leader of Mohajirs and Sindhis Altaf Hussain.

In another message on social media, Leader of Pakistan Occupied Sindhudesh Altaf Hussain tweeted, “Devastation in #Karachi is in fact part of nexus between China & Army. Purpose is to hand over Karachi to #China under the guise of construction Drainage blocked with sacks River banks broken Human conspiracy is being termed as Divine torment. Those who are eating up Khi, are blaming God.”

He further tweeted in Urdu on twitter regarding Pakistan-China Conspiracy. English Translation of the tweet reads, “The flood devastation in Karachi is in fact part of a nexus between China and the Pakistan Army. The purpose is to hand over Karachi to China under the guise of construction. Karachi Kono Ch Noch Karkhanwala! Don’t blame God.”

Last year also the rains caused a havoc on Sindh. We covered it in details in our previous article Corrupt Imran Khan Arrogant K-Electric Electrocuted 37 People in Karachi, Sindh. Because of the corruption in the Pakistan Government and over-exploitation of Karachi, 37 civilians lost their lives in different incidents of electrocution.

After torrential rainstorm hit the Karachi city last year, it led to days-long power outages and flooding on major access roads, streets as well as in the drainage system. Sewerage system was clogged with garbage. Streets and roads were already filled with years of garbage. Pakistan then celebrated Eid-ul-Azha (Animal slaughtering festival). As the remains and tripe (Leftovers after slaughtering animals) were left behind on the streets, there are heaps of garbage collected on the streets and roadsides. The blood-filled streets, along with clogged sewerage and rain water, tripe of animals lying on the streets, no garbage collection taking place, no fumigation place, worked as a perfect breeding ground for flies. Swarms of flies were seen last year all over Karachi. We covered it in details as well in our previous article Flies Infestation in Karachi – Waiting to beg money from Donors in the event of Epidemic?

On one hand Pakistan is demonstrating aggression on Afghanistan as well as India borders by continuously firing using Rockets and Artillery shells. Pakistan has failed at economic front. However in order to divert the attention of its public, Pakistan has started Jihad rhetoric and infiltrating Radical Islamist Terrorists in India to spread terror and kill innocent civilians.

Does corrupt Imran Khan government care for Sindhis and Muhajirs in Karachi? Will the Sindhis and Muhajirs continue to be exploited by successive regimes of Punjabi dominated Pakistan? With no job opportunities being created, Industry coming to a standstill, with no investments coming and with no income, how will the people of Karachi pay astronomically high electricity bills? With people losing their children to electrocution during rainy season, will the families of the victims get compensation?

Pakistan has adopted the state policy of promoting Terrorism. Terrorists and Islamist Radical groups brought in from Punjab and other places and settled in Karachi, destroying the culture of Sindhis and Muhajirs. Political leaders like Altaaf Hussain who founded MQM, are forced to live in exile in UK. People of Sindh have no solution in view except to demand freedom from the repressive Punjabi Pakistan.