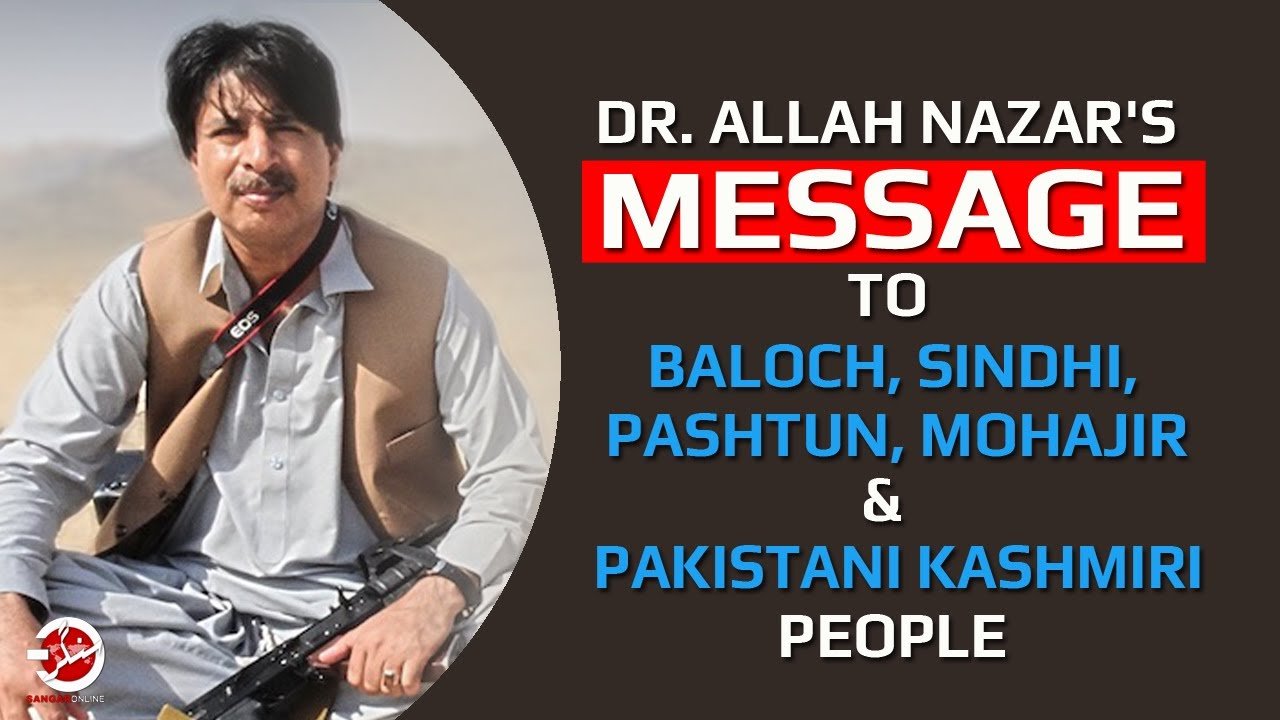 Balochistan Freedom Fighter Dr Allah Nazar in an Interview to the local newspaper Daily Sangar called for unity among Baloch, Sindhi, Mohajir, Pashtuns and Kashmiris to get rid of Punjabi Pakistan’s Imperialism.

Baloch nationalist leader Dr Allah Nazar Baloch said in a statement recently given to the local newspaper Daily Sangar said that the Baloch, Sindhi, Pakhtun (Pashtun) and sub-Kashmiri people of Pakistan and the Muhajirs who believe in Sindhudesh should set up a common platform to get rid of Punjabi imperialism. Because Pakistan is not a state but a source of terrorism in the world and a center of atrocities on oppressed nations. Pakistan own the state does not meet the needs of a state, but has occupied the lands of the Baloch, Sindhi and Pakhtun (Pashtun) nations and is exploiting their resources.

Pakistan’s presence on the world map means the presence of terrorism and chaos in the world. As long as this state is established and exists in this way, development, prosperity and peace and stability in the region and the world will remain a dream. The whole world, including Baloch, Sindhi and Pakhtun, will not be able to get rid of terrorism and religious fanaticism.

Dr. Allah Nazar Baloch said that all the political parties in Pakistan do wail according to the intention of the Establishment but the program of one of them does not include the salvation of nations. They want the army to occupy the lands of the oppressed nations, they get their share. That is why they sometimes talk about the federation. But even this verbal statement of his does not meet the truth of history. Because federation is formed by the voluntary accession of nations. While Pakistan has been unnaturally occupying the lands of nations and established with the blessings of Western masters. For the Federation, this is nothing but a ridiculous joke with history.

He said that it was time for the Baloch, Sindhi, Pashtun, Mohajir and Pakistan-occupied Kashmiris to struggle on a common platform to get rid of Punjabi imperialism. Struggling on a common platform will not only get rid of Pakistan but also pave the way for peace in the region and the world. Because the source and center of terrorism is Pakistan. Pakistan’s current structure and existence is a threat to the whole world. We subjugated nations are already in the throes of oppression. Today, our children, mothers, sisters and the elderly are being sacrificed for the brutal policies of Pakistan.

Dr. Allah Nazar Baloch said that Pakistan along with the Baloch nation has crossed all the boundaries of oppression in all subjugated and oppressed nations Pashtun Sindhi, Muhajir and Pakistani occupied Kashmir. Picking up people and forcibly disappearing, torturing martyrs in torture cells and throwing mutilated bodies of these martyrs has become a daily routine of the Pakistani army and intelligence agencies.

Dr Allah Nazar Baloch said that Pakistan’s self-made outcry over the Kashmir issue was beyond comprehension, as the Pakistani army’s own hands were stained with the blood of millions of Baloch, Pashtuns and Sindhis. This is Pakistan that has killed three million Bengalis in front of the eyes of the world. Pakistan’s brutal army has raped thousands of Bengali mothers and sisters.

He said that Pakistan was using terrorism as a foreign policy and blackmailing for a supremacy in the region. Is. Pakistan’s policy of intervening and weakening Afghanistan is still going on.

He said that Baloch political leadership has always made it clear to the world that Pakistan is the center of terrorism in the world and especially in the region. With the existence of Pakistan, the dream of peace and security in the world and in the region can never be embarrassing. The sooner the world understands this, the better and more beneficial it is to create a better world.

As rightly pointed out by the brave Balochistan Freedom Fighter Dr Allah Nazar, shouldn’t the International Community also help the freedom Fighters and help eradicating the terrorist producing factory from the world map?

When the International Community recognizes the referendum, Shouldn’t a referendum be held in Balochistan, Sindhudesh and Pashtunistan for Independence from Punjabi Dominated Pakistan?