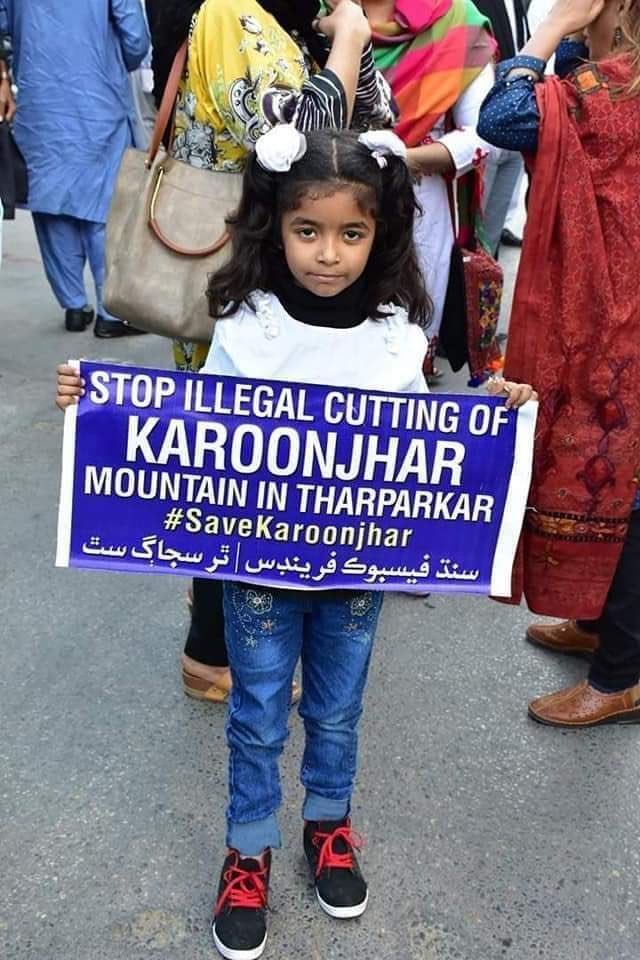 People of Sindh Angry as Karoonjhar Hills in Sindh being sold to Chinese Companies. A campaign is launched to “Save Karoonjhar Save Sindh” by locals.

Karoonjhar range is spread on a total area of 02 lac acres stretching till Indian border, with deposits of 20 Billion tons of special kind of granite and Chinese clay, while a native saying Karoonjhar yields 100 kilogram of gold daily.

These hills are not only precious for Sindhi people but for animals and birds too. The place provides a safe refuge for peacocks, endangered deer, Jackals, wolves and Hyenas, while also boasting a wide variety of Flora and Fauna. In Sindhi folklore, songs and tales of Shaheed Rooplo Kolhi, a prominent identity who fought British army and was hanged here in Karoonjhar are famous.

Karoonjhar Hills are located in Nagarparkar Tharparkar Sindh, a rock formation approximately 5 billion years old with geographical importance and archeological significance of this region. Because of rich history and cultural significance the natives consider these hills a sacred place with 108 ancient historical remains like Jain Godi temple, Bhodesar Talao, Sardaro, Anchlechure, Gao Mukhi, Punraj Gadr, Chandan Gadr and Marvi Jo khooh (water well) etc. Many locals regardless of their religion holds the hills to be very Sacred place. Hindus here consider it to be the second holiest place after the Ganges River and many Hindus perform their funeral/cremation rites “Antyesti” at the Karoonjhar springs.

Some of the Historical Temples in Karoonjhar Hills, located in Nagarparkar Tharparkar

Bhodesar Temples: Bhodesar, 4 miles from Nagar, features the ruins of three Jain temples. The oldest temple was built in the classical style with stones without any mortar, built around the 9th century CE, by a Jain woman named Poni Daharo. It is built on a high platform and reached by a series of steps carved into the rock.

It has beautifully carved huge stone columns and other structural elements. The remaining walls are unstable and partially collapsed. Parts of the building had been dismantled by the locals who used the bricks to construct their homes.

According to the texts, a merchant 500 years ago named Manga Oswal from Nagarparkar had gone to Pattan to purchase some items. He was informed in a dream that an image was buried under the house of a local Muslim that Oswal was instructed to acquire. Oswal bought the image by paying 125 dramma or 500 pieces (taka), and was instructed in another dream to place the image on a cart and to move forward without looking back. The cart is said to have broken down near Nagarparkar, where Oswal then fell asleep. In his next dream, he was informed that underneath him lay marble and treasure, and instructed him to recruit craftsmen to build a fine temple in which to worship the idol, which was bestowed with the name Godi. The temple’s construction was supervised by an architect from Sirohi, while the shikhar of the temple was completed by his son Mahio. The image was formally reconsecrated by Acharya Merutunga Suri of Anchala Gachchha, thus establishing the Godi Parshvanth Tirth, and the temple as a place of pilgrimage for Jains from afar.

Viravah Jain Temples : The Viravah Temples were 3 temples that are located near the town of Viravah, about 15 miles north of Nagarparkar. The site is near the ruins of the ancient seaport of Parinagar on the edge of the Rann of Kutch. The area once had three temples, which are said to have been founded in 456 CE by Jeso Parmāra.

One of the temples was in use during the British era, and is well-preserved and made of white marble. Another temple had a block of finely carved marble which was transferred to the Karachi Museum during the British era. The third ruined temple has 26 small domes surrounding a large central dome measuring 18 feet in diameter. The central dome features fine stone tracing It contains carved stone pillars with carved capitals.

During construction of a nearby road, workers accidentally discovered numerous Jain statues, which were then placed by locals in the remaining abandoned temple, while others were taken to the museum in Umerkot.

Churrio Jabal Durga Mata Temple, on Churrio Jabal hill in Choryo village, is one of the two Hindu temples in this place. On Shivratri 200,000 pilgrims visit the temples. Hindus cremate the dead and ashes are preserved till Shivratri for immersion in the into holy water. a few Pakistani Hindus who can afford, go to India to immerse the ashes in Ganges and the rest majority visit Nagarparkar to immerse the ashes.

This temple was recently vandalized by Islamist Radicals in the region and the idol of the Goddess Durga broken.

Greedily Punjab and Punjabi Generals have always had an eye on lands, Islands and resources of occupied provinces since its creation. Dominant Punjab province has always exploited historical oppressed nation’s assets and natural resources. A looting which has never stopped and continuously increasing because now they have the support of expansionist China. Frontier works organizations (FWO), a Military engineering organization, and one of the major science and technology commands of the Pakistan Army Commissioned was established in 1966. The FWO includes active duty officers and civilian scientists and engineers. Since its establishment, FWO has been credited with the construction of bridges, roads, tunnels, airfields and dams in Pakistan controlling 65% of construction projects of Pakistan private and government.

In November 2019, FWO illegally entered in this historical beautiful valley with 12 Multinational companies mostly Chinese and started extraction of granite from Karoonjhar hill. The area became a no-go area for local people. But when natives watched the loaded trucks carrying out granite they started protests in local cities and a social media campaign was launched to “Save Karoonjhar” in November 2019.

Local people reached police station in city for registration of FIR over granite extraction, however it was refused by authorities because of involvement of Frontier works organizations (FWO) and federal government departments. The local people then reached out to the elected politicians from Pakistan Peoples Party (PPP) of Sindh. However, the local Sindh Politicians, who were the elected representatives also refused to comment or talk about these illegal activities. Finally matter reached to Sindh High Court. A case was filed by local resident of Nagarparkar. A division bench of Sindh High Court, Hyderabad circuit stayed excavation of stones in Karoonjhar hills of Nagarparkar, while issuing notice to federal secretary of natural resources, secretary of forest and wildlife, frontier works organization, secretary of mines and minerals and different marble companies. The Sindh High Court bench also issued notice to the Additional Advocate General and Deputy Attorney General with directives to file comments till next date of hearing. As per court order, respondents were jointly restrained from cutting mountain or moving any minerals from site.

This week Government of Sindh, under rule of Pakistan People’s Party (PPP), a party of corrupt feudal’s and thugs that have always sold Sindh to Punjab for their personal interests and to save their skin, released a notification of the approval to carryout operations of destroying this sacred place and sold the Karoonjhar to Frontier works organization and Chinese companies for their 10% commissions under pressure of the federal government and Pakistan Military.

A mega granite city and factories project is announced by Punjabi Pakistan government authorities in region on 1 lac 50 thousand acres out of total 02 lacs acres area. Already People of Sindh are furious and many protests are held in whole Sindh against illegal ordinance of selling Islands of Sindh to China where mega city projects were announced last month connected with CPEC extension. Now this illegal occupation of Karoonjhar hills is a threat for People of Sindh.

This is not First time that Karoonjhar is under attack by greedy people’s and enemies of nature. The first contract of cutting the stone was issued during the Zia-ul-Haq regime. Then in 2008, after Pervez Musharraf’s departure from power, the ruling Pakistan Peoples Party (PPP) government issued a 20-year lease to a private company.

But in 2011, a notification was issued by the government of Sindh, on behalf of the Director General Mines and Mineral Development. Notification states: “with the approval of the Competent Authority, the Mining lease over an area of 659 acres, out of the already granted area of granite, comprising 2,636 acres, is hereby granted to M/s Kohinoor Marble Industries (Pvt) Ltd.” until 2030. But In 2012, Justice Jawwad S. Khawaja gave directions to the DC Tharparkar that the cutting of stone must be restrained.” But this time the situation is not same as before. People of Sindh are now more worried because of China and Chinese companies presence in “Thar” and their influence on Punjab that is selling Sindh lands, Islands and mountains to China rapidly. After the sale of The Black gold of Thar “Coal” to China, a Project of CPEC has destroyed environment of region already and local people are devastated. Now this new project will bring more suffering for the people of Sindh and it is a clear aggression and exploitation.

Will People of Pakistan Occupied Sindhudesh let the resources of Sindhudesh to be sold by greedy Punjabi Pakistanis to Chinese companies?

Will the sale of Islands, Hills and all the resources in Sindhudesh not accelerate the freedom movement in Sindhudesh for complete freedom from Punjabi Pakistan?