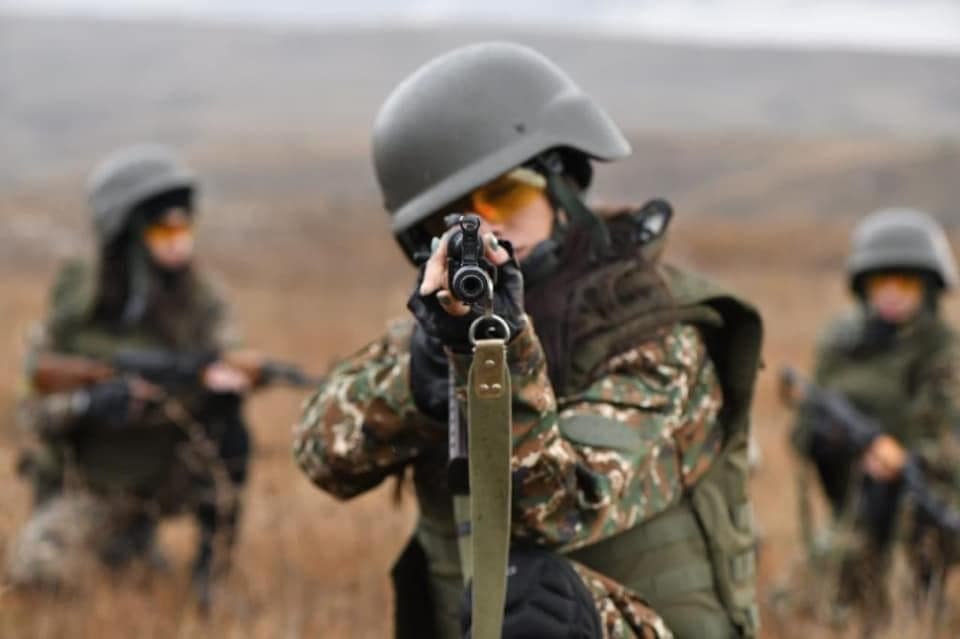 The First lady of Armenia, wife of the Prime Minister, editor-in-chief of The Armenian Times and head of the “My Step” charity Foundation Anna Hakobyan has gone to war front after training with the women’s detachment. The unit is named after the Armenian Queen Erato. The purpose of this detachment of Armenian women is to train all Armenian Women and enable them to defend their homeland and prevent the repeat of Armenian genocide of 1915.

In her Facebook post, Anna Hakobyan yesterday on 7-November 2020 wrote, “When I launched the Women for Peace campaign two years ago, I was sharply criticized by some women. “You are begging for peace”. “We are not a nation begging for peace, we are fighting and struggling, the Armenian woman is strong, she should take up arms if necessary,” they said. I was accused of weakness, persistently ignoring another of my statements. That is, in case of war, I am ready to take up arms and defend our homeland.”

“The message of the Women for Peace campaign was one: we, as women and mothers, must force the political decision-makers to resolve the Karabakh conflict exclusively at the negotiating table, never try to go to war again, endanger the lives of our 18-20-year-old children, their selfless heroism. If they do not push, they will not increase the army of black mothers in thousands.”

“Moreover, I also appealed to Azerbaijani women and mothers, for which I was again criticized. Now, when there is a war, when our 18-20-year-old soldiers, servicemen, volunteers, officers and contract soldiers give their lives for the defense of the homeland, when the enemy wants a new “1915”, when our army is fighting at the same time with the armed forces of several countries, Against mercenaries and terrorists, I take up arms, form a women’s detachment, and also send a message to the whole world that an Armenian woman will stand equal to a man on the battlefield, but will not give up the homeland, will not allow the repetition of “1915”.”

“And what. Those same women are dissatisfied again. Even now they say that the Armenian woman has nothing to do on the battlefield. Dear ladies, please orient yourself. If you were not ready for war, you should have joined the peace campaign, not stoned it. If you did not like that campaign or you were indifferent to it, it means you were ready for war.”

“If you were ready, then now is the time when we must prove that the Armenian woman is no longer the weak creature who can be slaughtered in front of her child, starved to death in the desert, crucified, humiliated. From now on, the Armenian woman will possess the weapon and the Armenian man will equally defend himself, his child and his homeland. We have neither homeland nor dignity to give in to the enemy.”

“We owe our immortal heroic children a victorious and powerful homeland and it owes it to all of us. “

“PS As for the name of the detachment, we could only choose the name of one of the Armenian queens and we chose Queen Erato. But this does not mean that there can be no detachments with other proposed names. Women can form detachments and call them by their preferred name.”

In her Facebook post on 26-October Anna Hakobyan, the wife of Armenian Prime Minister Nikol Pashinyan wrote, “Beginning tomorrow, a detachment of 13 females, including myself, will begin military training exercises. In a few days we will depart to assist with the protection of our borders. Neither our homeland nor our dignity will be given up to the enemy.”

Then on 27-October 2020, she wrote, “After my post yesterday about forming a women’s detachment, we receive many letters from our compatriots wishing to volunteer for the detachment. Dear women and girls, who are ready to join us tomorrow, please call the following phone numbers: 098 310077 and 044 010551. My assistants will immediately present the next steps.”

Hakobyan had earlier urged the men of Armenia to join the military, saying, “Dear Armenian men, it’s time for you to rush to the military front and show the world what Armenian men are capable of doing to protect their homeland, homes, wives, children and parents.”

This is not the first time that Hakobyan will undertake combat training.

Just weeks after a major deadly escalation of tensions between the two neighbors in the southern Caucasus, Anna Hakobyan, 42, took part in the week-long military training camp that started on Aug. 25 and involved 15 Armenian women of various ages and professions, according to the story and photo published by Armenpress.

Seeking to instill military skills in the women, prepare them to defend their homeland and prevent the repeat of Armenian Genoide by Ottoman Turks in 1915, the training also included a demonstration on the usage and mechanisms of military equipment, including rifles, as well as a shooting test and a visit to the frontline with Azerbaijan.

Hakobyan, along with the other participants, also visited the head of Upper Karabakh.

It was under these circumstances that the armed military training took place as part of Hakobyan’s Women For Peace campaign.

As per Islamic belief, if a Muslim man dies in combat at the hands of a woman combatant, he loses his chance to get 72 virgins in the after life and straight goes to hell. It is this belief of Islamist Radicals fighting alongside Azerbaijan that they do not want to be killed at the hands of Women soldiers.

This was earlier taken by Kurdish and Yazidi women combatants when they formed women soldiers detachments to fight the Islamic State. The success of Kurdish Women soldiers in fight against Islamic State encouraged women in other conflict zones with Islamist Radical Terrorists and the States that such women soldiers units were formed. No Islamist Radical Terrorists who are fighting Jihad in the name of their religion want to die in combat at the hands of women combatants.

Armenian Women are setting another example to fight the Islamist Radical Turkey, Azerbaijan and the Islamic Terrorists brought in from Syria, Lebanon and Pakistan to send them to hell fire.

Why is the International Community silent when Turkey and Azerbaijan want to commit the Genocide of Armenians once again and rape the Armenian Women?

Are the business interests of European Nations and NATO members above the protection of Human Rights of Armenian men, women, children? Will the European Nations let Armenian Genocide to be repeated at the hands of Islamist Radical Terrorists brought in by Turkey and Azerbaijan?

Will Armenian Women form bigger Army detachments and platoons and send fear of hell fire among the Islamist Radical Terrorists?