Massive Exchange of Fire in Neelam Sector in Kashmir LoC : Did China Order Pakistan or Pakistan is rattled as China is Disengaging? 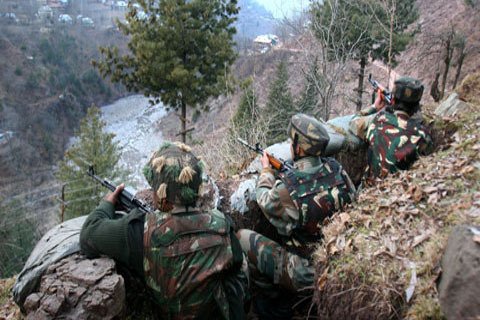 Troops of India and Pakistan Friday exchanged heavy fire and targeted each other’s positions on the Line of Control (LoC) dividing Kashmir, officials said. This present cease fire violations on Kashmir LoC a day after India and China decided to disengage at the Ladakh line of Actual Control (LAC).

It is learnt that China and Pakistan had been planning for a long time for a two-front war with India to take Indian Territories by force. Pakistan had been holding its side of bargain by holding Islamist Radical Terrorists for the occasion of Chinese assault on Indian side. However as the news of China and India agreeing to disengage on Ladakh LAC came, Pakistan is feeling betreyed and is pushing all the Islamist Radical Terrorists it had trained to Indian side under the cover of massive fire. Another reason of Pakistani impatience is that as the winters are approaching, all the routes to infiltration will be covered with heavy snow. Hence Pakistan has no time but to push the Islamist Terrorists right now.

Going by the way Pakistan is operating it shouldn’t offend anyone when someone says globally proscribed terrorists like Maulana Masood Azhar and and Mullah Omar are nothing more than ununiformed auxiliaries of Pakistan Army.

Also tomorrow i.e. on 14-Novemeber 2020, India is celebrating its biggest festival of Diwali and Pakistan wants to create disturbance by unprovoked firing and cease fire violations at Kahsmir LoC and push as many terrorists to Indian side.

The two sides exchanged fire on the LoC in the Keran sector of frontier Kupwara district, about 130 km northwest of Srinagar city, the summer capital of Indian-controlled Kashmir.

An Indian army spokesman said their troops observed a suspicious movement of Terrorists and Pakistan Army along the LoC in the Keran sector, following which they foiled an infiltration bid.

“This was accompanied by initiation of an unprovoked cease-fire violation by Pakistan along the sector by firing mortars and other weapons,” the spokesman said. “Befitting response is being given.”

Reports pouring in from both the districts said the ongoing shelling has triggered panic among residents at both places and forced them to stay indoors.

As per Reyaz Ahmad Malik, Sub Divisional Megistrate (SDM) Baramulla district of Indian Jammu & Kashmir, three civilians on Indian side were killed & many injured in ceasefire violation by Pakistan along the Line of Control in the Uri sector.

During the past three days, cease-fire violations were reported on the LoC in the Poonch sector also.

Last Sunday an officer of the Indian army, three troopers, including a border guard, and three militants were killed in a fierce gunfight along the LoC in the Machil sector of Kupwara.

Reports said since the beginning of this year, over 3,000 cease-fire violations have been recorded.

The troops of India and Pakistan intermittently exchange fire on the LoC and the International Border (IB) in Kashmir, despite an agreement in 2003 to observe a cease-fire. Although the cease-fire remains in effect, New Delhi and Islamabad have accused each other of resorting to unprovoked firings and violating cease-fire agreements. And both sides maintain their troops gave a befitting reply to the other.

The LoC is a de facto border that divides Kashmir into India and Pakistan controlled parts.