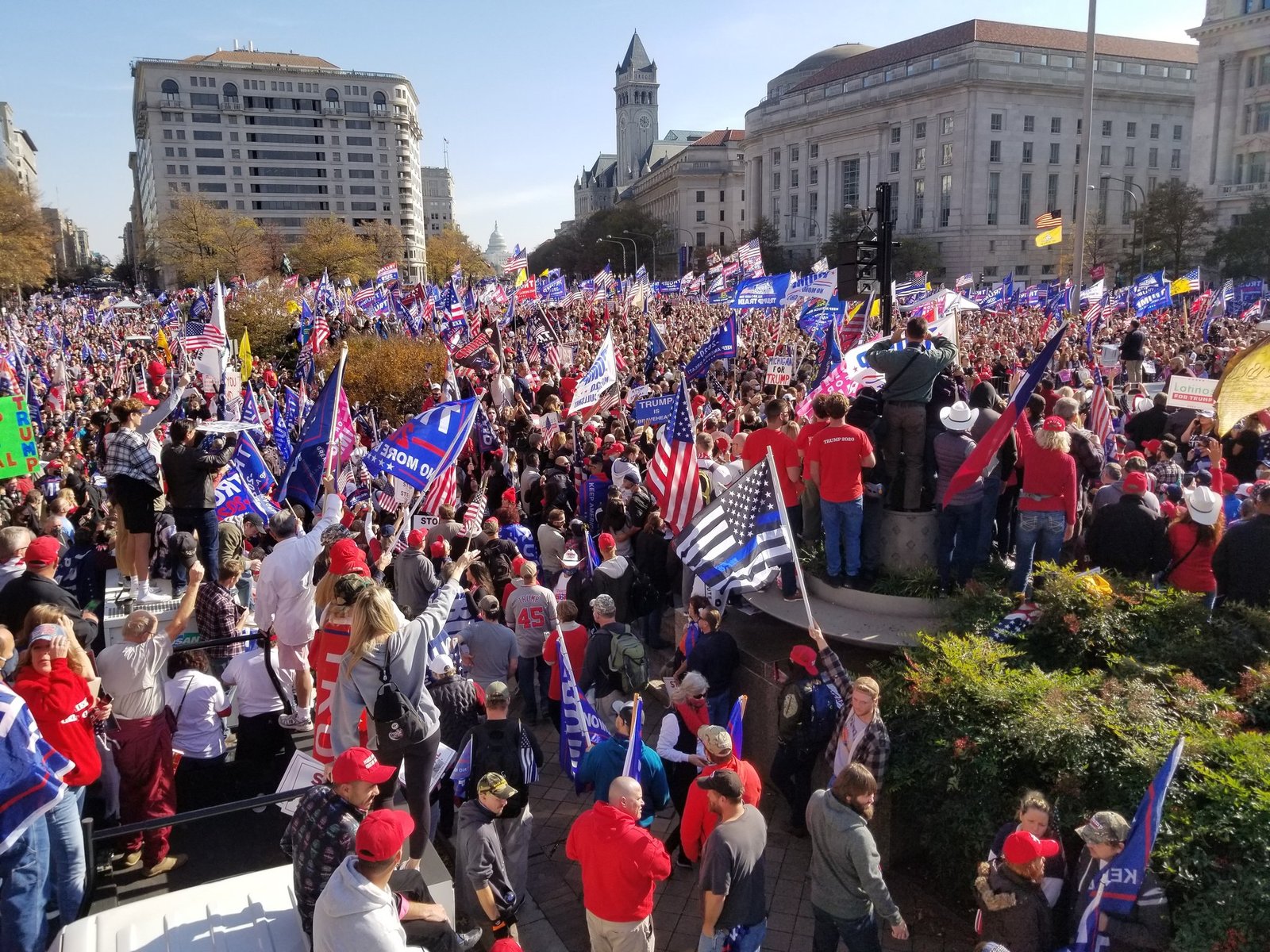 Thousands of Trump supporters gather in Washington DC march towards Supreme Court to protest against Election Frauds. Chanting “stop the steal” and carrying “Trump 2020” flags, supporters of President Donald Trump convened in Washington, D.C., Saturday then stepped off a march to the Supreme Court in protest election results they say are fraudulent.

Speakers asserted, that there was fraud in the 2020 election. However the Leftist/Liberal Main Stream Media (MSM) is not ready to cover the Republican side of story on US Election Frauds. As more truth is being uncovered about Dominion Voting Systems‘ computer “glitch” in the voting machines flipping votes during the 2020 US Elections, uncovering of more information about a bankrupt foreign company Scytl based in Spain to provide various election services — including online voting, links of several Democrats with the people working with these companies, past historical election frauds by these companies, Chinese involvement in US elections, dead voter registrations, MSM or Fake News Media is still not ready to accept these as Election Frauds.

As everyone knows, Fake News Media (As President Trump calls MSM) is busy running its propaganda to defeat President Trump. In that process the truth that is emerging is ruthlessly suppressed and the same dialogue is repeated, that there is no evidence of Election fraud.

Thousands of Trump supporters carrying flags and wearing red Make America Great Again (MAGA) hats and shirts arrived early to pretest against the US Election frauds and a sea of cheering people had gathered on Freedom Plaza by the time the event kicked off at noon.

Closer to the stage, people listened to speakers talking about fraud in the election and promising to fight for President Trump.

Conservative activist Scott Presler said the crowd had Trump’s back.

Before speakers took the stage, the presidential motorcade emerged to drive a lap around the gathering crowd. President Trump called the rally “heartwarming.”

Women for America First, which obtained a permit for its demonstration, said there will be music, dancing and speakers at the rally.

About a dozen pro-Trump groups, including Million MAGA March and Stop the Steal DC, planned to rally.

“I saw this thing and it was like ‘save the vote,’ ‘protect the vote’ and I just want to show my support for it. It’s important that we protect democracy,” one attendee said.

A so-called computer “glitch” in the voting machines flipping votes during the 2020 US Elections has caused a major controversy. A so-called computer ‘glitch’ in one of Michigan’s counties has led to 6,000 votes switching from President Trump to Joe Biden. It was revealed in Georgia that the “glitch” was caused not by hackers but by the vendor itself uploading a piece of software at the last minute.

As reported by Politico:

A technology glitch that halted voting in two Georgia counties on Tuesday morning was caused by a vendor uploading an update to their election machines the night before, a county election supervisor said.

Voters were unable to cast machine ballots for a couple of hours in Morgan and Spalding counties after the electronic devices crashed, state officials said. In response to the delays, Superior Court Judge W. Fletcher Sams extended voting until 11 p.m.

The machines belonged to a company called Dominion Voting Systems. Dominion Software is used in 47 US states including all of the battleground states or swing states. This has forced the Head of the Republican Party demanding an additional 47 counties be recounted after the fix since these 47 counties also use the same Dominion software.

In 2014, Dominion Voting committed to providing emerging and post-conflict democracies with access to voting technology through its philanthropic support to the DELIAN Project, as many emerging democracies suffer from post-electoral violence due to the delay in the publishing of election results. Over the next three years, Dominion Voting will support election technology pilots with donated Automated Voting Machines (AVM), providing an improved electoral process, and therefore safer elections.

Further, in 2015 Washington Post reported that Dominion Voting Systems donated between $25,001 and $50,000 to the Clinton Foundation.

There are also allegations that Dominion Voting Systems was involved in some sort of voter fraud because they had worked with persons connected to high-ranking Democrats, such as House Speaker Nancy Pelosi.

GreatGameIndia has found involvement of another dubious foreign company in US Election meddling. The votes cast by Americans were counted by a bankrupted Spanish company Scytl in Spain. Like Dominion Voting Systems, Scytl has a long history of election fraud in various nations including injecting backdoors in its election software. The issue has prompted experts to question why the sensitive job of counting votes was outsourced to a foreign company? How could a bankrupted Spanish company count American votes in Spain? Due to such widespread fraud, the Chairman of the US Federal Election Commission Trey Trainor believes that the 2020 US Presidential Elections is illegitimate.

Scytl involvement in 2020 US Election

Many American states commissioned a foreign company based in Spain to provide various election services — including online voting — in the 2020 presidential election. Scytl, a Spanish company headquartered in Barcelona offering a suite of election services, has been used by various states and cities in several ways since 2008.

Scytel’s website shares an overview of election services it provides to governmental clients in U.S.:

Scytl has successfully delivered election modernization projects in the US since 2008, and most recently for the 2018 Midterm Elections, when over 70M voters from more than 900 U.S. counties successfully leveraged Scytl’s technology. Also, during 2016 US Presidential Election Scytl’s technology provided over 53 million registered voters and thousands of election staff across 28 states the benefits of more efficient, scalable and accessible election processes, consolidating Scytl as the leading election modernization provider in the United States.

Scytl was declared Bankrupt in June 2020

What is interesting is that the Spanish firm Scytl was declared bankrupt in June this year. The company filed for bankruptcy as part of a broader analysis of security vulnerabilities associated with digital voting.

The US government, once they determined that this Dominion server was involved in switching votes, then the intelligence community began a search for the server and discovered that the server was in Germany.

In order to get access to that server and have it available for use in a legal manner they had to have the State Department work in tandem with the Department of Justice. They had to request that the government of Germany cooperate in allowing this seizure of this server.

The CIA was completely excluded from this operation.

The appropriate documents required to affect that kind of seizure were put in place, signed off on, and there was also U.S. military support.

There are a lot of reports also coming to light regarding Chinese involvement in US elections.