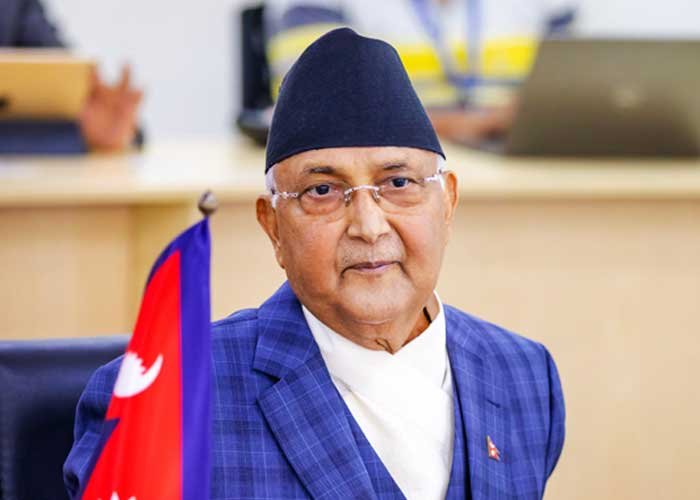 Political unrest in Nepal after the dissolution of the parliament in deepens. The caretaker Prime Minister KP Sharma Oli was removed from ruling Nepal Communist Party by a Central Committee Meeting of the splinter group of the party on Sunday 24-January 2021.

“His membership has been revoked,” a spokesperson for the splinter group, Narayan Kaji Shrestha, told news agency ANI.

Rival faction of the Communist Party had earlier threatened to expel Oli from the party when they had taken to streets against his decision to dissolve the parliament and order a fresh election.

“We ousted Oli from the post of Chairman of ruling NCP. Now, we will take disciplinary actions against him as he is not fit to remain a member of the Communist Party and we have ordered him to provide clarifications. He has not replied to us till date,” Madhav Kumar Nepal, a leader of the rival faction of NCP, had said.

He said that an order for “clarification” has been sent to Oli for the parliament dissolution. However, the caretaker PM had not responded to it.

Madhav Kumar had also ruled out any possibilities of unification with Oli even after he acknowledges his mistakes and corrects his latest move.

“No one should be under the impression that the NCP would bow down to KP Oli. It will never happen as we do politics on the basis of value and beliefs,” he remarked.

The parliament was dissolved on 20 December 2020 at the direction of the Prime Minister Oli and new elections were announced for April 30 and May 10.

Tensions, however, have grown between Oli and the leader of the former rebels, Pushpa Kamal Dahal, who is also co-chair of the party. The two had previously agreed that they would split the five-year prime minister’s term between them, but Oli has refused to allow Dahal to take over.

The opposition has also accused Oli’s government of corruption, and his administration has faced criticism over its handling of the coronavirus outbreak.

Oli also has been accused of moving closer to China and drifting away from Nepal’s traditional partner, India, since taking power. The ruling Communist Party of Nepal lead by K P Oli which has supported China and has got good relationship with China, has been unpopular lately because it is embroiled in infighting and corruption and has failed to control the COVID-19 pandemic. The Ministry of Home Affairs in Nepal, meanwhile, had issued directives to 77 districts to quell the current spate of protests, through force if needed.

Oli’s close relationship with Communist China has lead to the rise of massive protests by majority of Nepalese population against the rulling Communist Party of Nepal that has to face massive cricism for Oli’s actions.

Demonstration and Protests Against Communist Government were held in Nepal’s capital Kathmandu, demanding restoration of monarchy in the country. Similar to Thailand, people in Nepal want their Hindu Monarchy back and the support base for Nepal’s Communist Party is drifting away due to acts of Oli.

The massive rally on Saturday 5-December 2020 witnessed public chanting slogans in favor of the Hindu monarchy and the demand for reinstatement of constitutional monarchy in the Himalayan Nation.

The participants of Saturday 5-December 2020 massive rally Opposing Prime Minister KP Sharma Oli’s China supported Communist government, chanted slogans in favor of the Hindu monarchy and demanded the reinstatement of constitutional monarchy in the Himalayan Nation which they claimed was for the sake of country’s national unity and well-being of the people.

Many people we discussed said that it is because of the Communist Government in Nepal which is funded and financed by Communist Party of China and acting as a puppet of the Chinese Communists, is trying the diversion tactics. On the one hand Communist Nepalese Govt is gifting entire Mt. Everest to China, while on the other hand blowing things out of proportion for a track of 40 Square Kilometres.

If you remember Nepalese Communist Government lead by Oli objected to India laying a road connecting the Lipulekh pass in Uttarakhand, India at the behest of China and raised a fictitious Disputes over a 40 KM land with India. Communist Nepal Parliament recently approved a new map at behest of China, that includes parts of India. It was raised to hype pubic opinion against India and divert public anger to India instead of China. We covered it in details in our previous article Nepal Surrenders Mt Everest to China And Disputes 40 KM Land With India

As per people, the Only Hindu Kingdom is slowly becoming a communist and Islamist Radicals are also slowly spreading their tentacles all over Nepal. The ancient Hindu Kingdom that had the Ancient Pashupatinath Temple at the core of Relations between India and Nepal, the Communists are killing all the Hindu ideologies that depended on faith and Ancient Hindu culture.