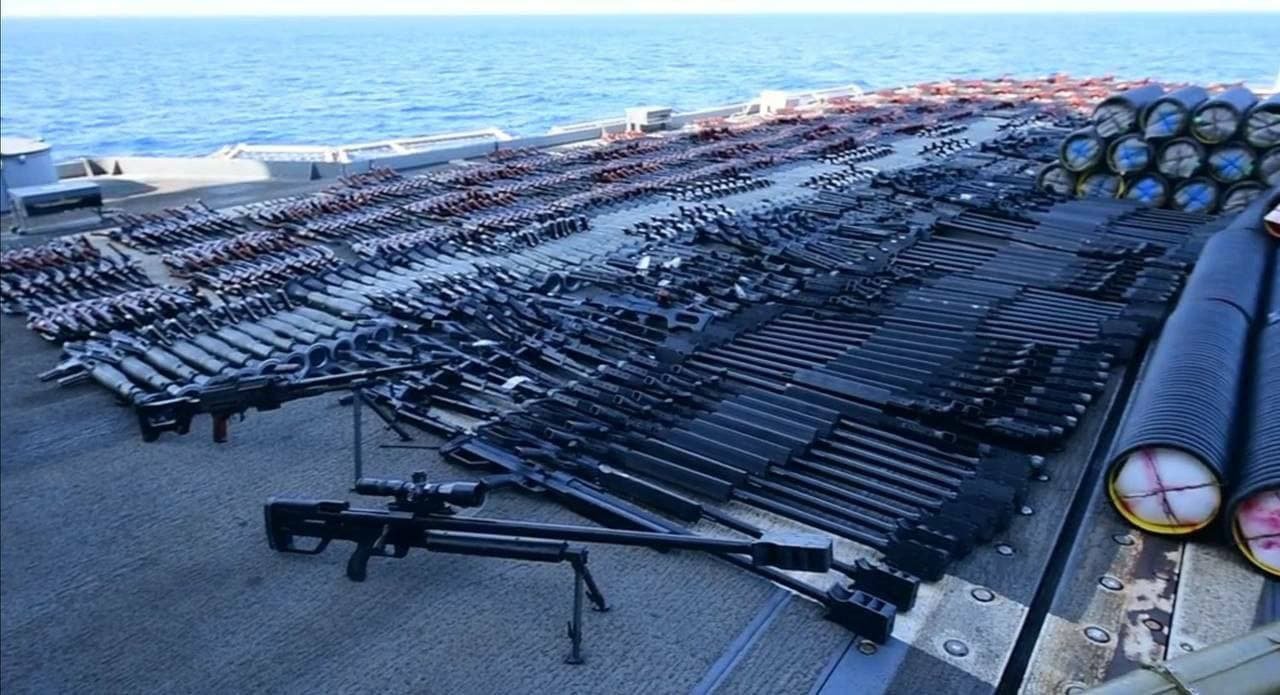 A large shipment of Chinese arms was seized by The US Navy’s Fifth Fleet in Arabian Sea headed for Houthi Terrorists in Yemen. The US Navy’s Fifth Fleet announced on Sunday 9-May 2021 that it seized an arms shipment hidden aboard a vessel in the Arabian Sea. The cache of weapons is the latest such interdiction by sailors amid the long-running war in Yemen. With this huge cache of arms and ammunition, China becomes one of the largest arms suppliers to terrorists in Yemen also.

The interception was made in the north Arabian Sea after the vessel was spotted by an SH-60 Seahawk helicopter flying from the USS Monterey. The raid took place between May 6 and 7.

“After all illicit cargo was removed, the dhow was assessed for seaworthiness, and after questioning, its crew was provided food and water before being released,” the Fleet said.

The navy isn’t yet sure of where the fleet carrying Chinese-made arms originated from. Weapons included Kalashnikov-style assault rifles, sniper rifles, heavy machine guns and rocket-propelled grenade launchers. Over the years, small arms have been smuggled into poorly controlled ports to conflict-ridden Yemen, where Iranian-backed Houthi rebels have been battling a Saudi-led military coalition since 2015.

Yemen is awash with small arms that have been smuggled into poorly controlled ports over years of conflict.

This also raises a big question on large number of Chinese fishing vessels in all the seas all over the world and whether they are just stealing ships worldwide or are also being used for smuggling of Arms and Ammunitions or drugs around the world?

Related Article China Was Preparing For WW3 With Biological Weapons For Last Six Years : US Investigators

Just imagine if this huge Cache of Arms could have reached terrorists in Yeman, what it would have meant for the security of Saudi Arabia. Saudi Arabia’s security is being handled by former Pakistan Army General Raheel Sharif, “who is leading Pakistani Mercenaries fighting for Saudi Army”. He is from the same Pakistan that is a blood brother of Turkey and has sent its terrorists to fight in Syria, Lebanon, Azerbaijan, Yemen and other countries at the command of Turkey. Recently Pakistani mercenaries guarding Saudi Arabia surrendered in large numbers to Houthi rebels, instead of fighting them to protect Saudi for which Pakistani mercenaries force was hired.

In January 2021, the United States designated the Houthis a terrorist organization, creating fears of an aid shortage in Yemen, but this stance was reversed a month later after Joe Biden became President.

US President Joe Biden’s administration said on Friday 5-January 2021 that it was planning to remove Yemen’s Houthi rebel group from the terrorist blacklist.

The decision is the most recent in a series of policy reversals from the Trump era and comes less than three weeks after the designation was ordered.

“Our action is due entirely to the humanitarian consequences of this last-minute designation from the prior administration, which the United Nations and humanitarian organizations have since made clear would accelerate the world’s worst humanitarian crisis,” a State Department official said.

US President Joe Biden’s announcement to stop supporting military intervention and its intention to reverse the Trump administration’s decision to designate Houthi rebels a terror group may not end the conflict in Yemen, but it has signaled a marked shift from backing the interests of Saudi Arabia.

“The Biden administration is signaling that the US is actually now going to have a policy that is focused on Yemen,” said Scott Paul, Oxfam America’s policy advocacy director.

But skeptics believe the plan may not work.

Quoting Dave Harden, a former US official, who led a human development team for Yemen, the Washington Centre for Yemen Studies (WCYS), a US-based think tank in its initial assessment said the move may actually help rebel Houthis to expand and consolidate power.

The WCYS assessment said the US policy essentially means ending support to the Arab coalition to fight the Iran-backed Houthis. But also continuing the fight against America-threatening terrorists — like Al Qaeda and the Daesh/ISIS.

The center, however, added that the policy left ambiguity on the practical elements of supporting Saudi Arabia’s defense.

Isn’t this incident raising a big question on large number of Chinese fishing vessels in all the seas all over the world and whether they are just stealing ships worldwide or are also being used for smuggling of Arms and Ammunitions or drugs around the world?