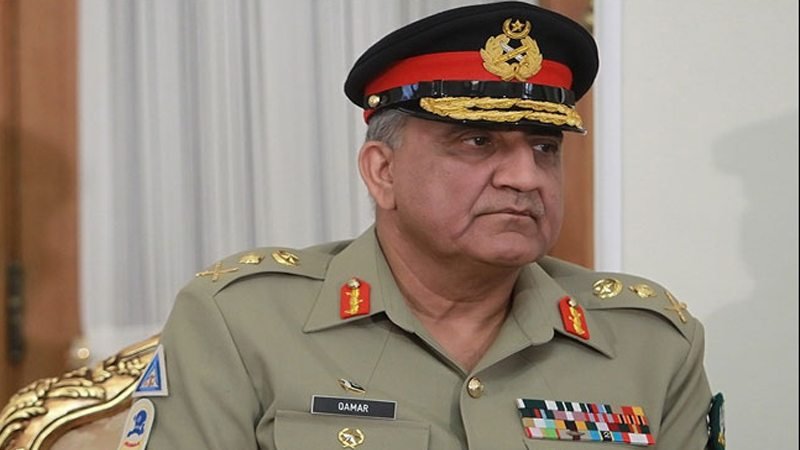 Failed Pakistan continues to be in news. This time for another failed coup attempt within Pakistan Army ranks that was foiled. Actually, a conspiracy was hatched to assassinate Pakistan’s Army chief General Qamar Javed Bajwa, however it was averted in time.

Revelations were made by Turbat (Balochistan) based Ex-Pakistan Army Officer of Pakistan Army and Sindhi political activists via a thread of tweets from his twitter handle @__SindhuDesh2 on June 21. The same was corroborated by another media activist from Pakistan Occupied Kashmir (POK) Amjad Ayub Mirza. The same was also aired of India’s largest News Network Zee news.

In a series of tweets, Sindhi Ex-Pakistan Army Officer revealed that the Plan was to eliminate Pakistan Army General Bajwa during his visit & inspection of arms cache of 10th core Armory at Line of Control (LoC) with India. Pakistan’s SSG commandos were tasked to carry out the operation. In addition to Bajwa, Adjutant General Amir (Head of SIB) & Maj General Md. Imtiaz Khan were also on the list.

Plan was hatched by those Generals who were forcibly retired recently. Following officers were arrested:-

The plan was hatched by General who was forcibly retired and all their perks including plot/pension etc were held back.

Here are the screenshots of the tweet thread of Ex-Pakistan Army officer :-

In June 2020 also as part of a coup, lt. Gen Abdullah Dogar, Lt Gen Ijaz Chaudhry, Gen Bilal Akbar along with 60 officers of various units were dismissed from service for being member of a “secret” WhatsApp group. Use of smart phone was banned inside Pakistan army installation.”

Maj Gen Manzoor Ahmed who was recently dismissed from service & has challenged his dismissal in Islamabad/Lahore High court is not part of the conspiracy, however few out of 1700 recently dismissed officers/soldiers were indeed part of it.

All arrested personals are kept at Attock fort. Due to torture, 4 officers are reported to be in serious condition.

It is believed that had Bajwa been assassinated, the situation in Pakistan could have worsened. Since the revelation of this conspiracy, there has been a stir in Pakistan.

He said in a video uploaded on his YouTube channel that the intelligence clandestine network of Radio Himalaya gathers intelligence there while living in Pakistan-occupied Kashmir. He also shared the similar informaiton of Another coup attempt within pakistan army via its intelligence sources that Bajwa was to be attacked, but before that the officers and armymen who were tasked to assasinate Bajwa were arrested. Mirza also said that 14 officers of the Pakistani Army, 22 SSG commandos and 30 soldiers have been arrested at 10 pm on Saturday night. He said that the Investigation Branch of the Pakistan Army has arrested these people.

What was the conspiracy?

According to Mirza, the plan of these officers was that when General Bajwa visits those areas of PoK, where intelligence weapons have been kept to attack India, only then he will be assassinated. As per the plan, the SSG commandos will surround Bajwa and then fire him with bullets. Mirza also told that the conspiracy to assassinate Bajwa was hatched by the forcibly retired soldier and his friends. These people are angry with Bajwa, because 1700 soldiers have been removed from the army. His pension has also been canceled and the land given to him has also been taken back from them.

The activists of POK told that the people who have been arrested. It includes 14 officers. Four of these 14 officers are majors, out of which two are related to Military Intelligence and two are related to ISI. At the same time, there are three lieutenant colonels, one of them belongs to the Central Commander, one to the Corps of Engineers and one to the 17 Division. He told that there are two full colonels, one of which is related to the Directorate of Military Operations and the other is related to the Weapon and Equipment Directorate. Apart from this, two Brigadiers have also been arrested. Along with this, four Major Generals have also been taken into custody.

Isn’t Pakistan that is the terrorist producing factory of the world and is responsible for exporting terrorists not only in India and Afghanistan besides the whole world, more volatile than Iran or North Korea?

What would happen if the Rouge people take over Pakistan or its nuclear arsenals falls in the hands of terrorists or the supporters of terrorism? Wouldn’t it be a threat for the world more dangerous than Iran or North Korea?

Shouldn’t attempts be made to denuclearize failed and bankrupt Pakistan that may arm twist the world in future if its attempts to begging fail?