Attacks on Pakistan Rangers in Ghotki And Larkana in Sindhudesh: SRA 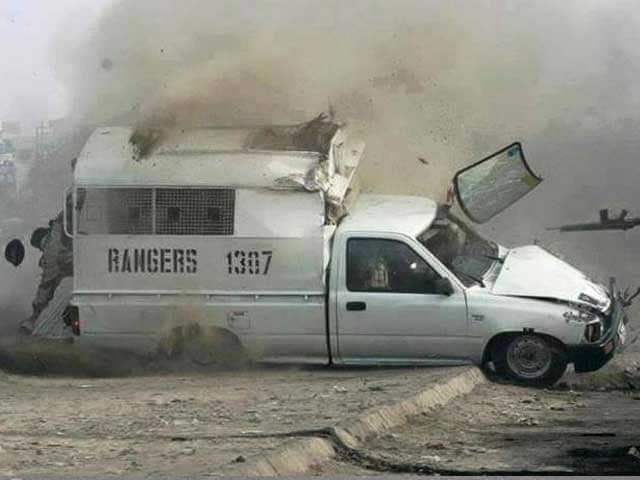 Two personnel of Pakistan Rangers, an elite paramilitary security force, and one civilian lost their lives when a blast took place near a security forces vehicle in Sindh’s Ghotki. A bomb disposal in-charge has been killed and two others injured in an attack on a Ghotki bomb disposal vehicle.

Two Rangers personnel were killed and two others were injured in an attack on a Rangers vehicle parked at Liaquatabad camp in Karachi.

The second attack came hours later in the port city of Karachi when a grenade was hurled at a line of people waiting outside a government welfare office, killing one and injuring eight others, according to a statement from municipal authorities.

Sindhudesh Freedom Fighters organization, Sindhudesh Revolutionary Army, which wants the province to break from the Pakistani federation, claimed the responsibility of twin attacks.

Pakistan has occupied Sindhudesh since last 72 years and their Security forces have been committing genocide of Sindhis and Mohajirs since decades. Thousands of Mohajirs and Sindhis have been disappeared and either sold for Organ Harvesting or killed. Pakistan even want to drive Sindhudesh dry by blocking the flow of Indus River in Sindhudesh by building the dam in Gilgit-Baltistan. We covered about this in our previous article Punjab Blocks Sindh’s Water, Sindh Blocks Ports for Punjab: Sindhudesh Freedom Fighters.

In the recent years, operations by security agencies against armed the Mohajirs and Sindhis have intensified in the Occupied Sindhudesh.

The operations were coupled with a series of large-scale military offensives targeting the freedom fighters.

Freedom Fighter groups have the ability to launch periodic attacks in any part of Sindhudesh and Balochistan at will.

The rural regions are the most neglected and home to some of Pakistan’s most impoverished areas of effectively indentured laborers, who have little in the way of access to education, healthcare, or upward social mobility. Above that Pakistan Rangers regularly keep abducting Mohajirs and Sindhis from these areas for Organ Harvesting or killing them for political reasons.

Read about Previous such attacks by Sindhudesh Freedom Fighters this month

Pakistan has for 72 years needled India. Pakistan has accused India of Islamophobia, but the same Pakistan is the biggest killer of Muslims in the entire world. Over a Million Baloch, Mohajir, Sindhis, Pashtun, Ahamadiya, Shia Muslims have been enforced disappeared either for Organ Harvesting or killed. Would the International Community take cognizance of the Human Rights Abuses by Pakistsan?