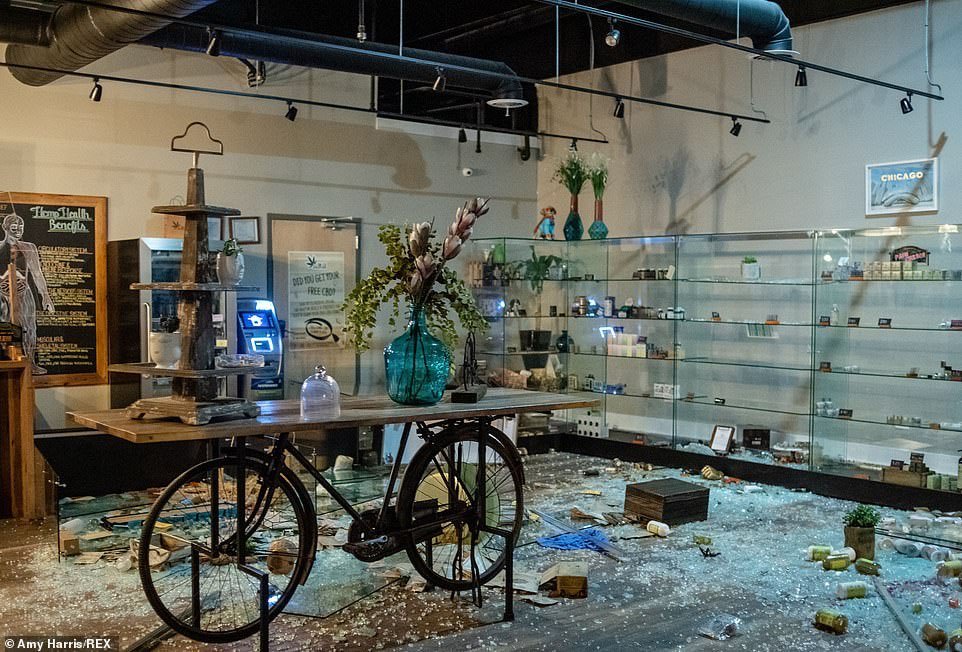 In the Name of Black Lives Matter, looting, rioting continues in Chicago. Black Lives Matter is Involved in Spreading Rumors to Mobilize Violent Mobs. Over a dozen Police Officers were injured. 3 Chicago cops were shot outside police station during arrest.

Looting and Riots in Chicago

Some 100 people were detained and more than a dozen police officers were injured during overnight looting and rioting in the US city of Chicago, Police Superintendent David Brown told reporters on Monday.

“I want to emphasize that we made 100 arrests of looters… along with several officers being injured, several officers being shot at,” Brown said. “A total of 13 officers were injured throughout the night, including a sergeant who was struck with a bottle. Widespread looting and rioting erupted in the US city of Chicago after midnight on Monday following a police-involved shooting a day earlier that left a young man wounded.

In our previous article Can A Sane Person think of “Defund The Police”? Look at Crime Data we did a data analysis of crime data from City of Chicago and New York.

Brown said the violence erupted as a result of “misinformation” about Sunday’s incident. The unrest began on Sunday after police shot a suspect who had opened fire on officers while trying to escape arrest, Brown said. He noted that the young man was taken to the University of Chicago hospital and is expected to survive.

Police became aware that several social media accounts were encouraging looting downtown, Brown said. He added that 400 officers were dispatched to the downtown area to respond to the threat. Brown pointed out that in the last seven days nine police officers had been shot at in the city of Chicago. “What we are seeing is violence against police,” Brown said.

Many social media handles have been fueling riots by spreading fake information and spreading rumors that mobilize violent mobs. The following tweet is an example of instigating violence. This tweet was deleted hours after the riot and looting already happened. Disinformation is being used everyday to fuel left-wing race riots and violence.

Mass rioting and looting overnight in Chicago is linked to BLM. BLM Chicago endorsed the riots based on the lie that CPD killed a black child. That narrative was used to mobilize mobs on the streets. In a tweet BLMChicago twitter ID @BLMChi tweeted, “If your rules include you shooting our youth, you can’t expect people to play by your rules #ChicagoProtests”

Recommended Article : Riots In US & India Are Attacks On The Oldest & The Largest Democracies

Brown said that he has instructed detective units to create a special team of investigators to examine security footage, adding that they have a high definition video of suspects and vehicles. He said police would maintain a heavy presence in the city until further notice, adding that officers would be working 12-hour shifts with no days off until order is restored. Local television stations and social media users posted video of hundreds of rioters looting and destroying dozens of local stores in downtown Chicago including Gucci, Louis Vuitton, Nordstrom, Macy’s and Best Buy.

Is the FBI keeping a tab on all the Handles that are spreading rumors and misinformation in the United States that mobilize violent mobs and then damage to public property and loot businesses? Or is something seriously wrong with the agencies? Will the red tapism and the games of jurisdiction prevent the Federal agencies to let the criminals go scot-free only because the state police does not have enough resources or is too busy to take action against the fake rumor mongers?

United States which is known to have the best surveillance system, by not catching hold of these rumor mongers and handles that incite violent mobs and taking action against them and publicizing such arrests is giving a free hand to the Leftists and foreign forces including China and George Soros to take down the US.