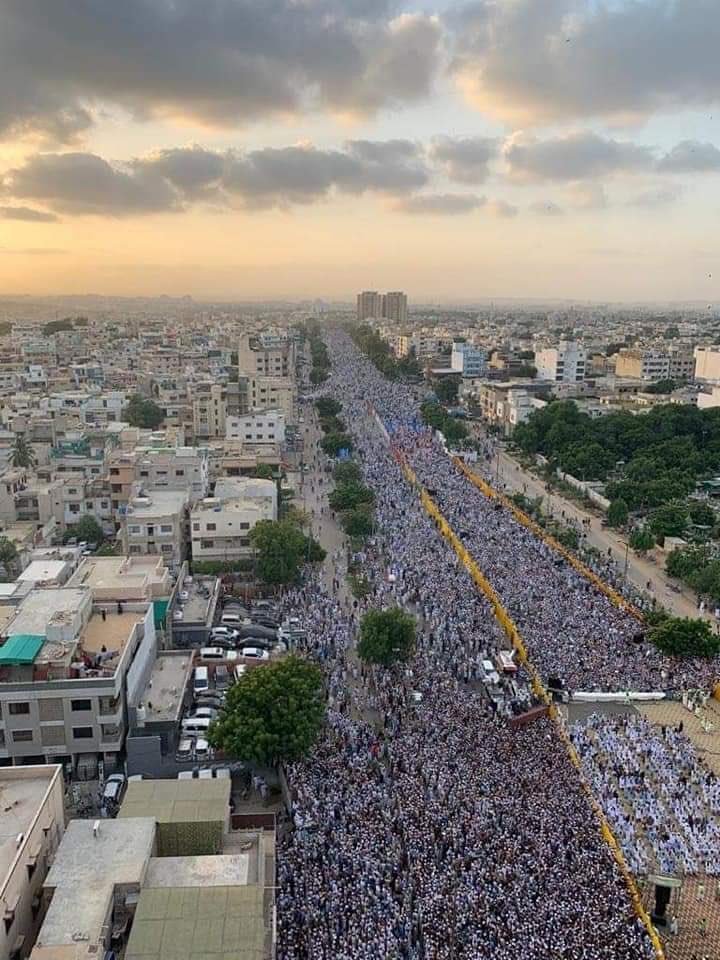 On 11-September 2020, the death anniversary of Quaid-e-Azam Muhammad Ali Jinnah, who was also a Shia, a huge anti-Shia rally was held by banned Sunni Terrorist outfit Sipah-e-Sahaba (Pakistan renamed to Millat-e-Islamia and now known as Ahle Sunnat Wal Jamaat) (ASWJ), who are mainly responsible for violence against Shias. They attacked Imam Bargah and chanted Shia Kafir. Pakistan Intelligence Agency ISI is behind Anti-Shia rallies in Karachi.

As per the censored version of Pakistan media (media in Pakistan is under the control of DG ISPR under the new PEMRA law) that is known to spread disinformation and do the cleanup afterwords, the protest came in the wake of some major Shia leaders in the country who allegedly made disparaging remarks against Islam in a televised broadcast of an Ashura procession last month. Why were they silent whole month and why suddenly these rallies now? You can read the story propagated by ANI here.

Three Anti-Shia rallies in three days in Karachi have sparked fears that it could lead to a fresh round of sectarian violence in Pakistan.

11-September 2020 – First Anti-Shia rally was organized by the proscribed groups with support of Jamiat Ulema-e Islam (F) on the . JUIF is a Sunni Deobandi political party in Pakistan

12-September 2020 – Second by Brelvis, Tehreek-e-Labbaik Pakistan (TLP) including Mufti Muneeb. TLP was founded by a Sunni Radical Islamist Khadim Hussain Rizvi in 2015 to oppose any changes in Blasphemy Laws.

There are several reasons why these Anti-Shia Rallies were organized in Karachi and not in Islamabad or Lahore.

Death Anniversary of Quaid-e-Azam Muhammad Ali Jinnah, who was also a Shia

This was exposed by Leader of Mohajirs and Sindhis Altaf Hussain in his tweet. His tweet in Urdu when translated read, “In Pakistan, programs are presented on TV on the birthdays and anniversaries of important personalities, but on September 11, the death anniversary of Quaid-e-Azam was not celebrated at the official level, nor was any program aired on radio or TV. Pakistani people! A country whose founder is forgotten till the day of death, will such a country be called Pakistan or non-Pakistan?”

Quaid-e-Azam Muhammad Ali Jinnah who founded Pakistan after partiton with India on 14-15 August 1947, that displaced fifteen million people and killed more than over 2 million people in the blood bath that ensured after the partiton of India in those months. He was also a Shia. In every country events are planned months in advance to commemorate birth or death anniversaries of important leaders. However instead of celiberating the death annivarsary of Jinnah, mass Anti-Shia rally was organized. This cannot be done without the orders and support of Punjabi Pakistan Government, Punjabi Pakistan Army and Pakistan Intelligence Agency ISI.

During the partition of India and Pakistan, Muslims from Indian states of Uttar Pradesh and Bihar migrated and settled in Karachi. They were all Urdu speaking. However soon after, Punjabis took over the control in Pakistan. Pakistan tried to bring a demographic change by settling Punjabis in Sindh, particularly in Karachi. These Punjabis settled by Pakistan were Radical Islamists and would not want Sindhis or Mohajirs to Prosper. No reservations in Jobs are provided to Mohajirs despite after 73 years of its formation.

In our previous article Corrupt Pakistan Army Generals Fatten As Pakistan Starves : Who Is Pulling Their Strings? we exposed General Asim Bajwa

We have mentioned in several of our previous articles, how Journalists are disappeared or murdered just for speaking against Pakistan Army. Here General Bajwa is not an ordinary retired officer in Pakistan Army. He was the acting Chairman of the China-Pakistan Economic Corridor Authority (CPECA). In our previous article Chinese Debt Trap Diplomacy: Noose Around The Neck of Naya Pakistan?, we had mentioned that Pakistan has signed a new Ordinance establishing CPEC Authority. The ‘CPEC Authority Ordinance, 2019’ aims at the establishment of the supra-constitutional ‘China-Pakistan Economic Corridor Authority (CPECA)’. This new apex institution for the CPEC will be entrusted with not only far reaching autonomy but also vast financial and administrative powers. This authority would freelance the management of the predatory infrastructure and power-generation projects under his direct command. Since the Authority has come into existence, its chairman has been a retired lieutenant-general Asim Bajwa.

Over a hundred journalists have been disappeared and murdered by Pakistan Intelligence Agency ISI. Suddenly this expose of the Top Pakistan General who is the Chairman of the most powerful organization CPECA, whose authority cannot be challenged in any court of Law in Pakistan or even by Pakistan Prime Minister Imran Khan himself, exposed the rivalry between different factions in Pakistan Army and Pakistan Intelligence Agency ISI. It fuled distrust between the ruling Punjabi Pakistan Army and the public.

Things got worst when Prime Minister Imran Khan gave a clean chit to General Asim Bajwa. There was a wide spread criticism of Imran Khan Government and Pakistan Army throughout Pakistan. Rival factions in Pakistan Army are blood thirsty against each other to earn a larger pie from the remaining shambles of Pakistan.

Freedom call given by Freedom Fighters in Balochistan and Sindhudesh

Call for Freedom of Sindhudesh is given by the leader of masses Altaf Hussain who is considered the leader by Mohajirs as well as Sindhis. This unity of Sindhis and Mohajirs for the freedom of Sindhudesh was mind boggling and was driving the Punjabi Pakistan establishment crazy. Pakistan Intelligene Agency ISI and Punjabi Pakistan Government had to do something to create unrest so that people forget the freedom movement and fight among themselves in the name of Shia-Sunni. If there are riots in Pakistan occupied Sindhudesh, it will make Pakistan Army job easy as they can pump in more troops in the name of controlling riots and can crush the freedom movement.

Search for a quick solution to Pakistan’s woes

Given all the distrust amid Pakistan going bankrupt and the public asking questions, Pakistan Intelligence Agency tried its decades old solution to divert Public attention. Usually Pakistan Army and Pakistan Government start a clash with its neighboring India at the LoC (Line of Control) between India and Pakistan. However since Indian Army is already prepared for a 2 front war, Pakistan Intelligence thought it would be counter productive and a very costly affair if they poke India at this moment. Pakistan Intelligence Agencey ISI and Punjabi Pakistan Army knows if Pakistan tries to start a clash with India at a time when India is prepared for a 2 front war, it would clearly mean that Pakistan will be divided and new smaller countries will be formed viz Balochistan, Sindhudesh, Pashtunistan and India will not stop less than taking back Pakistan Occupied Kashmir (POK) and Indian Territories of Gilgit-Baltistan that Pakistan had forcefully occupied using tribal forces since 1948.

No solution in sight how to divert Public attention from the corruption of Punjabi Pakistan Army and recent expose of Pakistan General Asim Bajwa and the mass corruption in the name of CPEC projects that have rendered Pakistan bankrupt, Pakistan Intelligence Agency came up with its decades old strategy to throw Karachi into flames in the name of Shia-Sunni Riots.

Social media in the country was filled with posts, stunning photographs and videos of the the protest, in which a sea of protesters was seen chanting “Shias are Kaffir” (disbelievers) and holding banners of Sipah-e-Sahaba Pakistan, a terrorist organisation, linked to the killing of Shias over the years. The hashtag #ShiaGenocide soon began trending on Pakistani social media.

Afreen, an activist, said that several Shia Muslims have been attacked for reciting religious scriptures and partaking in Ashura commemorations since the beginning of Muharram

The activist said that Prime Minister Imran Khan should be held accountable as his government is supporting hate speech against Shia Muslims. She also said she was told that there was a demand to proscribe Ashura processions in Pakistan.

“Some years ago, Shias in Pakistan were receiving anonymous text messages that said ‘kill the Shia’. Terrorists hurled grenades where Ashura processions were taking place. The Shia in Kashmir and Kabul are also under siege and yet some still believe #ShiaGenocide is a myth, “Afreen said in another tweet.

She wrote, “I have been told that one demand was to proscribe Ashura processions in Pakistan. It should be made clear that Pakistan’s government has allowed known terrorists to spread their anti-Shia rhetoric far and wide. @ImranKhanPTI should be held accountable.”One twitter user wrote: “I am a #Shia living in Karachi. Yesterday, my city echoed with the chants of Kafir Kafir Shia Kafir. Few hrs later, state arrested #BilalFarooqi who is one of the rare journalists covering sectarian violence/orgs. If this is not step by step towards #ShiaGenocide then what it is?”

Another user posted on the microblogging site: “Sectarian terrorist outfit threatening Shia openly today after Friday prayers whereas those who condemn them are arrested. This is a legit proof of why Pakistan is complicit in #ShiaGenocide.”

Blasphemy is a sensitive issue in Pakistan, and people convicted are given death penalty for allegedly making insensitive remarks on Islam.

In the last few decades, sectarian violence has gripped Pakistan with Shia and Ahmadi believers being attacked and their shrines targetted.

Mullah regime in Iran, that is a Shia Country, is silent on the massive Anti-Shia rally in Karachi. Why? Because this rally was staged by Pakistan Intelligence Agency ISI and Pakistan Army.

Why did the protests start after one month of Moharram when some Shia leader allegedly made disparaging remarks against Islam in a televised broadcast of an Ashura procession last month? Because rallies and murders in Pakistan Occupied Sindh cannot happen without the will of Pakistan Intelligence Agency and Pakistan Army. They planned these to start on 11-September 2020, death anniversary of Jinnah, a Shia.

Why did the protests not spread to Islamabad or Lahore or other big cities in Pakistan? It was because Pakistan Intelligence Agency ISI and Pakistan Army want to crush Freedom movement for Sindhudesh.

Will these rallies and sloganeering lead to riots and start of a sectarian war between Shia and Sunnis in Karachi? Pakistan Army is looking for an opportunity to bring Martial Law in Sindh and they can go to any extent to take control.

Will the hatred shown against the Shia Muslims by Punjabi Pakistan in Sindh impact the overseas Pakistanis that would gather for rallies against India on every call given by the Pakistani Embassies or High Commissions?

Will Shia Muslims in India condemn Pakistan and understand the game played by Radical Islamist Pakistan that is following the policy to bleed India by 1000 cuts?