With An Eye On China, US to Deploy New Naval Fleet In Indian Ocean 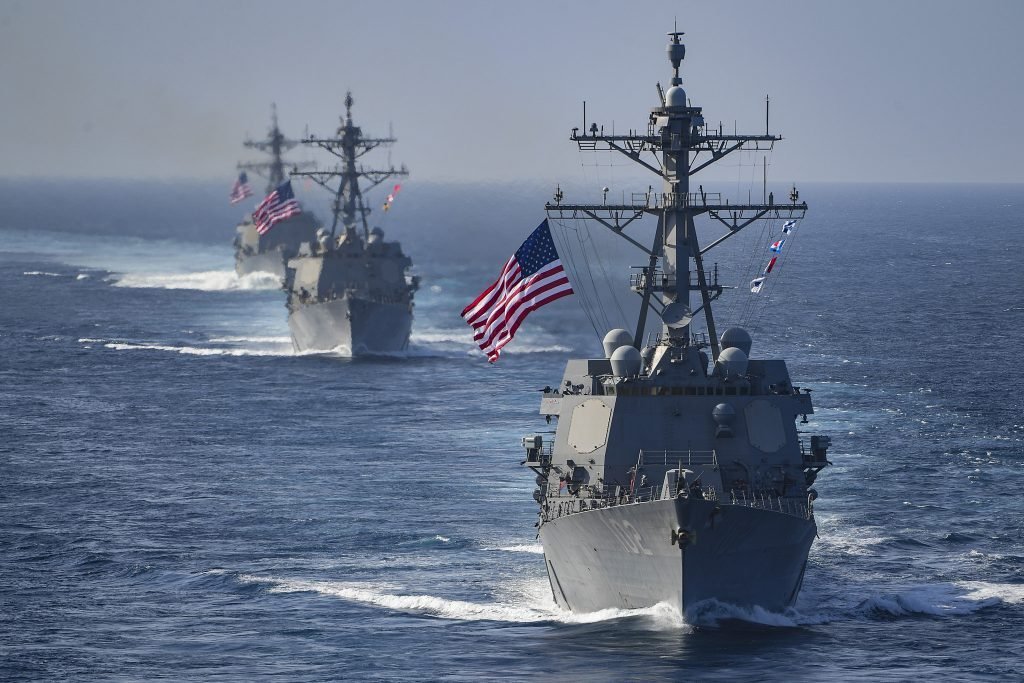 With an eye on China, US is to deploy a new numbered Naval Fleet in Indian Ocean. Navy Secretary Kenneth Braithwaite announced today he wants to establish a new fleet focused on the southwest Pacific and the Indian Ocean. That idea that will come as a surprise to the new Acting Defense Secretary, Christopher Miller, who hasn’t been told of the nascent plan.

A defense official confirmed that the idea for the First Fleet is Braithwaite’s, and he had previously discussed it with former Defense Secretary Mark Esper, who was fired by Trump last week. Esper was open to the idea, the official said.

It’s unclear how far along the planning is to actually stand up a new fleet, and Braithwaite acknowledged that his time in the Pentagon is coming to a close when the Biden administration is sworn in on Jan. 20. But he plans to use that time to sell his ideas. “Unfortunately, I don’t get a much longer stint in this seat,” he said, “but I got 60 days to go out now and really grasp the bully pulpit.”

It’s also not clear where the potential fleet might be based.

“We want to put that numbered fleet in the crossroads between the Indian and the Pacific oceans,” Braithwaite told a virtual audience attending a Naval Submarine League conference. “If we’re really gonna have an Indo-Pacom footprint, we can’t just rely on the Seventh Fleet in Japan. We have to look to our other allies and partners like Singapore, like India, and actually put a numbered fleet where it would be extremely relevant if — God forbid — we were ever to get in any kind of a dust up.”

The move would be a direct response to Chinese expansionism in the region and growing Chinese military might, which in many ways is centered around long-range missiles. The presumptive Biden Defense Secretary, Michele Flournoy, has expressed a willingness to meet that challenge head on.

As per Flournoy, “We have to have enough of an edge, that first and foremost we can deter China from attacking or endangering our vital interests and our allies. That means resolve.”

More specifically, last October Flournoy said one of the issues the Pentagon needs to weigh going forward is “what capabilities would US naval and air forces need to credibly threaten to sink 300 military vessels, submarines, and merchant ships within 72 hours? Such a capability would certainly pose a fundamental dilemma for any great power contemplating aggression.”

As per Mohan Malik, a Sinologist, editor of Maritime Security in the Indo-Pacific, the world is faced with triple crises—geopolitical power shifts, global health crisis and economic depression. China is the common factor underlying all three. These crises would collectively shape world politics, restructure global supply chains and bring an end to unregulated globalisation. The contours of the post-Wuhan world order are yet to take shape, but it is likely to be as divided and a bifurcated world as the post-World War II world was.

The Covid-19 has served to accelerate the breakdown of the post-World War II international order. We are entering Cold War 2.0 with eyes wide open, not sleep walking into it, as some would argue. The vast Indo-Pacific region from the Western Pacific to the Western Indian Ocean is now the “ground zero” of this new Cold War 2.0.

As for Beijing’s One Belt One Road (OBOR) megaproject, the pandemic-induced economic shock throws a huge spanner in the works as the world rethinks its economic dependence on China. Even before the pandemic, the Belt and Road projects had lost sheen. Chinese investments seemed to generate as much ill will as goodwill.

Some China-experts may write treatises justifying the rationale behind China’s predatory predilections, but Beijing is motivated by baser instincts: larger territory, absolute power, and obeisance from all. As China’s power has grown, Beijing’s visionhas evolved from a multipolar world to a bipolar one and then to a unipolar Sino-centric order underpinned by Chairman Xi Jinping’s imperial OBOR overreach. Beijing’s growing might has strengthened the hold of traditional notions of hegemony, territorial expansion, Han supremacy and tributary relationships.

Beijing’s strategic opportunism and attempts to shift the territorial status quo amidst a global pandemic all along its periphery have reinforced historic fears about the Middle Kingdom’s “insatiable lust for territory” and its image as a perennial “creeping aggressor”.

Historically, no country has spent so much for so long on its military and not gone to war. The Chinese military needs to test its new capabilities and war-fighting doctrines.

Xi seems in a rush to realise his “Chinese Dream” and lock in China’s geostrategic and geo-economic gains. Beijing’s aggressive posturing is aimed at subduing an ageing Japan, exposing limits to America’s declining power and diminishing India in the eyes of the world—as a prelude to establishing China’s global supremacy. Not surprisingly, Beijing’s attempts to establish a Sino-centric order are opposed by the Quadrilateral grouping of democracies (comprising the United States, Japan, India and Australia) and others whose interests lie in keeping the Indo-Pacific multipolar where Chinese power is balanced by continued US power and presence and those of other Asian states.

Western, Japanese and other multinational corporations will reduce their dependence on China to avoid the collateral damage. China’s mercantilism, its worldwide quest for resources, markets and bases,and attempts to carve out a Sino-sphere of influence will now face intense opposition from the United States, and its allies and partners.
Armed with the world’s largest naval fleet, China seems determined to become a resident power in the Indian Ocean and beyond. If India backs off or acquiesces in any confrontation with Beijing either in the Himalayas or in the Indian Ocean, the littoral states on its periphery will quietly slide into China’s orbit and a new Sinocentric order would emerge in the region.

With the growing presence of China in Indian Ocean, smaller countries like Sri Lanka, Maldives, Bangladesh and others under the Chinese debt trap diplomacy are likely to go within the sphere of influence of China. It is very essential that US marks its presence in the Indian Ocean region so that US allies like India in the region feel strong and can help fight Chinese imperialism.

In the event of war between China and India due to border issues, presence of US fleet in Indian Ocean can prevent China from launching any sea based attack on India.

Will the International community place any trade sanctions against Bio-Terrorist China for murdering over 1.33 million people world wide using its bio-weapon Chinese Coronavirus?

Will the Asian countries feel secured with the presence of US Naval fleet in Indian Ocean that they can standup against Chinese arm twisting to wrest strategic assets in smaller countries?

Will the security environment created by United States will also be followed by the economic security so that the smaller countries do not fall under the Chinese Debt Trap in future?

It needs to be considered, as more and more countries fall into Chinese debt trap diplomacy, the more votes China gets for its different resolutions at United Nations, more UN bodies will continue to be either headed by China, more power China gets to bring out any new resolutions that favor China.