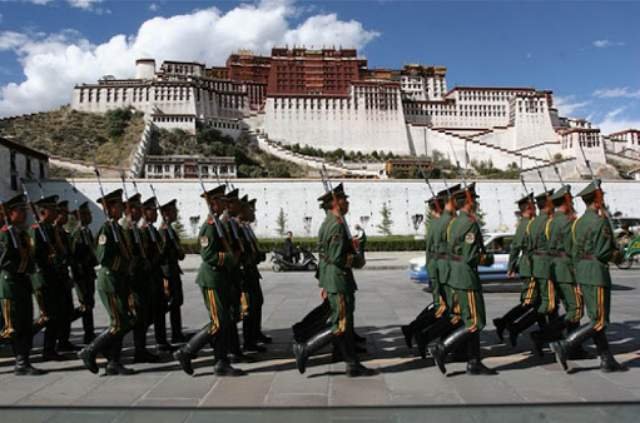 The United States State Department’s Office of Policy Planning released a 72-page report, titled “The Elements of the China Challenge,” for how the US has responded and should respond to China’s ongoing authoritarianism. Report mentions about Chinese Occupation of Tibet when it says, “CCP maintains a military occupation of Tibet that dates to the 1950s.”

The report devotes space to the discussion of repression of ethnic and religious minorities in China. Most notably, the document describes Tibet as militarily occupied land on page 42:

In gross violation of the principles set forth in the 1948 Universal Declaration of Human Rights, the CCP maintains a military occupation of Tibet that dates to the 1950s, conducts a brutal program in Xinjiang to “re-educate” Uyghurs and millions of other Turkic Muslims, oppresses ethnic Mongolians in China’s Inner Mongolian Autonomous Region, and imposes onerous regulations on China’s Christians, who number around 70 million.

Along with Tibetans, “The Elements of the China Challenge” discusses the repression of Tiananmen Square protesters, Uyghurs, and Christians. The report alludes to the effort of the Chinese Communist Party to sinicize non-Han Chinese peoples, as it states “As part of China’s national policy to forcibly integrate minorities, which is sometimes referred to as “stability maintenance,” the CCP has heightened repression of some 6 million Tibetans — severely restricting freedom of speech, religion, movement, association, and assembly.”

“Specific repressive measuresincludean elevated police presencewithin monasteries; ideologicalre-education of Tibetan Buddhist monks and nuns; arbitrary detention and prosecution of Tibetans; tight surveillance and censorship; and increased restrictions on the use of the Tibetan language in schools.”

As per the report, “Awareness has been growing in the United States — and in nations around the world — that the Chinese Communist Party (CCP) has triggered a new era of great-power competition. Yet few discern the pattern in China’s inroads within every region of the world, much less the specific form of dominance to which the party aspires.”

Related Article Bill to recognize Tibet as an Independent Country Introduced: US Congress

“The CCP aims not merely at preeminence within the established world order — an order that is grounded in free and sovereign nation-states, flows from the universal principles on which America was founded, and advances U.S. national interests —but to fundamentally revise world order, placing the People’s Republic of China (PRC) at the center and serving Beijing’s authoritarian goals and hegemonic ambitions.”

Report further states, “Chinese CCP today wields its economic power to co-opt and coerce countries around the world; make the societies and politics of foreign nations more accommodating to CCP specifications; and reshape international organizations in line with China’s brand of socialism. At the same time, the CCP is developing a world-class military to rival and eventually surpass the U.S. military. These actions enable the CCP to credibly pursue the quest — proceeding outward through the Indo-Pacific region and encompassing the globe — to achieve “national rejuvenation” culminating in the transformation of the international order.”

For our readers who do not know much about Tibet, here is a brief history of how CCP maintains a military occupation of Tibet that dates to the 1950s

Tibet requested military assistance from India. The spiritual leader of Tibet, the Dalai Lama, referred the matter to the United Nations (UN) on November 11, 1950. The UN General Assembly condemned the Chinese invasion of Tibet on November 18, 1950. On December 19, 1950, the Dalai Lama left Lhasa for the town of Yadong on the Tibetan-India border. Chinese and Tibetan representatives signed the Agreement of the Central People’s Government and the Local Government of Tibet on Measures for the Peaceful Liberation of Tibet in Beijing on May 23, 1951, which allowed the Dalai Lama to control internal affairs in Tibet. The Dalai Lama returned to Lhasa on 17 August 1951. Tibetans rebelled against the Chinese government in eastern Tibet (Sichuan Province) beginning in May 1956. Qimai Gongbo led a rebellion against the Chinese government in the Qamdo region beginning on July 21, 1956. The Dalai Lama traveled on an official visit to India from November 1956 to February 1957. The US Central Intelligence Agency (CIA) provided military assistance (weapons, ammunition, training) to Tibetan rebels beginning in December 1956. On December 18, 1956, the UN General Assembly approved a resolution calling for the end of Chinese repression against the Tibetans. Khamba tribesmen rebelled against the Chinese government in eastern Tibet beginning in August 1958.

The PRC government closed the monasteries in Tibet, and imposed Chinese law and custom in the region. The International Commission of Jurists (ICJ) established a seven-member commission of inquiry (Burma, Ceylon, Ghana, India, Malaya, Norway, Siam) headed by Purshottam Trikamdas of India on July 26, 1959. The Dalai Lama referred the matter of Tibet to UN Secretary-General Dag Hammarskjold on September 9, 1959. The UN General Assembly condemned China’s disrespect for human rights in Tibet on October 21, 1959. Some 340,000 Tibetans died during famines caused by economic reforms between 1960 and 1962.

The Chinese government established the Tibetan Autonomous Regioni (TAR) on September 9, 1965. In 1974, the PRC government ended its repression of Tibet and granted amnesty to Tibetans who had earlier been imprisoned. The US CIA ended military assistance to Tibetan rebels in 1979.

The Tibetan government-in-exile sent three fact-finding missions to Tibet from August 1979 to July 1980. Representatives of the Tibetan government-in-exile began a first round of talks with the PRC government in Beijing on April 24, 1982. A second round of talks began on October 19, 1984. Six Tibetans were killed during demonstrations in Lhasa on October 1, 1986, and some 500 individuals were arrested for their involvement in the demonstrations. On March 8, 1989, the PRC government imposed martial law and deployed 2,000 troops in Lhasa following several days of clashes between Tibetans and government police. Some 400 individuals were killed during clashes. Tibetans demonstrated against the PRC government in Lhasa beginning on September 27, 1989. The PRC government lifted martial law in Lhasa on May 1, 1990. Chinese government police shot and injured several Tibetans during protests near Lhasa on May 7-14, 1996. On May 20, 1996, Amnesty International (AI) condemned the government for the violent suppression of the Tibetan protesters. The European Union (EU) Parliament condemned China for its repression of Tibetans on May 23, 1996. The EU Parliament condemned China for human rights violations against Tibetans on March 13, 1997. The EU Parliament appealed for peaceful negotiations between the Chinese government and the Dalai Lama on May 14, 1998. Some 3,100 Tibetans fled as refugees to India in 1998. Some 128,000 Tibetans were refugees in neighboring countries in December 1998, including 110,000 refugees in India and 18,000 refugees in Nepal. The special envoy of the Dalai Lama held four rounds of talks with the PRC government from September 9, 2002 to July 1, 2005. Representatives of the Dalai Lama began a fifth round of talks with PRC government officials on February 16, 2006. Tibetans rioted against Chinese government rule in Lhasa and other Chinese provinces on March 14-16, 2008, resulting in the deaths of at least 19 individuals. Representatives of the Dalai Lama held talks in Beijing in July 2008. On October 27, 2009, the PRC government confirmed that two Tibetans were executed for their involvement in the March 2008 riots in Lhasa. Padma Choling, an ethnic Tibetan, was appointed as governor of Tibet by the PRC government on January 15, 2010. PRC government police raided a Tibetan Buddhist monastery in Sichuan Province on April 21, 2011, resulting in the deaths of two individuals. Lobsang Sangay was declared the winner of the election for prime minister of the Tibetan government-in-exile with 55 percent of the vote on April 26, 2011, and he was officially sworn in as prime minister in Dharamsala, India on August 7, 2011. Some 49,000 Tibetan exiles throughout the world cast ballots in the election. Jigme Gyatso, a Tibetan political prisoner since 1996, was released from prison by the PRC government on March 30, 2013.

Shouldn’t the International Community work towards freedom of Tibet from the Chinese CCP that maintains a military occupation in Tibet since 1950?

Wouldn’t many of the world’s problems automatically get resolved once Tibet gains independence from Chinese CCP? Tibet will create a buffer zone between India and China. India will have no border with China. China will have no land connection with Terrorist producing factory of the world viz Pakistan. Focus can then be placed on freedom of smaller nations like Balochistan, Sindhudesh, Pashtunistan. As a result, Terrorism will be completely routed from this region and there will be peace in Indo-Afghan region. Smaller countries like Nepal and Bhutan will be free from Chinese intervention.