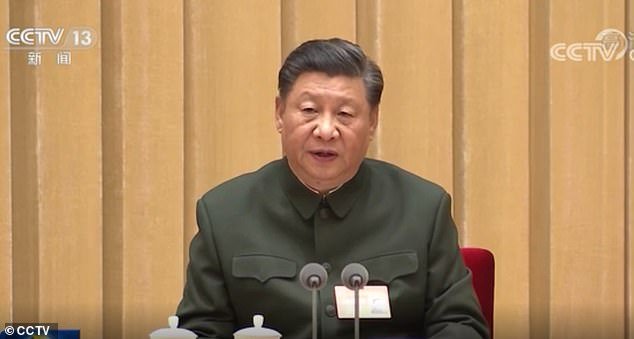 He told his armed forces to step up training under combat conditions and ‘not fear death and hardship’, reported Chinese CCP run state media, citing the leader.

Xi has previously called for military readiness amid spiking political tensions between Beijing and other countries, particularly the US and self-ruled Taiwan, over coronavirus pandemic, territorial disputes and human rights.

His usage of the word “wars” connotes that Xi intends to open war at multiple locations at the same time.

South China Sea is already very hot and there are indications that China will soon launch a military invasion on Taiwan. China has helped Biden in 2020 US elections and it is possible that Biden may pull back US Navy deployments from the South China Sea as soon as he takes over as US President.

If Biden pulls back US Navy from South China Sea, it will be a signal to Xi to launch a full military invasion on Taiwan. Xi will also use his military power to force border resolutions on his neighbors in South Asia. Xi will take full control over the entire south China sea, denying the Asian countries of their maritime boundaries of 200 nautical miles that every country is entitled to as per the International law.

China may also forcefully take over the disputed Islands from Japan and other countries in the region.

Talking about “wars”, China may also launch an attack on India to grab more land in Ladakh and other sectors. It should be noted that China is already occupying approximately 38,000 sq km of Indian lands in Aksai Chin in Indian Union Territory of Ladakh.

Chinese keyboard troll army has in the past projected China a world super power by releasing propaganda videos of Chinese military exercises and used such propaganda videos to threaten not only its neighbors but also other counties as far as in Europe and the US.

Last month, the Communist leader told his Navy troops to ‘focus all [your] minds and energy on preparing for war and maintain a high level of alert’ during a tour in Chaozhou of Guangdong province.

While visiting the marine base, Xi urged the soldiers to ‘speed up improving [their combat capabilities]’ in order to become a ‘multi-functional, rapid response, all-weather and region’ elite force.

Xi again stressed the importance and urgency of war preparations while addressing the Central Military Commission in Beijing on November 25.

Speaking to a full room of military commanders, Xi is quoted by Chinese CCP run state news agency Xinhua by saying that the key to winning wars is to strengthen training.

‘Military training is the regular and central task of the army. It is the basic way to generate and improve combat effectiveness. It is the most direct preparation for military battles,’ said Xinhua, citing Xi.

Xi also called for the forces to maintain the fighting spirits of ‘fearing neither hardship nor death’, adding that the country’s military development and situation entered ‘a new era’.

He insisted that the party’s goal was turning the People’s Liberation Army (PLA) into a world-class fighting force.

His use of the words “fearing neither hardship nor death” springs from the hardships faced by Chinese sissy kids in Ladakh Sector where the temperature goes to -40 degrees and at an altitude of above 4000 meters the air pressure is low and the oxygen is less. At such height recently in a clash with Indian Army, 20 unarmed Indian Army soldiers were brutally murdered by Chinese PLA armed with rods studded with nails.

Earlier this month, China’s state broadcaster released footage of the country’s soldiers launching multiple missiles to take down enemy targets during a live-fire drill. However media fact check later reported that it was a video from 2016 War exercise.

In a clip released by Beijing in September, nuclear-capable bombers are seen carrying out a simulated attack on what appears to be the US Andersen Air Force Base on the Pacific island of Guam.

China has been flexing its military muscles since tensions heightened between China and the United States over Taiwan. The current situation is dicey and dangerous. Under President Donald Trump, US-China relations overall and in the South China Sea in particular rapidly deteriorated. China has escalated the situation with belligerent rhetoric and military posturing. There is a mutual distrust between China and US under President Trump.

The South China Sea is at the crux of the US-China strategic contest for regional dominance and this is unlikely to change. The current US approach is to “meet China’s greater assertiveness with a more assertive use of force of its own.” According to former US defense secretary Mark Esper, the US is aggressively building “capabilities … we need to deter China from committing to a major confrontation.”

Hu Xijin, editor-in-chief of the Communist Party mouthpiece Global Times, as always, threatened United States saying that “the US should be reminded to distance itself from China’s core interests. Don’t play with fire off China’s coast … and don’t overdo it in the South China Sea.”

China certainly hopes that relations will improve under Biden. Vice-Foreign Minister Le Yucheng called on the new American administration to meet the Chinese side halfway and move relations forward “along the right track.” The Biden administration has an opportunity to return relations on these issues to a more stable agreement to disagree, including in the South China Sea.

This is the situation Biden inherits. No one – including China’s leaders – expects fundamental changes in US policy regarding China and the South China Sea.

Washington approved two sales of weapon and defence systems worth around $4.2billion (£3.25billion) to the democratically ruled island – moves that infuriated Beijing.

In response, China’s Ministry of Foreign Affairs vowed retaliation against the United States and announced sanctions on American companies involved in the weapon deals, including Boeing and Lockheed Martin.

The news comes as China’s propaganda machine has been boasting about its military capabilities while sending warnings to other countries amid souring relations with the US and Taiwan.

Related Article Australia Calls Out China Not to Resort to Coercion