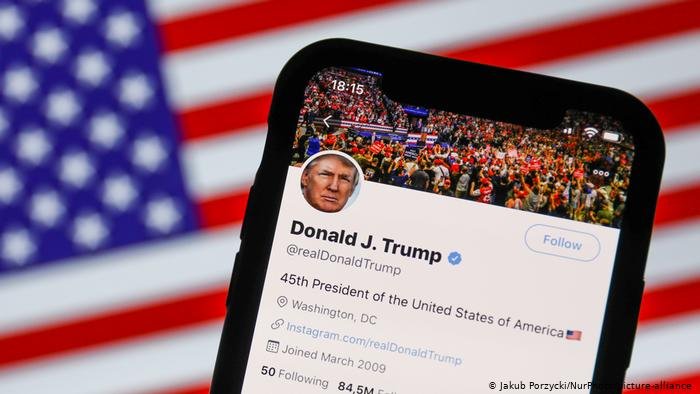 Twitter permanently banned Trump’s twitter account on Friday 8-January-2020, the action which is seen by most of the people as Politically motivated and an attack on Free Speech.

Mr Trump slammed the ban in a statement to the media and said he would have a big announcement soon, adding that Twitter had “gone further and further in banning free speech” and was in cahoots with the “radical left”.

In a set of tweets from his @POTUS handle, he tweeted the following however politically motivated Sovial Media platform Twitter removed those tweets as well.

“As I have been saying for a long time, Twitter has gone further and further in banning free speech, and tonight, Twitter employees have coordinated with the Democrats and Radical Left in removing my account from their platform, to silence me — and YOU, the 75,000,000 great patriots who voted for me.”

“Twiter may be a private company but without the government’s gift of Section 230 they would not exist for long. I predicted this would happen.”

“We have been negotiating with various other sites, and will have a big announcement soon, while we also look at the possibilities of building out our own platform in the near future,”

The same message was tweeted from @TeamTrump, the Trump campaign’s official account. The messages remained active for a few minutes before the account was suspended.

Here are the screenshots of the tweets by President Trump from his Social Media handle.

Twitter said Friday evening that it took action against the four tweets that President Trump shared from the @POTUS account.

“As we’ve said, using another account to try to evade a suspension is against our rules,” said a Twitter spokesperson. “We have taken steps to enforce this with regard to recent Tweets from the @POTUS account. For government accounts, such as @POTUS and @WhiteHouse, we will not suspend those accounts permanently but will take action to limit their use.”

Apple Inc on Friday also gave the service 24 hours to submit a detailed moderation plan, pointing to participants using the service to coordinate Wednesday’s siege of the U.S. Capitol building.

The actions by the two Silicon Valley companies mean that the network seen as a haven for people expelled from Twitter could become unavailable for new downloads on the world’s main mobile phone app stores within a day. It would still be available in mobile browsers.

Patriots and Conservative social media users in the United States have flocked to Parler, messaging app Telegram and hands-off social site Gab, citing the more aggressive policing of political comments on mainstream platforms such as Twitter Inc and Facebook Inc.

In suspending the service, Google, whose software powers Android phones, cited its policy against apps that promote violence and gave recent examples from Parler, including a Friday post that began “How do we take back our country? About 20 or so coordinated hits” and another promoting a “Million Militia March” on Washington.

Parler Chief Executive John Matze said in a post on Friday that Apple was applying standards to Parler that it did not apply to itself.

In a statement, Google said that “for us to distribute an app through Google Play, we do require that apps implement robust moderation for egregious content. In light of this ongoing and urgent public safety threat, we are suspending the app’s listings from the Play Store until it addresses these issues.”

In a letter from Apple’s App Store review team to Parler, Apple cited participants of the mob storming the U.S. Capitol building on Wednesday.

“Content that threatens the well-being of others or is intended to incite violence or other lawless acts has never been acceptable on the App Store,” Apple said in the letter.

Democrat supporting News Media handles and social media platforms had been critical of President Trump throughout his tenure of 4 years. It was as if these Tech giants were at war with President Trump.

Doesn’t this ban show that the social media giants are Politically Motivated and want to control the content to be posted on their platforms to suit their political agenda?

What is wrong when Donald Trump says that he will start his own social media platform?

Doesn’t this ban gives an idea of how the Social Media companies will continue their discrimination against Patriots, Nationalists, Conservatives during Biden Presidency?