Pakistan Ramps Up Drug Produce to Shore Up Flagging Incomes 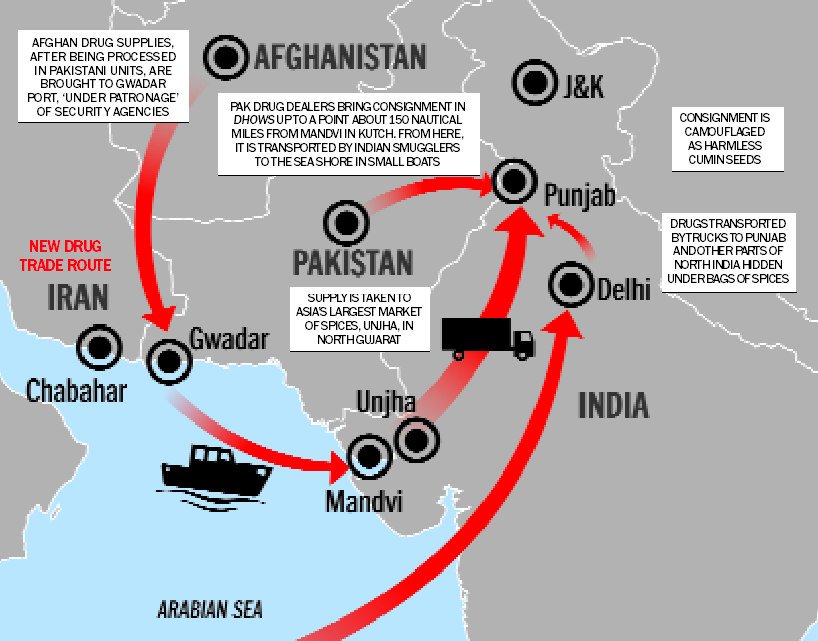 Pakistan ramps up drug produce to shore up its flagging incomes. Pakistan Intelligence Agency ISI that is behind the Drugs production and trafficking in “Golden Crescent” route has in last one year ramped up its attempts in drug trafficking because of its falling incomes and the need to keep the fire of terrorism burning in India and Afghanistan.

Money earned in this lucrative drug trafficking trade is used in financing Terrorism activates in India and Afghanistan, supplying arms and ammunition to Terrorists inside India and arming Taliban Terrorists, besides providing funding for different Anti-India and Anti-Afghanistan activities including organizing protests in other countries including US, Canada, UK and other European countries.

In a major exposé recently, the Narcotics Control Bureau has unearthed an international narcotic drugs syndicate which is allegedly run jointly by the Taliban, Pakistan’s Inter-Services Intelligence and the Liberation Tigers of Tamil Eelam and also has roots in Iran, Afghanistan, Pakistan, India, Australia and the Maldives. “Because of heavy troop deployment along the international borders, narcotic drugs are being smuggled by sea.

Heroin from Afghanistan is smuggled into Pakistan by the Taliban and ISI and then shipped out from the Karachi port in fishing vessels to Sri Lanka, Maldives and Australia. The other route takes the contraband drugs to Mozambique.

“A lot of mid-sea transfer takes place in territorial waters of India or very near to its territorial waters. The cross continent illicit drug trade has some Pakistani, Sri Lankan and Indian nationals, who are arrested and jailed on drug trafficking charges in Sri Lanka and lodged in prisons there. They are involved in the coordination of the drugs movement, primarily heroin, from Afghanistan,” he said.

The NCB, Chennai zone on Friday arrested two Sri Lankan nationals — M M M Nawas and Mohamed Afnas — from Chennai. “The duo (allegedly) holds important positions in the multinational heroin syndicate and control the mid-sea pick-up and delivery of narcotic drugs from Pakistani and Iranian vessels,” Malhotra added. Nawas allegedly confessed that he had links with the LTTE. He had come to India 10 years ago and has been living in Chennai since then. Afnas had infiltrated into India by boat in 2018. He came to Chennai from Rameshwaram.

Both have been living in India without valid passports. On November 26 last year, the NCB, in a joint operation with the Coast Guard, had detained a Sri Lankan fishing vessel, ‘Shenaya Duwa’, in Indian waters near the Tuticorin Port and had seized 95.875 kg of heroin and 18.325 kg of methamphetamine from it. Besides drugs, they had also seized five pistols and magazines from the possession of the vessel crew. The six-member crew, all Sri Lankan nationals, were arrested and are now in judicial custody. “We had been working on leads for more than one-and-ahalf years. Our Intelligence shared with the Sri Lankan authorities has led to the seizure of 100 kg of heroin,” Malhotra added. The total worth of seized contraband seized by the NCB is pegged at around Rs 1,000 crore.

As per an earlier report drug smugglers were trying to flood the Indian Subcontinent region with drugs. “There are reports that nearly 3 lakh tonne of heroin, accumulated over the last few years in Pakistan due to heightened security on the Indian border, was waiting to be smuggled into India and abroad.”

“There are reports that nearly 3 lakh tonne of heroin, accumulated over the last few years in Pakistan due to heightened security on the Indian border, was waiting to be smuggled into India and abroad.”

Coupled with these is the use of drones to drop heroin packets inside Punjab. Every day and every smuggler poses a new challenge.

On 23-January 2021, troops of Indian Border Security Force BSF detected a 150m long & 30 ft deep tunnel during an Anti-Tunneling drive in area of Pansar, Jammu. This is the 4th tunnel detected by BSF in last 6 months in Samba, Hiranagar & Kathua area & 10th in Jammu Region.

If 10 tunnels have been detected and identified in Jammu Region alone in last one month, you can imagine how many more such tunnels exist on the long international Border between India and Pakistan that includes the border with Punjab, Rajasthan and Gujarat.

These tunnels can be used for infiltrating not only terrorists, arms and ammunitions into India but also used for smuggling drugs inside the Indian territory.

As per the Indian Border Security Force BSF sources, BSF troops had also foiled an infiltration bid in the same area in Nov 2019 wherein BSF troops had fired upon the party trying to infiltrate into India. BSF had also shot down a Pakistani Hexacopter carrying loads of weapons & ammunition in June 2020 in same area.

In recent times Plastic Pipes have been found that have been used by Pakistan ISI agents to drop drug consignments from Pakistan side to the Indian side.

As per another report, A huge consignment of narcotics was recently confiscated by the South African elite crime investigation unit – Hawks from a truck in Hluhluwe town on September 9. The consignment of 342.5 kg of Heroin has been valued at 87.5 million Rands and was enroute to KwaZulu-Natal.

As many as 250 packets of heroin were found hidden in the truck.

Observers argue that the drug consignment might have originated from Pakistan as Mozambique is being predominantly used as a junction to route narcotics coming in from Pakistan.

Pakistani boats/Dhows bring narcotics to the Mozambique coast and then they are transported to the southern part of the African continent till South Africa. Mozambique, Tanzania, and Kenya form the focal points of this route, called the southern route of Pakistani drug trade.

It is believed that drug dealers from these three countries have developed connections with Pakistani drug peddlers who distribute it all over the world. It is also believed that Pakistani ISI has developed a deep drug supply chain.

The areas of opium cultivation in Afghanistan are mostly under Taliban’s control, the ISI procures the opium poppy, processes it and then distributes it all across the world, generating massive revenue for the spy agency.

Besides, a number of Pakistani drug peddlers are settled in countries like Mozambique,Tanzania, and Kenya who procure and distribute drugs from their fellow countrymen and ISI handlers.

In a similar confiscation, a Pakistani boat was caught at Central Mozambique’s Biera port on April 30, 2020. Twelve Pakistanis were arrested and put behind bars in Mozambique for smuggling heroin from Pakistan.

According to Mozambique’s law enforcement agencies, there were no signs of fishing, as claimed by the boat crew, and traces of heroin were discovered in the boat.

Prior to this, 13 Pakistanis were detained at the Cabo Delgado province coast for transporting heroin and amphetamines in December 2019. Further, 12 Iranian nationals were also detained for carrying heroin that originated in Pakistan.

Similarly, around 26 Pakistanis travelling in two Dhows were arrested by Tanzanian law enforcement agencies for drug trafficking. Later, 12 of them were released after Pakistani ISI intervened in the matter. These are just a handful of examples that highlight the efforts of the ISI to form the new drug cartel with outlaws based in African nations.

As per an earlier report, Drug Peddlers operate from Gwadar port in Pakistan, which is developed by China. It stares at Chabahar seaport in Iran which India has helped build. Pakistani drug peddlers have been operating from Chabahar and it is not unusual to meet traders from Pakistan. The Pakistani port is next to an abandoned desert-like area called Pashni in Balochistan from where drugs from Afghanistan are routed to the seaport. This report exposed several instances of drugs smuggling originating from Pakistan.

On January 31, seizure of 232 kg of narcotics and 200 kg of chemical in Amritsar was linked to this gang. Has footprint in Afghanistan, Pakistan, Iran, Gujarat, besides Punjab

Drugs transported from Afghanistan to Gwadar seaport in Pakistan via the deserted Pashni area. From here, boats believed to be enjoying Pakistan protection bring the drugs to boats run by Indian smugglers like Arshad Sota. They offload it at Unjha port in north Gujarat, from where it is transported by land to Punjab in trucks transporting cumin seeds

In September last year, seizure of 115 gm of cocaine, 13 gm of ephedrine, 80 gm of hashish oil and 292 intoxicant capsules was linked to gang. Also recovered were mixing agents of 900 grams. Total worth: Rs 2 crore. Canadian-Punjabi gang is spread in Mexico, USA, Canada, Delhi, Goa and Punjab.

Cocaine from Mexico sent to India via USA and Canada in printers. At New Delhi, courier companies transported the consignment to Jalandhar

Heroin found in June 2019 began its journey from Afghanistan. It reached Wagah trade centre via Pakistan. It was hidden in trucks laden with rock salt bags for supply in Kashmir and Punjab

Sahil Khan alias Musa — based in Pakistan, he runs the network along with key aides Farooq Lone and Amir Noor Tariq Ahmed Lone from Handwara in Kashmir is a rock salt trader and drug smuggler Guprinder Singh Babbar was an Amritsar trader who supplied Tariq the rock salt imported from Pakistan. He died under mysterious circumstances in Amritsar jail after his arrest Ranjit Singh alias Cheeta (absconding). Belonging to Havellian village in Tarn Taran, his brother Balwinder Singh, alias Billa, was arrested by STF. Three other brothers also involved in drug smuggling. Status: Case being probed by NIA

Multiple drug seizures along the LoC and in the deep waters of the Indian Ocean Region have broken the back of ISI, which is now looking towards other parts of the world to sell its narcotics products in order to generate revenue. More and more attempts are being made by Pakistan to dispose off its 3 lakh tonne stock of heroin and Pakistan Intelligence Agency is taking all kind of risks. Even a small portion of this huge stock pile is smuggled successfully, it will fund Pakistan Intelligence Agency ISI with the required funds to continue its terrorist activities in India and in Afghanistan.

However Financial Action Task Force (FATF) which is the global money laundering and terrorist financing watchdog has closed its eyes when it comes to blacklisting Pakistan in the FATF Blacklist under the influence of China.

Will Financial Action Task Force (FATF) open its eyes and blacklist Pakistan? Will International community wakeup and impose strict sanctions against Pakistan to end this trade of selling death in the form of drugs?

Will International community work with Pakistan’s neighbors to shut down the Terrorist producing factories and the drug trafficking trade that Pakistan Intelligencce Agency uses to carry out its nafarious designs?