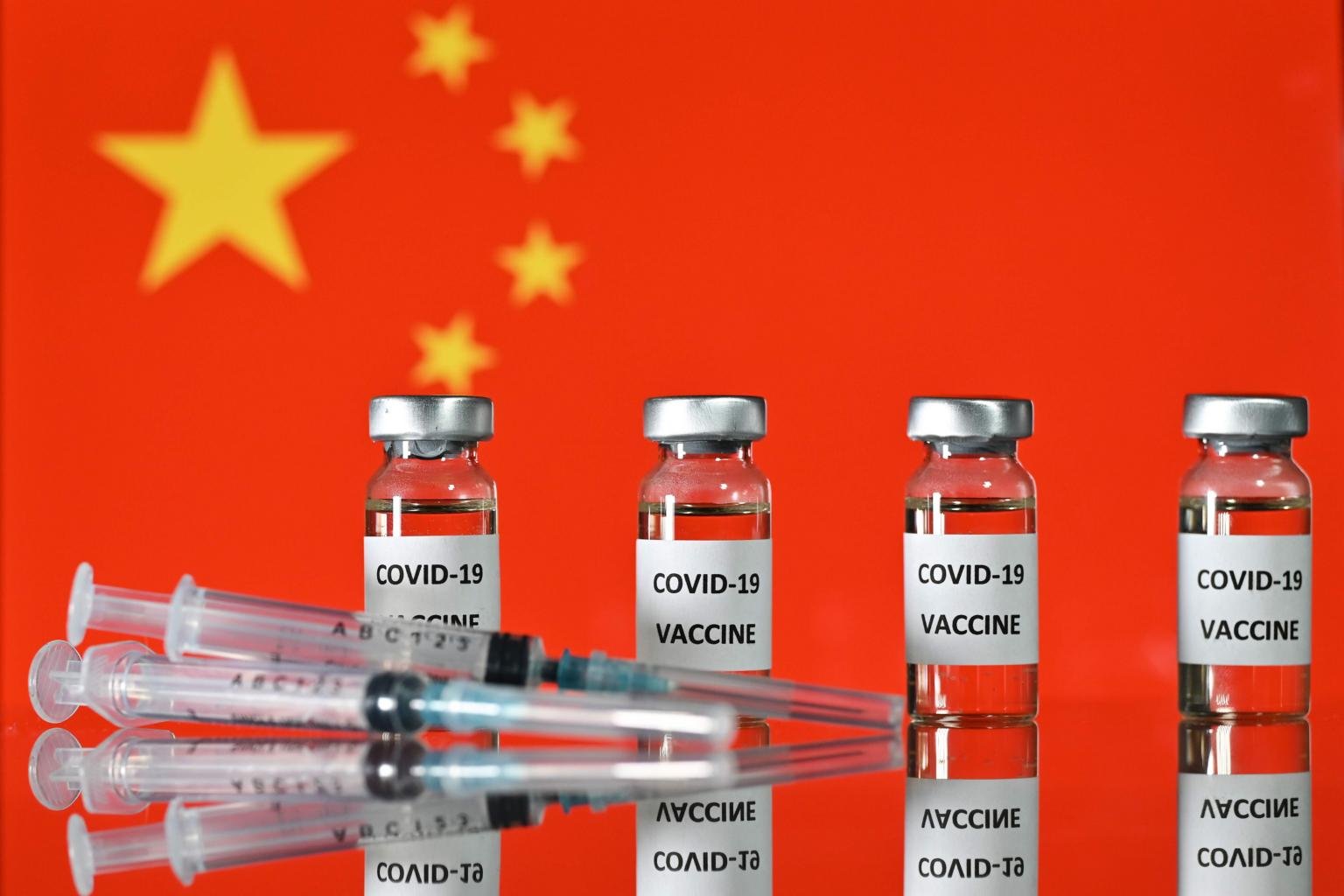 China said it will ease visa application requirements for foreigners seeking to enter the mainland from Hong Kong if they have been inoculated with Covid-19 vaccines made in China. In a way, China forces Chinese Vaccine on the world by making Chinese Vaccine Mandatory if you need hassle free entry in China or Hong Kong.

The new rule will take effect on Monday to resume “people-to-people exchanges between China and other countries in an orderly manner,” according to a government announcement Friday.

Foreigners visiting the mainland for work will face less paperwork in visa applications if they are able to show they have received vaccines produced in China. With the vaccine certificates, these travelers will also be able to skip the requirement for a Covid-19 test or fill out a travel declaration form.

The rule also expands the scope of applicants eligible for a visa due to humanitarian needs, such as taking care of family or attending funerals, if they have received Chinese vaccines. Other applicants should still follow the earlier visa procedure, according to the statement.

The change comes as China has been promoting its home-grown shots globally amid competition from western vaccines. It recently entered a deal with the International Olympic Committee to provide shots made in China for athletes attending the Tokyo Olympics in July and Winter Olympics in Beijing next year.

Most countries in the West have not yet approved vaccines developed by Chinese pharmaceutic companies, which have been reticent in sharing details of their vaccine trials crucial for building public trust around the world. China is having more success introducing its vaccines in Africa and Latin America, where countries including Zimbabwe and Equatorial Guinea have received vaccine aid from Beijing.

As per a report published on BBC, Coronavirus vaccine developed by China’s Sinovac has been found to be 50.4% effective in Brazilian clinical trials, according to the latest results released by researchers.

It shows the vaccine is significantly less effective than previous data suggested – barely over the 50% needed for regulatory approval.

Brazil’s government has received 2 million doses of coronavirus vaccine from India. The Brazilian government also announced that it was negotiating the purchase of 30 million coronavirus vaccine doses from Russia and India, after regulators made it easier for the treatments to win emergency-use authorizations.

Even the Pakistan that is considered as a colony of China, has rejected Chinese Vaccine for Chinese Corona Virus and has requested its arch rival India to send them the vaccines.

The Chinese policy announcement, which covers foreigners applying for visas in the Chinese territory, comes a day after the United States, India, Japan and Australia announced plans to provide vaccines more widely to other countries. The four so-called Quad powers promised to help finance the production in India of at least a billion doses of coronavirus vaccine by the end of next year.

China is trying to increase the international appeal of its shots, even as scientists and foreign governments urge Chinese vaccine makers to be more transparent with their clinical trial data. Guo Weimin, a Chinese government spokesman, said that China had sent vaccines to 69 countries by the end of February and begun commercial exports to 28 countries.

Chinese state media organizations have also begun a misinformation campaign that questions the safety of the Moderna and Pfizer-BioNTech shots and promotes Chinese vaccines as better alternatives.

Chinese-made vaccines have not yet been approved by most regulators in the West, though Hungary has agreed to buy five million doses. China has not yet approved the manufacture or distribution of foreign vaccines within its borders either.

This week, China introduced an international electronic passport for its citizens that shows whether a traveler has been vaccinated against the coronavirus. But it was not immediately clear how much of a difference Saturday’s policy announcement by the Chinese Foreign Ministry would make for foreigners living in Hong Kong, given that China has been issuing almost no visas lately.

In addition, Hong Kong’s borders have been closed to nonresidents for nearly a year. So the new policy will not help many foreigners in other countries who want to return to mainland China for work or family reasons.

Alan Beebe, the president of the American Chamber of Commerce in China, said that border restrictions had become the biggest concern for multinationals doing business in the country, and he questioned the need for restricting entry based on which vaccine was chosen by travelers.

Foreign multinationals that have invested trillions of dollars in setting up their manufacturing and businesses in China are worried for not being able to send their overseas staff to China.

As per a report published on 8 MARCH 2021 by HONG KONG FREE PRESS, One person has died while two others remain in critical condition after suffering serious adverse effects within days of being vaccinated against Covid-19. All three patients had received China’s Sinovac vaccine.

A 55-year-old woman passed away at Kwong Wah hospital on Saturday morning after suffering an acute stroke and a subsequent heart attack. She had received her jab at the Kwun Chung Sports Centre vaccination centre three days prior.

A third case of a patient passing away within days of receiving the Sinovac vaccine was reported. The 71-year-old man was admitted to United Christian Hospital after receiving the jab. He died of a suspected heart attack.

Separately, two elderly citizens were sent to intensive care over the weekend with serious adverse symptoms, also within days of receiving the vaccine.

A 72-year-old woman was sent to ICU at Prince of Wales hospital on Sunday after suffering from malaise. She had received her Sinovac jab at the Tseung Kwan O Sports Centre the previous day.

Another two individuals were also sent to hospital after one suffered chest pains and another broke out in an allergic reaction after receiving their shots.

The China-developed Sinovac vaccine is not administered to persons aged 60 and over in mainland China. It had been approved for emergency use in Hong Kong after a decision by local authorities waive a requirement for developers to publish its final-stage trial results in peer-reviewed medical journals. It is like using people of Hong Kong as lab rats by mainland China.

Meanwhile Chinese Communist CCP controlled media and experts are diverting the blames to pre-existing conditions instead of the Sinovac vaccine. However they have failed to explain why the 60+ year old citizens of Hong Kong were used as lab rats to test Sinovac, while they could have been given other vaccines.

The government has sought to provide a HK$1 billion indemnity fund to grant financial support to individuals who suffer from serious adverse side effects as a result of being vaccinated against Covid-19 and their families.

A second shipment of around 758,000 doses of Pfizer-BioNtech vaccines arrived in Hong Kong last Sunday.

Despite the repeated insistence of Chinese experts that the medications are safe and the inoculation scheme should carry on, the number of people turning up for their appointments at community vaccination centres has continued to fall, from 89 per cent on Saturday 5-March 2021 to 64 per cent on Tuesday 9-March 2020, suggesting a drop in public trust.

China has already killed over 2.65 Million people worldwide using its Bio-Weapon Chinese Corona Virus. China has already crippled the world economy and brought it to a stand still while making windfall gains during the pandemic by supplying masks, ventilators and other medical equipment to the world. China has not yet shared the details about the Sinovac Vaccine and the trial data. How can people trust the Chinese Vaccine?

Shouldn’t the International Community be suing China for 2.65 million deaths and loses due to pandemic caused by Chinese Virus?

Shouldn’t the trade restrictions and trade embargos be implemented against China?

Shouldn’t all trade with China be suspended?