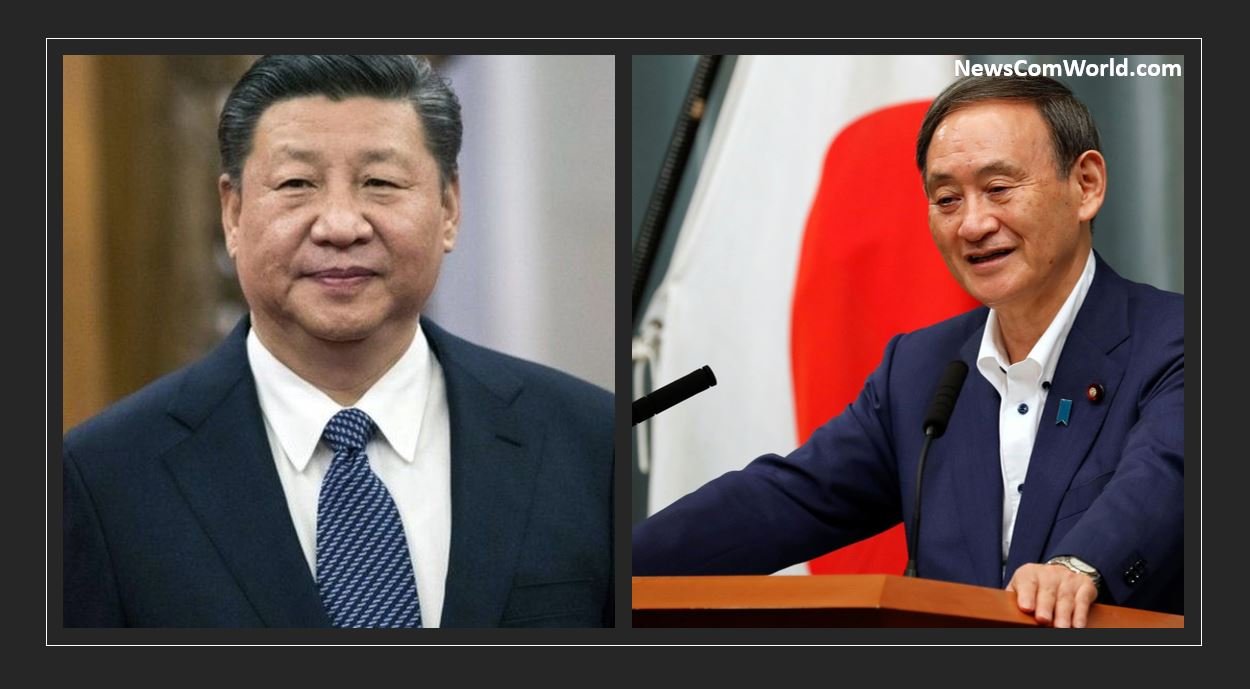 China’s New Focus is Japan. After a joint statement between Japanese Prime Minister Yoshihide Suga and US President Joe Biden on 16-April 2021 and thereafter statements coming out from Japan on 24-April 2021 regarding studying the possible responses of the Self-Defense Forces in the event of a military conflict between the United States and China over Taiwan, China has started giving threats to Japan via its mouthpiece The Global Times.

Japan and the United States still honor a 70-year-old treaty that commits both countries to act against common dangers. Both see Taiwan as a friendly Asia Pacific buffer against Chinese naval expansion.

The White House said April 16 on its website that Prime Minister Yoshihide Suga and Biden “underscore the importance of peace and stability in the Taiwan Strait.”

In U.S.- Japan Joint Leaders’ Statement: “U.S. – JAPAN GLOBAL PARTNERSHIP FOR A NEW ERA” dated 16-April 2021 between Japanese Prime Minister Yoshihide Suga and US President Joe Biden, there was a mention of China and Taiwan Strait:-

President Biden and Prime Minister Suga exchanged views on the impact of China’s actions on peace and prosperity in the Indo-Pacific region and the world, and shared their concerns over Chinese activities that are inconsistent with the international rules-based order, including the use of economic and other forms of coercion. We will continue to work with each other based on universal values and common principles. We also recognize the importance of deterrence to maintain peace and stability in the region. We oppose any unilateral attempts to change the status quo in the East China Sea. We reiterated our objections to China’s unlawful maritime claims and activities in the South China Sea and reaffirmed our strong shared interest in a free and open South China Sea governed by international law, in which freedom of navigation and overflight are guaranteed, consistent with the UN Convention on the Law of the Sea. We underscore the importance of peace and stability across the Taiwan Strait and encourage the peaceful resolution of cross-Strait issues. We share serious concerns regarding the human rights situations in Hong Kong and the Xinjiang Uyghur Autonomous Region. The United States and Japan recognized the importance of candid conversations with China, reiterated their intention to share concerns directly, and acknowledged the need to work with China on areas of common interest.

Thereafter there was an article in japantimes.co.jp dated 25-April 2021 with the title Japan studies SDF response to Taiwan Strait conflict, The Japanese government is studying the possible responses of the Self-Defense Forces (SDF) in the event of a military conflict between the United States and China over Taiwan, considering various scenarios within the strict limits of the country’s national security laws, government sources said.

Japan, which has restrictions on the use of force under its waiver of war constitution, has been alarmed by China’s increased regional assertiveness. Tokyo took a bolder stance with its US ally when the two men mentioned the importance of cross-strait peace in their leaders’ joint statement on 16-April mentioned above.

Tokyo’s studies focus on responses to cases where a security crisis emerges with the potential to affect its security if left unchecked, such as when a close partner is attacked and threatens Japan’s own survival or when Japan is directly attacked.

US bases in Japan, which are concentrated in Okinawa, could be at risk in the event of a Chinese attack on the US military, the sources said on Saturday 24-April 2021.

Under security laws, the SDF could provide transport and supply operations and related logistical support to the US military and its partners in the first scenario, while Japan would be allowed to practice self-defense. collective in the second scenario.

If a conflict extended to a direct attack on Japanese soil, such as on the Yonaguni or Senkaku Islands in Okinawa – the latter that China claims and calls Diaoyu – the SDF would be mobilized to defend Japan and engage in operations. of fight.

The government will now seek to clarify the scenarios envisaged by security laws that may be applicable in a possible conflict related to Taiwan and to clarify the potential activities of the SDF.

Any mention of Taiwan in a joint statement by any World leaders is enough to irk China. Communist CCP China’s mouthpiece, The Global Times, then starts its old tricks to throw empty threats on other sovereign nations who dare to stand up against China.

An article threatening Japan was published in Communist CCP China’s mouthpiece The Global Times on 24-April 2021. Communist CCP China has threatened Japan in the event that Japan interfere and provides logistics support to US against China over Chinese invasion of the Independent Taiwan, whose sovereignty and independence, China disregards.

Just read the first para and it seems like China considers itself the Master of Whole world and denies the leaders of soverign countries to even mention the reference to the name of the Independent Soverign country Taiwan or be able to discuss about their own defence in the event of Chinese aggression and attack. The first para reads :-

“Japanese State Minister of Defense Yasuhide Nakayama has talked nonsense to provoke China from time to time, poisoning the Japanese society’s understanding of China. Not only did Japanese officials mention China’s Taiwan in an official joint statement with the US, but Japanese media also openly predicted “three situations” under which the Japanese Self-Defense Forces can assist the US military, should a war occur in the Taiwan Straits.”

Thereafter comes the threat to stay away in case China Invades Taiwan or face Chinese attack on Japan as well:-

“Here I want to tell those arrogant Japanese: Do not provoke China and stop going too far, just be a “semi-colony” of the US; once something goes wrong in the Taiwan Straits, stay away or else you are asking for a beating.”

Notice that in the above para, China has shown how much intolerant they are and can easily be provoked if other countries disccuss about their defenses among themselves.

As Suga faced questions at home after the Biden visit about his designs for Taiwan, officials in Tokyo reportedly clarified on Wednesday that Japan would not send troops but could offer logistical support to the United States in the event of a conflict. In response to a question Tuesday from a member of the Japanese Diet about Japan’s commitment to Taiwan, Suga said the joint statement with Biden “does not presuppose military involvement at all”.

Although Japanese Prime Minister tried to tone down the situation by using the terms “does not presuppose military involvement at all.”, but that does not satisfy the almighty China of dreaming about the foul play :-

“Japanese Prime Minister Yoshihide Suga said on Tuesday that the Japan-US joint statement “does not presuppose military involvement at all.” I believe this is wise. However, related speculations continue to increase in Japan, which shows that some Japanese radicals want to act conceitedly on the Taiwan question.”

Here comes an open threat like the drunk streat goons give:-

We must tell those arrogant Japanese radicals: If a war breaks out in the Taiwan Straits and Japanese Self-Defense Forces implement military intervention to follow the US, then they will definitely become the target of the Chinese People’s Liberation Army. The deeper they are involved, the harder they will be hit, or even much harder. If their bases on Japanese soil act as vanguards, then those bases will be hit as well. They should completely drop their illusion of interfering in the Taiwan question.

Emboldened by lack of coordinated action against China for attacking the whole world by releasing the deadly Chinese Corona Virus worldwide that took lives of over 3.01 Million people worldwide, China has started giving threats to the other countries who dare to stand up against China. China also threatened to attack Australia if Australia drags itself along with US in war over Chinese invasion of Taiwan.

Since China’s new focus is Japan, is China desperately trying to search for a Winnable Front? China thinks they can attack sovereign countries like Japan, Australia, Taiwan just like Nazi Germany did and the whole International community will stay silent and China can escape any retribution?

Or has China gone mad like a Mad Bull and is threatening everyone who tries to stand in its way leading to Taiwan Invasion?

It is very much clear that the International community has failed to take any punitive action against Bio-Terrorist China for attacking the whole world with its Bio-Weapon by releasing the deadly Chinese Corona Virus worldwide that took lives of over 3.1 Million people worldwide. China is already very emboldened. If China invades Taiwan and the world remains silent, the time is not far, China will be threatening to invade South Asian countries or Europe or US tomorrow.