State Sponsored Hijacking Or Response To An Emergency – What happened In Belarus? 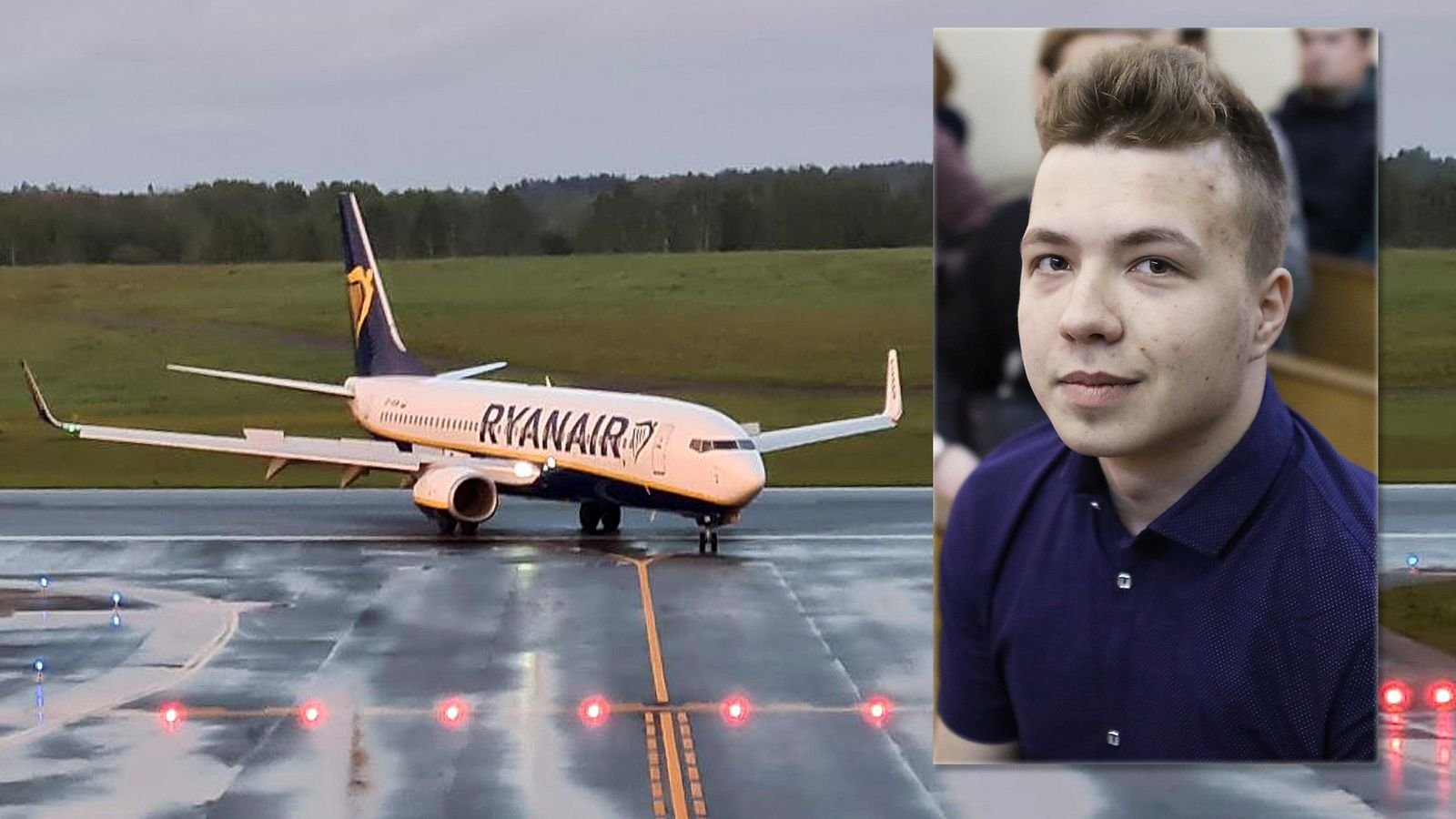 European countries on Monday moved to sanction Belarus and ban its state airline from flying to Europe as they sought to punish Belarusian President Alexander Lukashenko’s regime for forcing a Ryanair passenger flight to land in the country so it could arrest a leading dissident onboard. The recent diversion of Belarus has seen different versions of the story coming out which MSM Media outlets and some EU countries and US government has completely hidden and does not want public to know. What is the truth? Was it a state sponsored hijacking or was it a Response to an Emergency? – What happened in Belarus?

The international outcry has continued to grow over Sunday’s incident, in which without even any Investigation or looking into the circumstances and facts of the case, the EU Politicians and western MSM Propaganda outlets accused Belarus of having used a false bomb threat to divert the airliner to its capital, Minsk, in order to arrest Roman Protasevich, a blogger who played a key role in last years’ mass protests against Lukashenko.

The United States and European countries have called it “air piracy” and “state-sponsored hijacking.”

In a statement on Sunday, US Secretary of State Antony Blinken demanded an international investigation into the diversion of a Ryanair flight that made an emergency landing in Minsk shortly before leaving Belarusian airspace due to reports of a bomb threat.

What happened in Belarus?

On Sunday 23-May 2021, a Ryanair flight was making its way from Greece to Lithuania, when a bomb threat was reported. So it made a forced landing and the flight was diverted to Minsk, Capital of Belarus. A logistical the most logical choice. As per the interview Maksim Kiyanov, Minsk International Airport Shift Chief gave to Russian TV news channel, “The fact is, according to international rules, Minsk turned out to be the closest airport. And according to the same rules, the pilot decided to land here. So it was the decision of the Crew Commander. So the plane landed at the Minsk International Airport.”

Coincidentally, two passengers were most wanted in Belarus. What rule is broken there?

After the plane landed, the exiled editor of Telegram channel Belamova, Roman Protasevich, who was on board, was arrested by the Belarusian authorities. Protasevich, who previously worked as editor-in-chief of Polish-based opposition Telegram channel NEXTA Live, is wanted in Belarus on charges of inciting mass unrest/riots, social hatred, enmity and discord. The accusations stem from mass Anti-Government protests that rocked Belarus in the wake of the August presidential election, which were extensively covered by Warsaw-based NEXTA.

He has some pretty serious charges hanging on him. He was also responsible for releasing the private contact information including the phone numbers, addresses of family members of the Police Officers who managed last year’s Anti-Government protests.

NEXTA advocated for stronger Anti-Government action, сourting controversy for sharing unverified information that later proved to be fake. NEXTA has been designated an extremist organization in Belarus on par with Belamova, which was set up by popular blogger and US government-funded Radio Free Europe/Radio Liberty (RFE/RL) consultant Igor Losik last year.

Allegations that Roman denies but if proved guilty he could face up to 15 years behind bars. Diverting the plane is pretty common these days. In 2013, US diverted a plan and EU stopped the plane and wanted Snowden. Similarly some other country has done it in the past. Issue here comes with arrest of Roman Protasevich.

Adding fuel to the fire, there were reports carried by a Telegram channel considered to be close to the Belarusian government that Belarusian President Alexander Lukashenko personally ordered a MiG-29 fighter jet to escort the plane to the Minsk airport. In its statement, Ryanair made no mention of the reported escort, noting only that “the aircraft landed safely” and that “security checks were completed by local authorities” after the passengers disembarked. The company said the decision to divert to the Minsk airport was made after Belarusian air traffic control (ATC) notified the crew of “a potential security threat on board.”

US and Europe had provided political, moral and deep financial support to Belarusian opposition. There were huge supporters of last years anti-Government protests and for the candidate Sviatlana Tsikhanouskaya who lost Presidential elections last August. So condemning the plane incident fits into this broad pattern. Criticism is not necessarily a bad thing. The problem is that the same people who are crying foul now, were silent in the past in similar situations. Best example as we mentioned was in 2013, when the plane of then President of Bolivia was forced to land in Vienna, Capital of Austria. Why because there was a tip-off that Edward Snowden, the whistleblower who leaked classified US Intelligence was onboard. He wasn’t. But Elected President of Bolivia Evo Morales was forced to endure a 13 hour delay. On top of that numerous European nations had actually closed off their airspace to him. The Bolivian side was absolutely furious. They said it was a kidnapping, vestiges of colonialism. In a midnight press conference, Bolivian vice-president Alvaro Garcia said Italy and Spain had also denied the plane permission to fly through their airspace. He described Morales as being “kidnapped by imperialism” in Europe.

That kind of behavior was ok when EU sees it fit to hunt down a man Snowden who many see as a politically persecuted Hero, at the price of publicly humiliating an elected President is Ok. But here grounding a plane, following a bomb threat and subsequent detention of a man who is facing serious criminal charges is unacceptable.

Some would argue the term hypocrisy wouldn’t be a miss. But apparently EU doesn’t see it that way. There have not only been sanctions on EU but also banned all Belarusian planes from landing in the EU. Many people see it as double standards of EU, overstepping in the internal affairs of a sovereign nation.

Blinken suggested that the diversion of the plane was “based on false pretenses,” demanding Protasevich’s “immediate release.”

“This shocking act perpetrated by the Lukashenka regime endangered the lives of more than 120 passengers, including U.S. citizens,” the statement read.

Senator Bob Menendez (D-New Jersey), chairman of the US Senate Foreign Relations Committee, joined in the condemnation, calling for more sanctions to be imposed on Belarus after the incident.

“Enough is enough. The US and EU must significantly expand sanctions on Lukashenka’s dictatorship,” he said.

The remarks by the US politicians echoed those of European Commission President Ursula von der Leyen, who referred to the emergency landing as a “hijacking.”

“The outrageous and illegal behaviour of the regime in Belarus will have consequences,” she tweeted, hinting at possible sanctions for those responsible for the plane’s emergency stop.

Several European countries, including Belgium, Germany, Cyprus, Ireland, Poland, the Czech Republic, and Lithuania, where former Belarusian presidential candidate Svetlana Tikhanovskaya, who declared herself the legitimate leader of Belarus, lives in exile, expressed similar concerns over the Ryanair emergency landing and the arrest of Protasevich.

Belgian PM Alexander De Croo called the incident “unacceptable” and called for EU-wide sanctions on Belarus, including banning national carrier Belavia from landing in EU airports. Lithuanian President Gitanas Nausėda backed the proposal to bar Belarusian aircrafts from landing in the EU, suggesting further “serious sanctions against the regime” for what he called “a state-sponsored terror act.” Poland summoned the chargé d’affaires of Belarus to express its “firm protest” against the emergency landing, noting that the jet is owned by a company registered in Poland.

Shouldn’t the US and EU would have shown the same zeal against China that has killed over 3.47 Million people worldwide using its Bio-weapon of Chinese Corona Virus and brought their economies to a stand still? No? Because China is a stronger adversary?

Isn’t the Foreign countries fueling protests in other countries a regular phenomenon these days?

Recent example of foreign funded protests, riots, burning of public properties were seen all over India during Anti-CAA protests.

Thereafter there was a massive sit-in protest in Indian Capital, New Delhi during at Shaheen Bagh and funding came from foreign sources.

More recently in the farmers protests the Anti-Indian forces with foreign funding sources have been fueling these protests that have seized Indian capital for a long time now.

Like there should be no difference between good terrorists and bad terrorists, similarly the act to give moral, political and financial support to create mass unrest/riots/protests in other countries should considered as Criminal Acts irrespective of the countries/figures involved.