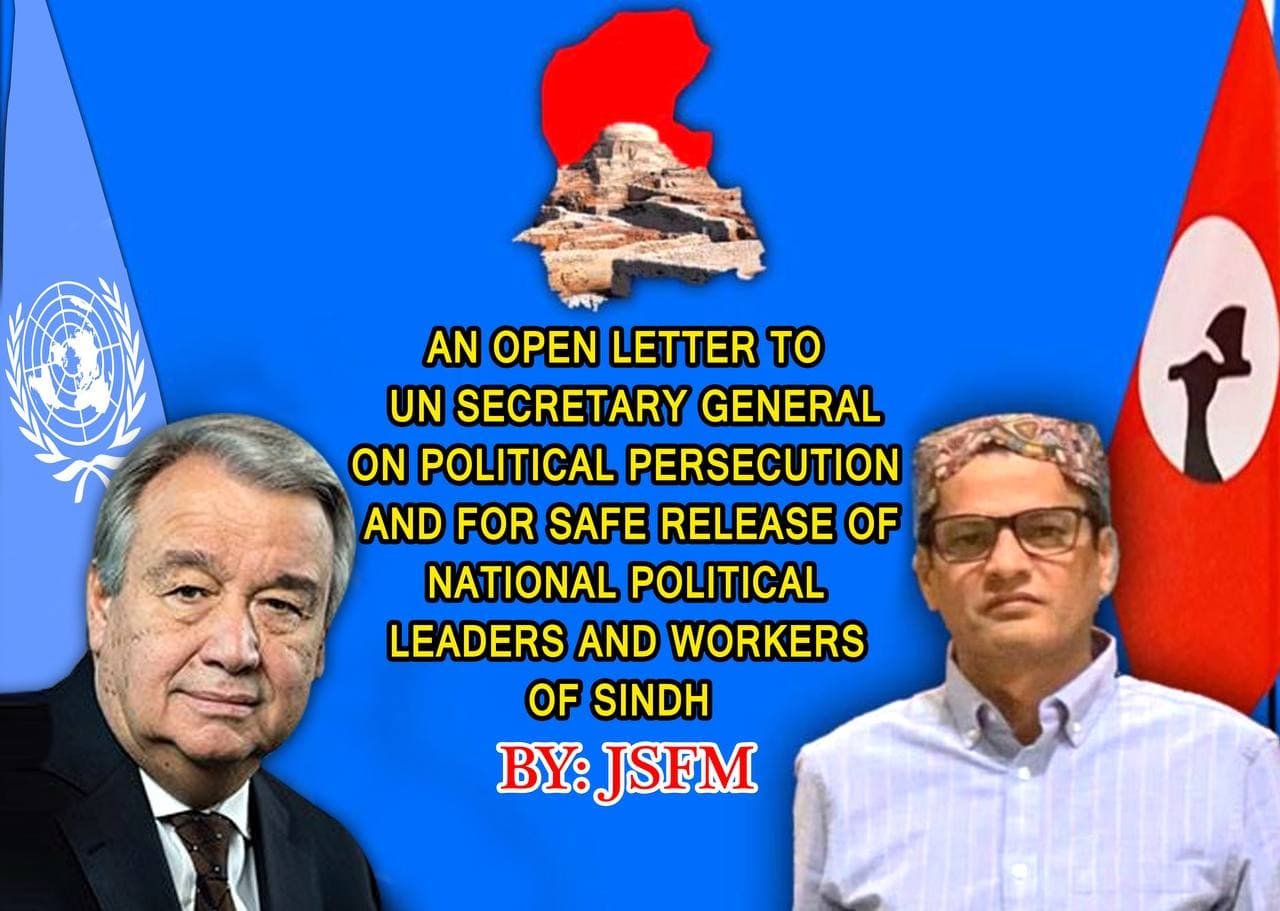 We received an open letter from Jeay Sindh Freedom Movement (JSFM) to the UN Secretary-General on the political persecution and for the safe release of national political leaders and workers in Pakistan Occupied Sindh. We are reproducing the letter here as it is for our readers without any edits:-

The UN General Assembly debate on responsibility to protect (R2P) and pervasive discrimination against the Sindhi nation.

In the month of May, 2021, when the UN General Assembly debate on responsibility to protect (R2P) began, on those very same dates of the month, a fresh round of ethnic cleansing and crimes against the indigenous Sindhi nation of the historical country Sindh was committed by Pakistani state agencies. Pakistani intelligence agencies and their pawns like Malik Riaz and his armed men, along with the police, Rangers and heavy machinery, moved in to destroy old historical heritage residences and houses of the Sindhi people in the Kohistan area of Sindh. Local inhabitants and Sindhi nationalists stood up against this cruel act of land grabbing and violence. After this incident, a peaceful movement was launched against the Bahria Town and other major settlement projects in Sindh. Later, on June 6, 2021, a peaceful protest was organized by the Sindh Action Committee and other nationalist political parties in which hundreds of thousands of Sindhi people from all trades of life took part. In the wake of that protest, a military operation was begun and continues till date against nationalist and common Sindhi people.

Sindh has been a distinct geographical frontier based on thousands of years of historical experience. So the Sindhis consider the separate existence of Sindh and the status of an independent sovereign country as outside also the jurisdiction of other independent countries of the world as useful for building the world. Original Sindhi inhabitants are the only real owners and heirs of every inch of Sindh. Mega projects like Bahria Town, DHA Mega City, Islands mega projects, coastal belt projects, Pakistan Army cantonments and other major settlement projects in Sindh are a clear indication that the Punjabi Pakistani establishment is aggressively pursuing an agenda to merge Sindh into a greater Punjab. We condemn this colonial occupation of the ancient villages of Kohistan, Gopa Town, Kathor, Moisa Dam and Panhwar mountains.

Malik Riaz, a civilian puppet of the Pakistan Army, with the help of the feudal-dominated government of Sindh, has launched its strategy of occupation of Sindh. Pakistan has been politically suppressing and persecuting 70 million ordinary Sindhi people since its creation. The right to self-determination is the natural birth right of the historical Sindhi nation, but a religious fundamentalist and feudal-colonial Pakistan has been denying our demand of freedom for 73 years. By arresting and abducting thousands of political workers and leaders of Sindh, Punjabi-dominated Pakistan is trying to create fear among us, which is in clear violation of the Geneva Convention.

Day and night, houses of political workers and the leaders of the freedom movement of Sindh are raided by armed Pakistan Rangers, police and Pakistani intelligence agencies. Hundreds of them have still not been presented in court. The Pakistani establishment and its puppet Sindh Government has begun a fascist operation against Sindhi nationalists to suppress the voice of the Sindhi nation.

Non-Sindhi land grabbers and ISI-supported builders and construction mafia projects like Bahria town, DHA, Islands project, and CPEC commercial and residential projects are all engineered military projects to convert the Sindhi nation into a minority on their own motherland soil.

Related Article Sindh Is Not An Orphanage. We Reject All Settlements Of Outsiders In Pakistan Occupied Sindh : Zafar Sahito

We are observing that the Sindhi, being an underprivileged nation, are potentially the most vulnerable, yet responsible institutions like the UNO, UNPO, Amnesty International, and civil society stakeholders like CICC global justice and the global centre for responsibility to protect civilians are not undertaking their entrusted responsibilities properly.

If the EU has made a public declaration of a commitment to eradicate and end criminal impunity in the world, then why are the enlightened countries of the EU not paying attention towards this human catastrophe in Sindh? Mere aspiration without action is sterile; it is the deed that matters. The US, EU, UNO and other governments and civil society institutions are hereby enjoined to be doers of righteousness in the world, and not talkers and hearers only. As in the debate of June 35, 2018 on the responsibility to protect and the prevention of genocide, war crimes, ethnic cleansing and crimes against humanity, wherein it was stated that “R2P remains to be the most effective principle around which the international community can coalesce when a vulnerable population faces the threat of genocide, war crimes, ethnic cleansing and crimes against humanity”. Sindhis are actual and potential victims of these aforesaid atrocities which are only accelerating in scale and frequency. As a Sindhi nationalist, human rights defender and victim of Pakistani intelligence agencies’ program of persecution myself, I have been struggling and raising my voice against all these aforesaid crimes and atrocities to every responsible organization and civilized community. I have not yet received any positive response or glimpse of hope in helping stop this.

I am writing this letter to you because we neither believe in Pakistan nor its judicial system. I am requesting you to please prevail on Pakistan to stop suppressing the secular, pluralistic Sindhi nation and demand the safe and immediate release of all nationalist leaders and political workers of Sindh arrested after the recent Bahria Town protest.

As in the 75th session it was stated in the debate, “We strongly urge member states to consistently and meaningfully uphold the commitment enshrined in paragraphs 138-139 of the World Summit Outcome Document”, Pakistan being a member of the United Nations is bound to respect R2P and the World Summit Document to ensure the inclusion of R2P as a standing item. And yet, Pakistan is not implementing it and is not being seriously questioned regarding its implementation of the prevention of all the aforesaid atrocities the Sindhi have been subjected to. The NGO’s, UNO and its sister institutions are not playing their roles in highlighting this situation to the United Nations to end this impunity and human catastrophe.

Will United Nations wakeup to the plight of family members of thousands of victims of enforced disappearances and murders by Pakistan Army and Intelligence Agency ISI in Pakistan occupied Sindh, Balochistan and Pashtun lands of KPK?

Since Pakistan is an extended Colony of China, people do not see much hope in present structure of United Nations with China having the VETO powers and won’t let any resolution pass against either itself or its extended colony of Pakistan.