Sindh Is Not An Orphanage. We Reject All Settlements Of Outsiders In Pakistan Occupied Sindh : Zafar Sahito 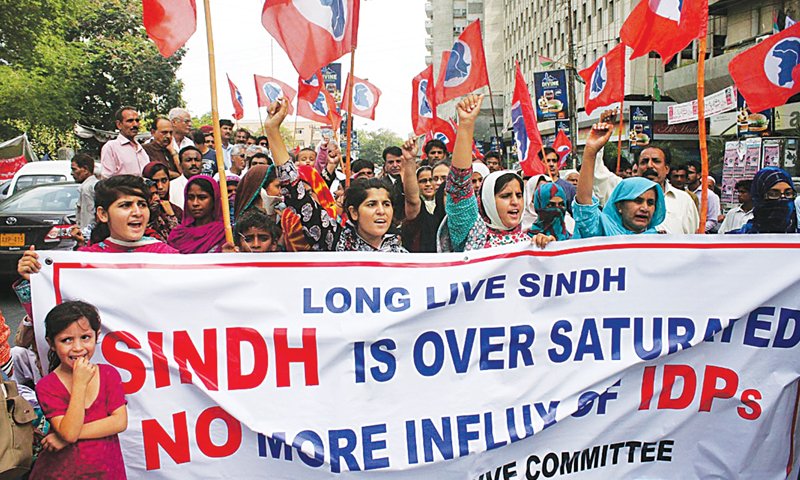 Washington DC: “Sindh is not an orphanage. We reject all settlements of outsiders in occupied Sindh”, said Zafar Sahito, Chief organizer of Jeay Sindh Freedom Movement.

Jeay Sindh Freedom Movement (JSFM) rejects all programs and planning of settlements of outsiders in Sindh. We have already suffered a lot from decades after creation of theocratic Pakistan in 1947. Sindh lost its real owners of land “Sindhi Hindus” during migration process after that hundreds of thousands non Sindhi people came to Sindh and still process is continue while original inhabitants of Sindh are becoming minority on their own motherland.

Punjabi Pakistani establishment intentionally sent Bengali settlers to Sindh in 1960. In 1979 Afghan refugees settlers were sent to Sindh due to war in their region. In 2003 thousands of Pashtuns refugees from Waziristan marched to Sindh. After that Sawat operation and Zarb-azab operations were reasons for Pakistani establishment to bring hundreds of thousands refugees to urban Sindh while rural influx of Punjabis, many of them military personnel, who they claim, obtained ancestral Sindhi lands unlawfully, still continues.

In a statement on February 13 , 2021 JSFM Founder & Chief organizer Zafar Sahito said, “Pakistan is planning to bring Kashmiri refugees in Sindh, Punjabi establishment have issued a letter to Sindh government to provide details of agricultural and residential land owned by Sindh government to bring more outsiders to Sindh for permanent settlement, while original inhabitants of Sindh are living miserable life below poverty line, people don’t have water, food, own land and proper housing. More than that thousands hectares of land and islands of Sindh are already sold to China for CPEC projects.

He said further, “Foreign nationals are not only creating economic burden on locals but settlement of ‘outsiders’ in Sindh, spreads HIV/AIDS and other epidemic Diseases also persisting shortage of basic necessities. Rehabilitation of refugees in the Sindh province is main cause of destruction of secular values. Presently, Sindh is becoming hub of terrorist groups and various radical Islamist organizations that have entered in Sindh with help of Pakistani intelligence agencies and establishment. These groups are threatening local sindhi people and spreading fear among peaceful people. These groups are under protection of Pakistani authorities.

Zafar Sahito said, “Afghan, Pashtun, Bangladeshi, Burmi and Kashmiri people were and are victims of Punjabi establishment also. Sindhi nation doesn’t hate any race, nation, but our concern is genuine because it is matter of our future generations and motherland. I want to request representatives and leaders of these persecuted nations that don’t become victims of Pakistani establishment conspiracy and ask your people for leaving Sindh peacefully”.

Related Article Christians And Hindus are Forcefully Converted to Islam in Pakistan : Why Is The World Silent?

On asking question that Why only Sindh? Why no settlement of outsiders in other parts of Pakistan?, he replied, “Answer is Simple. Pakistani establishment knows very well that threat to “Pakistani nation” identity is only from Sindhi nation because of Sindh’s secular values and historical identity they want to convert us in minority. So in future, we will not be able to claim for our national freedom of Sindhudesh”.

Zafar Sahito said, “Afghan, Bangali, Burmese and others are settling in Sindh. Outsiders are being issued CNICs instead of being expelled”. He said further, “Outsiders are snatching our rights. Due to these outsiders settlements demography of Sindh is drastically changed over years”.

He said further that outsiders were being settled in Sindh through a conspiracy to convert Sindhis into a minority while feudal rulers of Sindh destroying old villages and historical places, forcing poor people to leave their ancestral homes and handing over these thousands of acres to Bahria Town, DHA, Zulfiqarabad and other builders to save their corrupt skin from Pakistani generals and establishment”.

“Pakistan is playing cleverly, receiving millions of dollars every year from UN and other donors in name of refugees and by settling them in Sindh destroying future of indigenous Sindhi people of Sindh.”

In last, Zafar Sahito demanded that the United Nation and world’s civilized countries stop giving funding to Pakistani government, so that Pakistani establishment can be confronted and stopped from bringing more outsiders in Sindh to avoid further damage to secular culture of Sindh by changing demography of Sindh. He also demanded that these outsiders must be immediately expelled from the occupied Sindh and also others must be stopped from entering Into our motherland.

Besides the Sindhis, there are large number of Mohajirs also living in Sindh. During the partition of India and Pakistan in 1947, Muslims from Indian states of Uttar Pradesh and Bihar migrated and settled in Karachi, Sindh. They were all Urdu speaking. However soon after, Punjabis took over the control in Pakistan. Pakistan tried to bring a demographic change by settling Punjabis in Sindh, particularly in Karachi. Now refugees from different region that are being settled in Sindh are Radical Islamists and would not want Sindhis or Mohajirs to Prosper. No reservations in Jobs are provided to Mohajirs despite after 73 years of its formation.

When Pakistan cannot tolerate secularism in Sindh, what right Pakistan has to interfere in internal affairs of India? Shouldn’t India instead advocate for Freedom of Sindhudesh and freedom of Balochistan from the illegal occupation by Pakistan on all International forums?

Shouldn’t International community come forward and tell Pakistan that “Sindh Is Not An Orphanage”?

Will International community give recognition to governments of Free Sindhudesh and Free Balochistan in Exile if these nations choose to do so?