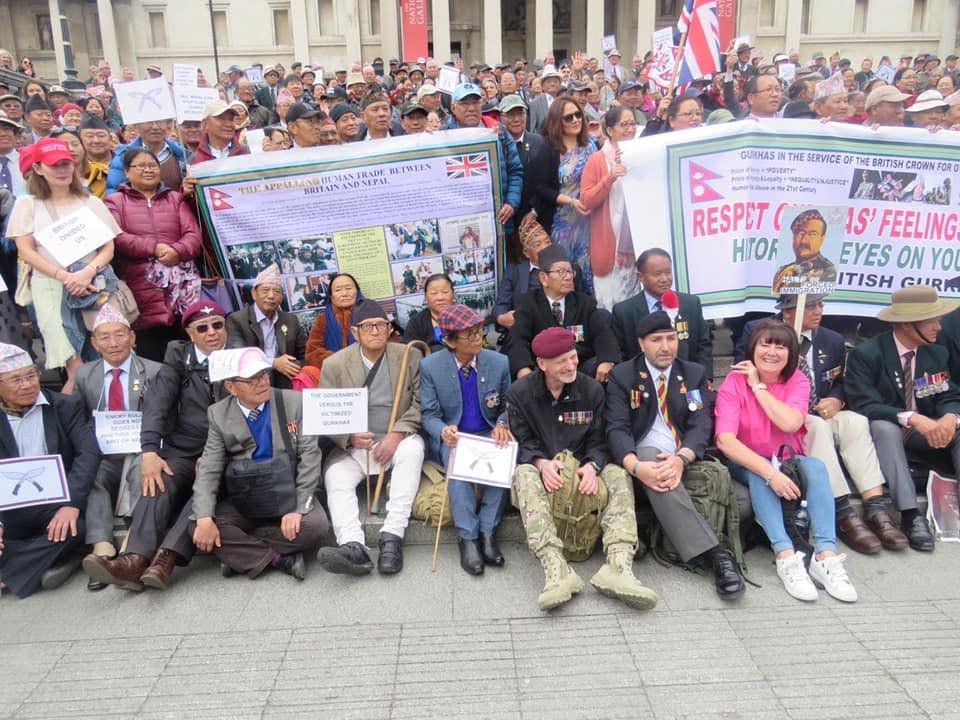 Former British Gurkha Veterans are sitting on relay hunger strike in London on demands for compensation and pension parity.

UK government had failed to give heed to their genuine demands of parity in the pension and other perks and facilities with their British counterparts, ex-Gurkhas have resorted to launching a relay hunger strike in the United Kingdom to put pressure to address their demands. The British Gurkha Satyagraha United Struggle Committee started a relay hunger strike before the office of the British Prime Minister at 10 Downing Street from 1 pm on Wednesday 21-July 2021 (local time).

Campaigner Gyan Raj Rai shared that they were forced to stage a hunger strike when their demands were not heeded despite several attempts from their end.

Rai further informed that the relay hunger strike would continue for 13 consecutive days since Wednesday 21-July 2021. The hunger strike will be undertaken on a rotation basis with one campaigner in the strike each day, he further clarified.

It is said that the police moved Former British Gurkha Veterans protesting from The place they were resting at 2am to the pen opposite Downing Street under the threat of arrest if they went to sleep. It was told by police that as some of them fell asleep overnight. [if you are using the demo pen you are not allowed to sleep there so they were told to remove all seating and this meant they would have to sit on the floor.]

Thereafter there was call over the social media to donate used wheelchairs to the Former British Gurkha Veterans sitting on the relay hunger strike as Police cannot remove them from the wheelchairs.

One social media post read, “Call out Folding wheel chairs – Anybody have a unused folding wheel chair plz take it to the Gurkha on Hunger strike in London the police can’t remove these from you I’m not asking anybody to buy them only if you have one not being used The Gurkha needs them.”

As per a post yesterday on Face Book by Stanley Kaye, “I am at the pen with Dhan Gurung and no POLICE have been here to ask them to leave infact they came and saw them and asked if they were OK they have seats to sit on so we have no problems at this present time.” Hence it seems like for the time being the veterans have been allowed to sit on Chairs/ wheelchairs.

When Tikendra Dewan enlisted in the famed Gurkha brigade of the British army in the early 1970s, he was not thinking much about the future, let alone a comfortable retirement. Like many Nepalis who signed up to defend colonial Hong Kong, Dewan was drawn by the promise of adventure and the chance to see the world. But after devoting more than three decades of his life in service of queen and country, the 66-year-old veteran feels betrayed.

After Hong Kong was returned to Chinese rule in 1997, its Gurkha brigade moved to Britain. Dewan left the service in 2002. He gets a monthly pension of about £900 (US$1,100) – half the amount received by native British soldiers who retired around the same time.

“We didn’t know anything about the terms and conditions of pay,” said Dewan, who now lives in Farnborough, about 65km southwest of London. “When you are young, you don’t bother about these things.”

In May 2009 Gurkha veterans won the right to settle in Britain after a long campaign encouraged by Joanna Lumley and other supporters.

Around 36,000 members of the regiment who retired before 1997 were now allowed to live in Britain with their spouses and children if they chose to do so. Prior to 2009, only Gurkhas retired since 1997 had the right to remain in the UK.

Coordinator of the BGSUSC UK-Nepal L B Ghising they will also seek assistance of the international lawyers and file a case in the international organizations besides the hunger strike, if both governments (Govt. of UK and Nepal) chose to ignore their demands.

Ghising said that British government meted out great injustice to Gurkha veterans, especially on the pension issue for those who joined before September 30, 1993. “There is an urgent and dire need to address the issues on both the Gurkha Pension Scheme (GPS) & the Armed Forces Pension Scheme 1975 (AFPS75). We welcome the British Government’s change in the Terms and Conditions of Service (TACOS) for all Gurkhas who joined after 1st October 1993,” read a press release distributed during a press conference organized on Monday 5-April 2021.

As per the Tripartite Agreement (TPA) of November 9, 1947, it was mentioned that the Gurkha soldiers would be an integral part of the parent army and that they would be treated equally to their British counterparts. “The whole world is aware that the Gurkhas have been discriminated with regards to their pay, perks, pensions and other benefits ever since they joined the army,” said Ghising.

The allied organizations of various Gurkha Associations “British Gurkha United Struggle Committee ” have been struggling to exert pressure on both the government for the last 3 decades. They also organized 13-day long fast unto death strike in 2013, after which the Joint Technical Report was submitted on March 22, 2018. Along with these, the government of Nepal had also sent a requisition letter for a dialogue to the British government on February 12, 2020.

Coordinator Ghising complained that the UK government had failed to take it into account and initiate further steps to cover the request of Nepal. “Such discriminations are very disgraceful and inhuman to the Gurkha soldiers who fought on the front line for the interest of Britain by sacrificing their lives,” he added.

Struggle Committee’s member Krishna Bahadur Rai warned to launch fast-unto-death if the British Government did not make any effort to initiate dialogue within 13 days.

It may be noted that several organizations concerning the demands of Gurkhas, including NRNA-UK, had sent a letter in writing to both UK and Nepal governments last month calling for their efforts to address the issue.

The letter was dispatched urging the governments to initiate dialogue on the demands of ex-Gurkhas, including pension.

However, the GAESO has not lent its support to the agitation launched by the Gurkhas struggle committee putting forth 12-charter demands.

Earlier the committee had postponed its hunger strike scheduled to be staged in London until July 21.

In a statement, the committee had said that the decision was taken following an assurance from the Nepal government mentioning that it will take a firm step to start a direct table talk with the British government within two weeks to resolve the outstanding Gurkha issues.

Gurkha veterans have been protesting putting forth different demands including an equal pension on a par with their British counterparts. Earlier on June 16, a protest rally was staged in London to press the British government to address demands.

The committee had appealed to the British people to encourage their government to take the Gurkha issues extremely seriously and hold a government-to-government meeting immediately.

Earlier, the British Ministry of Defense had said that the Nepal government can communicate with the British government to address the grievances of Gurkha veterans.

The UK Ambassador in Nepal is in contact with the Minister of Foreign Affairs on a regular basis and should the Nepal government wish to communicate on the matter of Gurkha veteran grievances, they may do so, the Ministry had said in a formal response to a joint letter sent by six Gurkha organizations.

A Face book user Paul Farrell commented, “Should’ve come across the channel in a rubber dinghy and have every need catered to. Utmost respect to these amazing Gurkhas but none whatsoever to this or previous governments.”

Another Face Book user Enoch Powell commented, “British government have money for illegals daily. Yet the bravest of the brave the Gurkhas what do they get? Told to sit on the floor by the Met Police DESPICABLE. HUGE RESPECT”

Another Face Book user Don Castelow commented, “Enoch Powell 100% agreed, we they just gave France 50 million or so. Why don’t we pay and use the retired Gurkhas as our border force. They would keep the economic migrants out.”

Another comment by Tracey Martin on Facebook, “I’m furious about this! This bloody (excuse my language) government is shameless. These honourable men have fought for this country, died for this country and what do they do? They treat them like rubbish. I bet the police hated doing that particular job. We need more media coverage, there must be some brave journalists and tv producers who will not cow down to media blackout!”

Another comment by Cheryl Brighton on Facebook, “Let’s see the police, when they fall asleep in the commons… make them sit on the floor.. This government should be totally ashamed of how we are treating the brave Gurkhas…”

As mentioned by some of the social media users, shouldn’t the British Government employ some of the Ex-Gurkha veterans and deploy them to stop illegal migrations and play an effective role in neighborhood watch in preventing the rape of young girls 8-12 years old by Pakistani Muslim Grooming Gangs in UK?

Will the settlement of all dues of Ex-Gurkha Veterans more than what UK is currently spending on its failed security apparatus?

Government of UK has invited VISAs from Hong Kong residents for UK citizenship. What about giving equal rights first to Ex-Gurkha veterans who laid their lives for generations to serve the British Crown?

6 Pakistani men were sentenced for the murder of English 20-year-old, Bradley Gledhill on the streets of Batley in West Yorkshire, UK