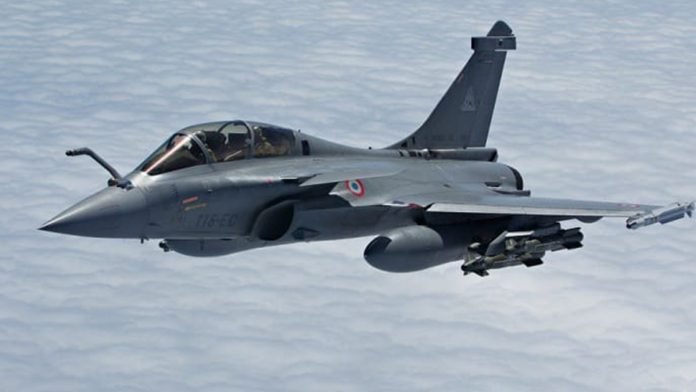 Prime Minister Narendra Modi welcomed the Golden Arrows with IAF motto in Sanskrit, which translates to – there is no bigger worship, good deed, or duty than the protection of the nation. ‘Glory that touches the sky’.

A formal induction ceremony, will be held around mid-August for induction into the Indian Air Force as part of its No 17 Squadron, also known as the “Golden Arrows”. The Induction ceremony is expected to be attended by Indian Defence Minister Rajnath Singh and top military brass of the country.

The fighter jet is much more capable than any aircraft in Pakistan’s inventory including F-16 aircraft or J-series of Chinese Junk Fighter Jets that have yet to see combat. The Rafale’s acquisition is a significant boost for India’s defences against Pakistan.

It should be noted that as per terms of purchase of F-16 Fighter Jets, Pakistan cannot use F-16s against India in any event. As per the contract of sale, F-16s can only be used in the war against terror. In the event Pakistan attempts to use F-16s, US can ground all F-16s on a breach of contract for sale. Hence the remaining leftover in the Pakistan inventory are aging Miraj and Chinese J-Series fighter Jets. Pakistan that is already bankrupt, will have to consider what else besides selling the brides and donkeys to pay off the Chinese debts.

Rafale are combat-proven having been inducted into conflicts in Afghanistan, Mali, Libya, Iraq and Syria.

In between all these, talks of additional 36 Rafale fighters have been doing the rounds for long in the defence corridors.

The Rafale will also have 13 Indian specific enhancements, all of which will be integrated once the full delivery is done by 2022. These enhancements include Israeli helmet-mounted display, ability to start in very cold and high altitude areas like Leh, among others.

With a range of 3,700 km, Rafale comes with its 10-tonne empty weight. It is fitted with 14 hard points. Five of these hard points are capable of drop tanks and heavy ordnance. Total external load capacity is 9.5 tonnes, which means that the Rafale can lift the equivalent of its own empty weight in payloads.

“Buddy-buddy” refuelling missions can be carried out in portions of the airspace out of reach of dedicated and vulnerable tanker aircraft.

The maximum take off weight is 24.5 tonnes and the fighter can carry 4.7 tonnes of internal fuel and up to 6.6 tonnes external.

With a maximum speed of nearly twice the speed of sound, the landing ground run is 450 metres without drag-chute.

Weapons on board the Rafale : Real game-changers

The biggest force-enabler for the IAF is the weapon-carrying capability of the Rafale, which can be tuned for delivering nuclear weapons too.

The game-changing missile on-board the Rafale is the over Rs 20-crore worth Meteor air-to-air missile.

Manufactured by European firm MBDA, the Meteor is a long-range rocket and ram-jet powered, and its integration into the Rafale weapon system brings about a paradigm shift in air-to-air affairs since it has a range of over 150 km with a zero escape kill distance of 120 km.

It means an Indian Rafale jet will be able to shoot down an enemy aircraft, even if over 100 km away, without even crossing the Indian air space.

With its avionics, radars and weapon systems, the Rafale is the most potent aircraft in South Asia, much ahead of the F-16s that Pakistan uses or even the JF-20, the 5th generation stealth aircraft of China, which is yet to see combat.

Neither Pakistan nor China possess a weapon as deadly as the Meteor.

Another key missile on-board the Rafale is the over Rs 40-crore worth Scalp long-range air-to-ground stand-off cruise missile.

Weighing 1,300 kg, the 5.1 metre-long Scalp can be carried in either one missile or two missiles configuration on the Rafale.

The missile has a 600-km range and is known for its precision. The Rafale will not have to cross the Indian airspace to hit a target that is about 600 km in enemy territory.

It is a strategic weapon that can be used in penetration, impact or airburst modes, and can even strike deep even in anti-access and area-denial scenarios.

In a bid to deploy the new Rafale aircraft quickly amid tensions with China, the IAF has opted for the French HAMMER air-to-ground precision-guided weapon system under emergency procurement.

HAMMER, which stands for Highly Agile and Manoeuvrable Munition Extended Range, costing nearly Rs one crore, consists of a guidance kit and a range extension kit fitted on standard bombs of different makes.

The original plan was to equip the Rafale with Spice 2000 kits, which have already been integrated into the other French aircraft in the IAF inventory — the Mirage 2000.

The Spice 2000 needs to be integrated into the Rafale aircraft. Keeping the cost of Spice, integration and testing in mind along with the time that the whole process will take, the IAF went in for the HAMMER.

The Rafale will also be equipped with the Mica air-to-air missiles. The IAF plans to further integrate the BrahMos NG missiles with the Rafale when it is finally made by the Indo-Russian joint venture.

The Indian Rafale comes with an Israeli Litening pod for sensor commonality across platforms in the Indian inventory and not the Thales TALIOS laser designator pod that France uses.

The Rafale comes with RBE2 Active Electronically Scanned Radar, which when compared to radars with conventional antennas, gives unprecedented levels of situational awareness with earlier detection and tracking of multiple targets.

Rafale also has the ‘Front Sector Optronics’ (FSO) system, which is immune to radar jamming while operating in the optronic wavelengths.

The system incorporates radar, laser and missile warning receivers for threat detection plus a phased array radar jammer and a decoy dispenser for threat countering, according to the MBDA, which had developed the system with defence contractor Thales.

Pilots are being trained on the Rafale are already experienced pilots familiar with everything from India’s ROE to weapons tactics. The fact that Indian Rafale pilots were/are trained by experienced French Rafale pilots significantly accelerated the learning curve with Indian pilots being briefed on the Rafale’s strengths and weaknesses, combat effectiveness and tactics that perhaps took French pilots years to identify and master.

In our previous article India Unleashed: Pakistan Degrades To A Nuisance, China Is The New Equal we discussed in details how Pakistan has degraded to a Nuisance and China is the new Equal in the changed Geo-Political scenario in Asia. And with Pakistan becoming a non-entity, it’s a matter of time the stakes are to be upped as what we are seeing today – India being hyphenated against China. All the credit goes to the strong Indian Prime Minister Narendra Modi.

However Pakistan in its wet dreams still dreams that India’s Defence and strategic decisions are guided by the acts of Pakistan. In reality as we discussed, Pakistan is a non-entity and its ranting against India’s achievements has no takers in the entire world. Whole world knows about the Chinese Imperialism and aggression against all the countries around it. We covered this in details in our previous article It’s NOT just INDIA, China has Border Disputes with 18 Countries!

Responding to the development in the neighbour country, the Foreign Office (FO) of Pakistan called on the international community to “dissuade India from its disproportionate arms buildup which could also lead to an arms race in South Asia” forgetting that Pakistan is worth just a nuisance in India’s Defence Strategy and India has to match its defence preparedness against China.

Terrorist nation Pakistan, peeing in its pants is afraid that Rafale can be used to deliver nuclear weapons. Pakistan Foreign Office (FO) Spokesperson Aisha Farooqui during her weekly press briefing said that “according to some former senior Indian officials and several international publications […] Rafale jets are dual-capable systems that can also be modified as nuclear weapon delivery platforms”.

The FO statement noticed that it is well-established that India continues to expand and modernise its nuclear arsenal both in terms of type and number of delivery systems. “Besides, India has nuclearised the Indian Ocean and continues to increase the readiness of its arsenal through measures such as canisterisation of missile systems.”

Thinking Pakistan of having some nuisance value and ignoring the arms buildup by China, Pakistan Foreign Office (FO) Spokesperson Aisha Farooqui “It is disturbing to note that India continues to amass military capabilities beyond its genuine security requirement. According to credible and reputable international research institutes, India is now the second-largest arms importer in the world,” added Farooqui.

According to the Pakistan Foreign Office (FO) Spokesperson Aisha Farooqui, this arms buildup is being aided and abetted through a policy of exemptions, waivers and supply of advanced equipment, technology and weapons for narrow commercial interests.

“Such arms transfers also violate the objectives of various export control regimes on preventing destabilising accumulations of arms in various regions including where there exist outstanding conflicts and disputes.”

Thus the usual ranting of Pakistan will go on, which is irrelevant. With whole world standing against the aggression of China such wolf crying has no takers.

Scalp long-range air-to-ground stand-off cruise missile that has a 600-km range, the Rafale will not have to cross the Indian airspace to hit a target that is about 600 km in enemy territory. This 600 KM range covers virtually every city in Pakistan. Every strategic asset of Pakistan is within the strike range of India.

Indian Rafale jet will be able to shoot down any Pakistani aircraft, even if over 100 km away, without even crossing the Indian air space.

Does bankrupt Pakistan has funds even to think of attacking India in a 2 front war? What if Pakistan attacks India during a conflict with China and India Retaliates? Will it not lead to total economic collapse and destruction of Pakistan including division of Pakistan into 4 parts? Will it not be a time when Balochistan, Sindhudesh, Pashtunistan, Sairaiki get their independence from Pakistan?

It is time Pakitsan understand its irrelevance in changed Geo-Political scenario in Asia.