Sharia for America : Not An Impossible Proposition, Unless Patriots Do Something About It Now 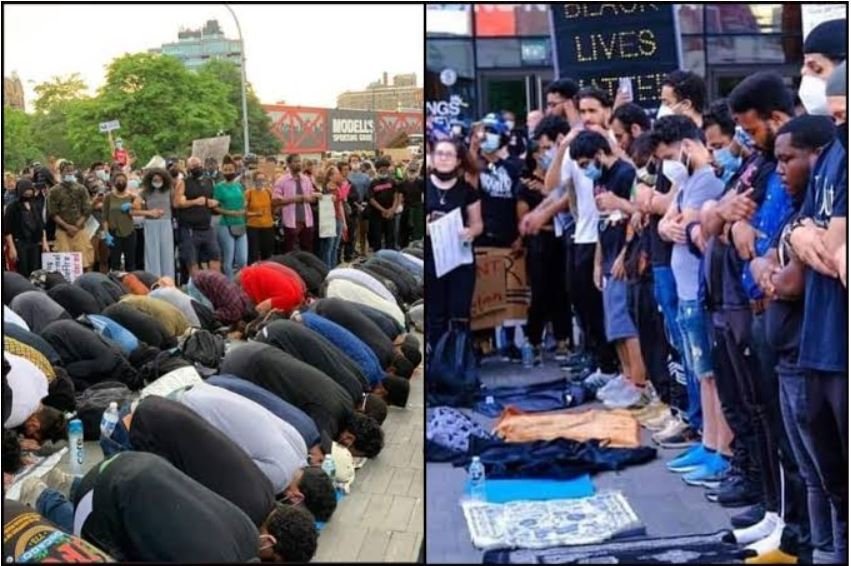 The way politics in the US is heading, it seems Sharia For America is not an Impossible Proposition, unless US Patriots do something about it.

There was a tweet yesterday which struck a raw note – how exactly a paid promotion of some foreign event by some interested individuals hurt the sentiments of America?

Reading closely, one would see that the reason given is even more sinister –

Many also wrote a letter to the Mayor stating, “We write to bring to your attention an Islamophobic billboard set to be projected in Times Square in order to dehumanize Muslim New Yorkers and celebrate human rights abuses against Muslims in India. Our coalition stands opposed to the far-right Hindutva nationalism of the BJP government in India.”

Related Article : Jihadists Sympathizers Including the Democrats in US are Opposing Relief to Victims of Islamic Jihad

It is hilarious to argue that a religion (Hindus) constituting 0.5% of American population hurts the sensibilities of an average American – in fact, the mobs who rioted in the name of Black Lives Matter contained more members than the total number of Hindus in USA. The real question one would like to ask is, if Christians demanding restoration of Hagia Sophia and Muslims demanding Cordoba is correct, how is India demanding a temple at Ayodhya in Indian State of Uttar Pradesh is wrong? This is on top of the fact that Cordoba was actually a Church which the Muslims converted to a mosque during their subjugation of Spain.

Related Article : Turkish Hypocrisy: Do To Hagia Sophia, What They Complain To The World

The agenda gets more sinister when it is revealed that rather than the planned reconsecration of a temple in India, it is now revealed that a campaign is run over the issue of Kashmir based on the narrative Pakistan likes the world to listen – a narrative which is completely against the strategic interests of America. Ironically, this comes on the day Pakistan actually dropped it’s pretense of Kashmir for Kashmiris and made Jammu and Kashmir a province of Pakistan further highlighting the fakeness of the campaign.

On top of this, there is another news of a certain individual posting messages that he has received American Citizenship – in New York.

Aatish Taseer, an out-of-wedlock child between a Pakistani Minister(who was later assassinated for not being Islamic enough) and an Indian Journalist received OCI Card, a card issued by India for Persons of Indian Origin under the assumption that none of his parents are from Pakistan. When Indian Government was made aware of the fraud, the OCI Card he got is terminated. The question then is, did he really notify to the American Government if he submitted fake documents to Indian Government and his privileged status as an overseas Indian is rejected?

It’s not as if New York and America’s march towards Sharia and invitation to troubled individuals is not a new thing. It’s alleged that Senator Ilhan Omar declared her brother as her spouse for getting American Citizenship. And her stand over Islamic Terrorism is well known with those iconic words “Some People Did Something”

Even Sharia Police is not uncommon.

MCP&S now describes itself as a law enforcement organization, claiming its goal is to “protect members of the local community from escalating quality-of-life nuisance crimes….They are bullying people and getting out of their patrol cars looking like gangsters,” said one informer. “The people in Bed-Stuy don’t want them there.”

The MCP cars are nearly identical to NYPD patrol cars, with both having Ford Taurus models and both sharing similar decal schemes, colors and emblems…“A lot of people can’t tell them apart,” said the informer. “In fact, most people think they are NYPD detective cars, especially if they are driving behind you.”

The cars also have sirens, which another informer says is being used to intimidate people…They turn on their sirens when they see non-Muslims park next to a mosque during Friday prayer services,” said the second informer…They get out of their cars and start humiliating these people, telling them they have to move their cars and that they can’t park next to a mosque because they’re not a Muslim, even though it’s completely legal for them to park there,” he said.

The real question is, is this being surreptitiously promoted by interested parties in America? Why are we seeing cases like incidence of undesirables getting citizenship in America and only Christianity getting attacked in the BLM Protests?

It is no coincidence that these Islamo-Democratic bastions turned out to be hardest Chinese Corona Virus COVID hit states, with the fortresses of Ilhan Omar and Bill de Blasio’s territories turning out to be the most impacted.

On January 27, 2017, Donald Trump’s Administration launched an un-American attack on Muslims and refugees with the hateful goal of closing our nation off to immigrants who are often fleeing the worst conflict zones in the world, simply because of their faith. The Trump Administration’s anti-Muslim bias hurts our economy and betrays our values. Prohibiting Muslims from entering the country is morally wrong, and there is no intelligence or evidence that suggests it makes our nation more secure.

All of this begs one to question, what does the Islamo-Democrat Lobby has in store for American future. If Atish Taseer, the Sharia Police, projection of Pakistani point of view which is at cross-roads with American plans for global dominance in an era when America is actually searching for allies, open support for anarchy in the name of Black Lives Matter and incompetence in governance during COVID is any indication, America is going to be staring at some serious trouble if such views are allowed to become mainstream.

Why Radical Islamist Groups have no tolerance for Hinduism and other minority religions in the US, while they openly preach Invasion of the US and Europe?

Why Democrats and Leftist Liberals in the USA are guided by Pakistan and are doing everything that is against the Indian Interests? Do the Democrats get more kickbacks and donations from Pakistan Intelligence Agency?