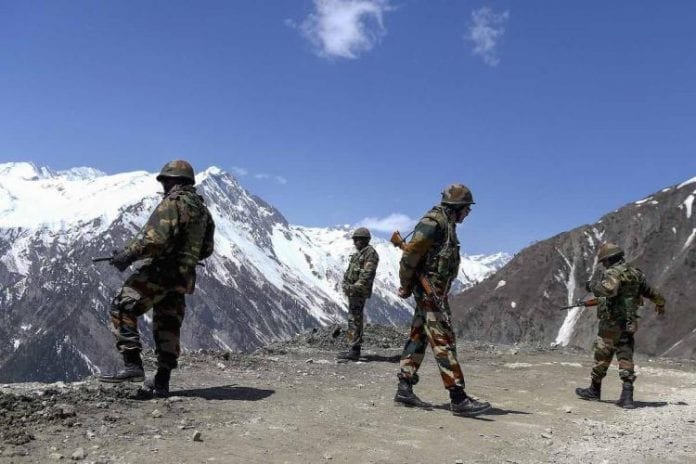 Rudderless China is shocked as India made “Readjustments” on Line of Actual Control (LAC). Indian Army thwarted the Chinese PLA’s attempt to capture the important peaks in Indian Territory after an intense face-off on the night of August 28-29 there and occupied the dormant height within its territory. The Indian Army also removed the cameras and surveillance system of the PLA after taking the hill tops into its control. The Chinese Army has installed such equipment all along the Line of Actual Control (LAC) and use them effectively to monitor Indian activities and respond quickly whenever they find Indian patrols on the Indian areas occupied by China.

Indian Army was holding its positions. However this was a big shock for Communist Chinese PLA which thought it was a cake walk to capture those posts and were outsmarted and pre-empted by Indian Army to capture those forward posts before Chinese Army could reach there.

Nitin Gokhle, renowned Indian national security analyst posted a series of tweets describing the current situation. “Some updates on LAC situation: Its a battle of heights now in Ladakh. Having outrun the Chinese in the race to the top on 30 Aug except Black Top and Helmet heights (Gurung Hill, Magar Hills, Rezang La and Richen La under Indian control), India has consolidated defences there.”

“After the first phase deployment by infantry units at dawn on 30th Aug India managed to drive up tanks at Richin La in broad daylight that Sunday evening surprising the Chinese even more. Since then full consolidation has happened on those heights.”

“Since then India has strengthened defences not just on South Bank of Pangong Tso but also on the North Bank. Indian troops now occupy highest points at Finger 4, stationing themselves above the Chinese presence on the lower heights of the ridge line.”

“PLA is now trying to come closer to the Indian positions on Finger 4 which are at a higher elevation. All the PLA deployments on the north shores of the lake are dominated by India’s latest move. In effect, the Indian Army has outsmarted the PLA on both sides of Pangong Tso.”

“After firing incident on 7th evening, reservations about not using firearms along the LAC have been removed which means situation is most volatile than ever before. Not only are tanks ranged against each other (especially in the Spanggur area), tense troops are facing off here.”

“So what next? India thinks the Chinese will attempt a quid pro quo (occupying unheld areas) in some other sectors to provoke an Indian response. The question is: when will it happen? One educated guess is, anytime before 15 November, when winter will begin in the Ladakh Mountains.”

“India is of course prepared although another assessment is China wants to win without fighting. One more assessment says PLA doesn’t have the stomach to accept losses or prepared to sit at the forbidding heights through the harsh winters.”

The reaction of PLA/CCP military leadership by summoning Commander of the area to Beijing & subsequent change of Commander reflects poor/rudderless leadership and their nefarious unethical designs.

Multiple ‘readjustments’ and strengthening of Aug 29-30 ‘readjustments’ in Pangong north bank & Sub-Sector Chushul (south bank) in last few days by Indian Army at Line of Actual Control (LAC) has not only strenthened Indian Possition at certain places, is has come as a big shock for Communist Chinese PLA. Indian Army troops had climbed to the entire ridgeline from South Bank of Pangong Tso to Richin La. Mukhpari is North of Rezang La on 29-30 Aug. Spotters on the heights can call down artillery fire on every PLA tent in sight once the gloves come off. Though Chinese PLA tried to intrude and take Indian Posts, they fired warning shots. Indian Army also fired warning shots in air in response. That made Chinese single kid princelets to retreat.

After the Galwan incident India has decided not to take any chances or trust the Chinese who keep engaging in talks but show aggression on ground. On 30th August too after occupying the ridge line, India had told the Chinese that they will be fired at if troops tried to come up.

In 1962 Chinese Invasion, the Invading Communist Chinese PLA used it’s artillery superiority to devastating effect. However, this time the stakes on the peaks are high on both sides. India is not the same India of 1962 and Indian Army is not the same Indian Army of 1962, Indian Political Leadership is not the same as that of 1962. A lot has changed. Indian Army has already given a taste of bloody nose to Chinese PLA during the face-off when 20 Indian Soldiers martyred and over 100 PLA kids were killed in an unfair combat where Chinese were armed with nail studded rods attacked unarmed Indian Soldiers. We covered it in our previous article Chinese Aggression at Indian Border Fails – Situation Still Tense.

Exactly why China will try to retake positions before the snows start to fall? The princelings of the PLA have never spent a winter in tents, exposed at 14000+ft facing blizzards & -40°C temperatures. China cannot sustain winters in a location which is 262 km from nearest inhibited town.

Access to G219 highway need 50 KM travel of mountainous road. There is no way Chinese CCP PLA thugs can survive even for 2 days.

Only supply line China has to Spanggur lake is X708 which is under direct line of fire from India once India created its post over Reqin La hill.

X708 route which is the only connecting road from Spanggur Tso to G219 Highway, is actually 159 KM, does not have Gas station on entire 159 KM stretch of mountain road. CCP simply cannot sustain in this area for long. All that India needs to do is to time the CCP out.

Chinese PLA was practicing sending supplies through drones which at such heights and extreme winters will not work.

Walking 10 meters on those heights is almost impossible, normal people who visit Leh which is at much lower altitude need 48 hrs just to prevent bleeding. India has huge advantage of height. Tibet is on other side of Himalya. India always has high grounds.

This CCP propaganda video proves how difficult it is for CCP to feed its troops in in-hospitable region. come winter, CCP won’t survive for longer duration.

As per some experts, that’s why China has panicked once India took over this strategic point. It’s all over for China in aksai chin. He further said, if war does not start by October-November 2020, China will surrender Indian territories of Aksai Chin (that China invaded in 1962 war and has been holding it since then) without a fight. They would want to inflict some damage while they can. Hence, probability of war in November 2020, time frame is very likely. In case Chinese try to invade more Indian Territories, that will be considered as an Act of War imposed on India. In such a situation, India’s goal will be not only to push back the invading Chinese forces, but to regain the lost territories of Aksai Chin in 1962 war. November 2020 to January 2021 will be the crucial period to monitor.

He further said, G219 will be rendered useless once access to X708 is gone. Therefore DBO region will also be free from Chinese incursion. Supplying to PLA forces stationed in that region using East Turkistan region is another nightmare, as the region is already disturbed and China does not have any logistics support system there. The total population of Rutog County is 6500 and you field 50k troops there. You can’t even live off the land.

What are the different possible areas where China can attack India?

1. Aksai Chin – China has no resources for winter conflict.

4. Uttarakhand – India holds all the major passes except Tinker.

5. North Sikkim – Shigatse is in line of fire.

6. Chicken’s Neck – In case China attempts to attack India, Chumbi Valley will be taken by India

7. Arunachal – It has been China’s graveyard. India will use all available firepower in its capacity to again make it Chinese Graveyard.

India has actually paralyzed China by capturing reqin la and other hills, not a single bullet was fired for this victory.

The IndianArmy has done it every year while guarding Siachin Glacier.

CCP has already lost Aksai Chin with the presence of Indian Army on Reqin La, India has blocked their only supply line, use of drones has also failed, they know, come winters China will have to retreat and India will take back entire Aksai Chin. That’s why the frustration of loosing ‘South of Pongong Tso’ is driving ruddreless actions by CCP PLA’s single kids.

Well, this is because it seems to be the first time that Indian soldiers have actually done something like this on the LAC. So much so, that rudderless Chinese themselves didn’t know how to react to this event.