Did Open Society Soros and Microsoft by Bill Gates Fund The Council of Europe? 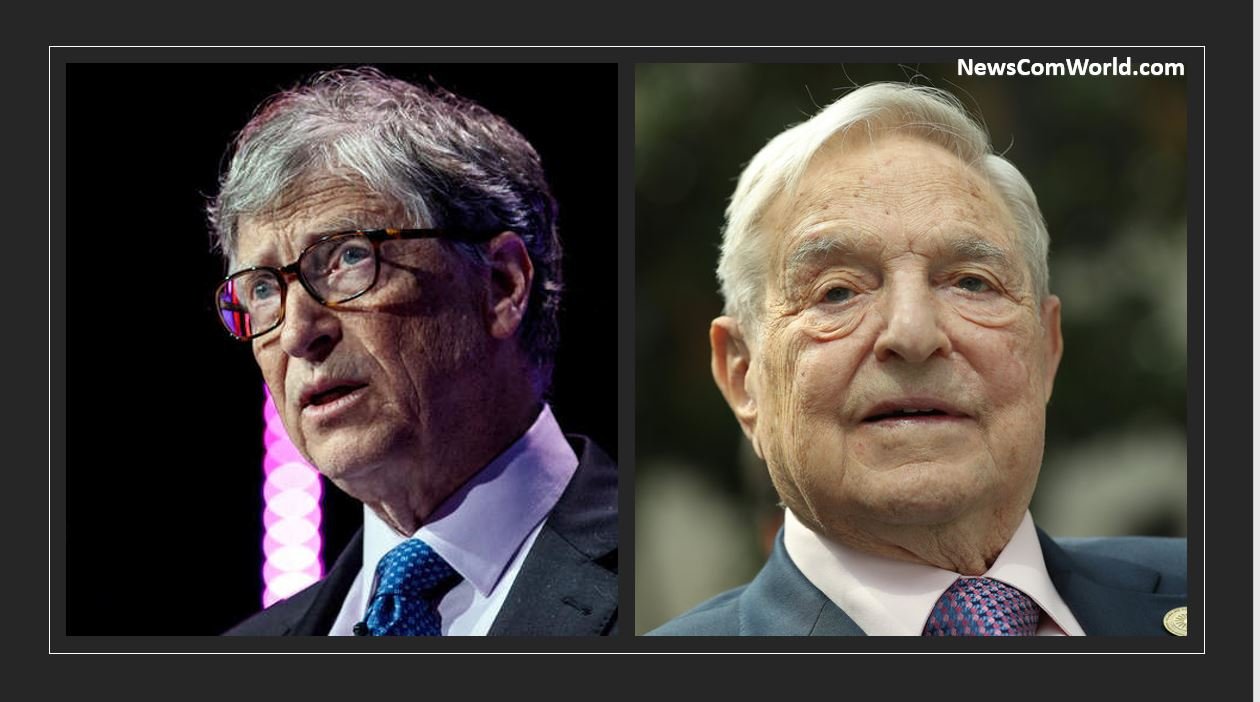 Did Open Society Soros and Microsoft by Bill Gates fund the Council of Europe? In an interview, Director of the European Center for Law and Justice, Doctor of Law Grégor Puppinck revealed about the George Soros scandal six months ago at the European Court of Human Rights (ECHR) and that now he denounces the role of the financier at the Council of Europe on which the ECHR depends because, as the magazine indicates, the latter “was itself funded by the Open Society and Microsoft”.

Grégor Puppinck explains “that on reading the Council of Europe’s annual financial reports, it appears that the Open Society of George Soros and Microsoft of Bill Gates are the two largest private donors of the organization” and that these two groups “gave respectively to the Council of Europe nearly 1,400,000 euros between 2004 and 2013 and nearly 690,000 euros between 2006 and 2014”.

We learn that “the Open Society also supports initiatives of the Council of Europe, notably the European Institute of Roma Arts and Culture” and that to hide this funding, “since 2015, there is no longer any trace of this direct funding”, but “that on the other hand, the Council of Europe established a special fund to receive such voluntary extra-budgetary contributions”.

The legal expert underlines the seriousness of the case because “it is astonishing that an intergovernmental political organization is thus permeable to private funding”. Still according to the lawyer, “a member of the Council of Europe seized the Committee of Ministers on this subject to ask the 48 ambassadors who compose it that all documents relating to this funding be made public”.

The WHO, the UN, the International Criminal Court, too. To the question of knowing whether we have here a questioning of the funding of international bodies by a few large NGOs and foundations, Grégor Puppinck replied “that it is true that the problem does not arise only for the Council of Europe, but also for the International Criminal Court which received $115,000 from the Open Society in 2017, and even more for the WHO and even for the UN ”. We even learn confirmation that “the Gates Foundation is the second WHO funder after the United States, with a payment of 530 million dollars in 2019”. This funding point shows the institution’s lack of autonomy because “80% of the WHO budget is based on voluntary contributions”, clearly showing that WHO will therefore be dependent on its finances in these decisions, Current values lets us know that this also affects governments: “That is to say on donations from foundations and governments”. The lawyer confirms that “this method of financing obviously calls into question the political independence of these organizations”. He adds by saying that “these large international organizations are prime targets for those who want to exercise global political influence, because they have considerable power, but financial resources below their ambitions” and that “these organizations are therefore vulnerable to threats. “Billionaire philanthropists” who seek to exert global political influence ”. Indeed, “this political influence can be exerted, as you will have noted, without any recourse to democratic mechanisms and controls”,

Large NGOs are forcing the doors. We are therefore witnessing the existence of a well-established system which allows large NGOs to join international organizations. The president of the European Center for Law and Justice says that “we are not only observing a phenomenon of entryism, but also of collusion which can be explained when we consider the financial power of these NGOs”, recalling that “the Open Society has been endowed with 32 billion dollars which it has donated and invested in human rights, media and politics since 1984 ”and that “the problem is not limited to Open Society” because “it also concerns other large private foundations, such as Gates, Ford or Oak”.

The lawyer uses “Gaétan Cliquennois’ recent book on the privatization of human rights (Cambridge, 2020) to argue. Moreover, by Current Values, How George Soros ‘Open Society and Bill Gates’ Microsoft Fund the Council of Europe‘, we learn that “the former Secretary General of the Council of Europe, Thorbjørn Jagland, spoke of George Soros as his “good friend”, while the Commissioner for Human Rights, Nils Muižnieks, was director of programs at the Open Society until he took office at the Council of Europe in 2012. In 2009, he explained that the Open Society wanted to create a new man – homo sorosensus [in reference to Soros] – the man of open society .”

The influence of this network is now illustrated in a public and debonair manner. Many leaders like to show their closeness to Soros father and son. This is the case, for example, of Jean-Claude Juncker, the former President of the European Commission or of Michelle Bachelet, United Nations High Commissioner for Human Rights since 2018, photographed upon taking office with George Soros. and his son.

To the question whether there was a follow-up to his report on the influence of Soros’ NGOs on the ECHR, Grégor Puppinck replied, “This report ( accessible here ), which has never been contested in substance, has had a huge impact in Europe and around the world; several governments and many politicians have taken it up. This is particularly the case of Russiaand Bulgaria. I have the feeling that public opinion is now informed and sensitized. This report proves that over the past ten years, of the 100 permanent judges in the Court, 22 have come from seven NGOs active in the same Court, and that 18 of them have sat in cases involving “Their” NGO, in violation of the elementary rules of judicial ethics. Among these seven NGOs, the Open Society network stands out for the number of judges linked to it (12) and for the fact that it funds the six other organizations mentioned in the report.”

He further said, “However, this report comes up against the embarrassed silence of the institution. The ECHR informed the newspaper Le Monde of its decision not to respond. Three Council of Europe deputies then referred the matter to the Committee of Ministers, targeting ”  the systemic problem of conflicts of interest between NGOs and judges of the Court”  and questioning it on the means to be implemented to ”  restore the ‘integrity of the European Court of Human Rights  ‘ . Unsurprisingly, the 48 ambassadors seem to be struggling to agree on an answer, because they have largely exceeded the three-month deadline set for this procedure. They have an obligation to respond in writing, if only to express their inability to respond.”

On a question about Brussels authorities he said, “The European Commission responded through the voice of one of its Vice-President, Věra Jourová: “The Commission has no doubts about the integrity and independence of the European Court of Human Rights. »  Move on, there is nothing to see! Except maybe a few photos that help us understand the context in which these responses occur. On one of them, we can see Commissioner Jourová with the Hungarian philanthropist declaring that “the values ​​of the Open society are at the heart of EU action”.

In another photo, European Commissioner Johannes Hahn – author of another response – also poses with George Soros, saying that“It is always good to meet George Soros to discuss our joint efforts to accelerate reforms and open societies in the Balkans and Eastern Europe”.

He further said, “George Soros and his lobbyists have benefited from no less than 64 interviews with Commissioners and senior officials of the European Commission; it is more, it seems, than what the European heads of state benefit from.”

He further remarks, “All of this fact should open our eyes to the enormous importance of these networks of influence and power above national political institutions. The ECLJ Report on NGOs and the ECHR threw a stone in the pond, it exposed and proved the reality of this collusion within the specific framework of the ECHR, but it is not enough. While any national court would have reacted firmly, to sanction the magistrates in question and correct the system, the European authorities are standing back and waiting for the people to think of something else. There is no desire to question. It’s scary.“

When a question was asked, “How do you explain this lack of questioning?“, Grégor Puppinck replied, “The links between international bodies and large NGOs and foundations are too deep and close; it is the same system of power: there is symbiosis between them, both financially and ideologically, and even human. But this relationship of complementarity is distorted and unbalanced by the intervention of billionaire philanthropists who pursue political, economic and financial objectives. The system is perverted by this “privatization of human rights”.”

When a question was asked if he has been the object of reprisals following his revelations about Soros’ hold at the ECHR?, Grégor Puppinck exposed the link between the George Soros Open Societies and their controlled media houses worldwide. He said, “we are now regularly the target of media attacks. The last, and most important, was orchestrated by the organization Open Democracy, a member of the Soros galaxy, with the support of abortion lobbies. This organization published a few weeks ago a pseudo-investigation against the ECLJ which was simultaneously relayed in around fifty newspapers around the world, including Time Magazine and EuroNews. Open democracy mobilized “Tracking the Backlash“, its own informal network of militant journalists created to “track the [conservative] reaction“. For them, it is a question of damaging the digital reputation of their political opponents. According to all these articles, the ECLJ would be a major threat, qualifying its jurists as “crusaders” and “secret army”, “infiltrated into our democratic institutions”, like “wolves disguised as lambs” . The words of this organization are obviously outrageous, as was its call last March for ”  the abolition of the family  “, but they all demonstrate the power of these networks. This type of attack confirms, if needed, the need to objectively expose the networks of power that constitute the new system of governance, both global and post-democratic.”

Can the Governments around the world that are threatened by the nexus of George Soros and Microsoft run Foundations that are undermining the Democracy in all the countries world wide and expose the sold out media houses in their respective countries?

Can all such NGOs affiliated to George Soros Open Society and others who are corrupting the Democratic Institutions can be banned in all the countries and their funds seized?

Can all the Protests around the world be investigated if the source of their funding are in any way connected to George Soros Open Society or other big “Philanthropists” who in name of Charity are trying to control all the democratic institutions?