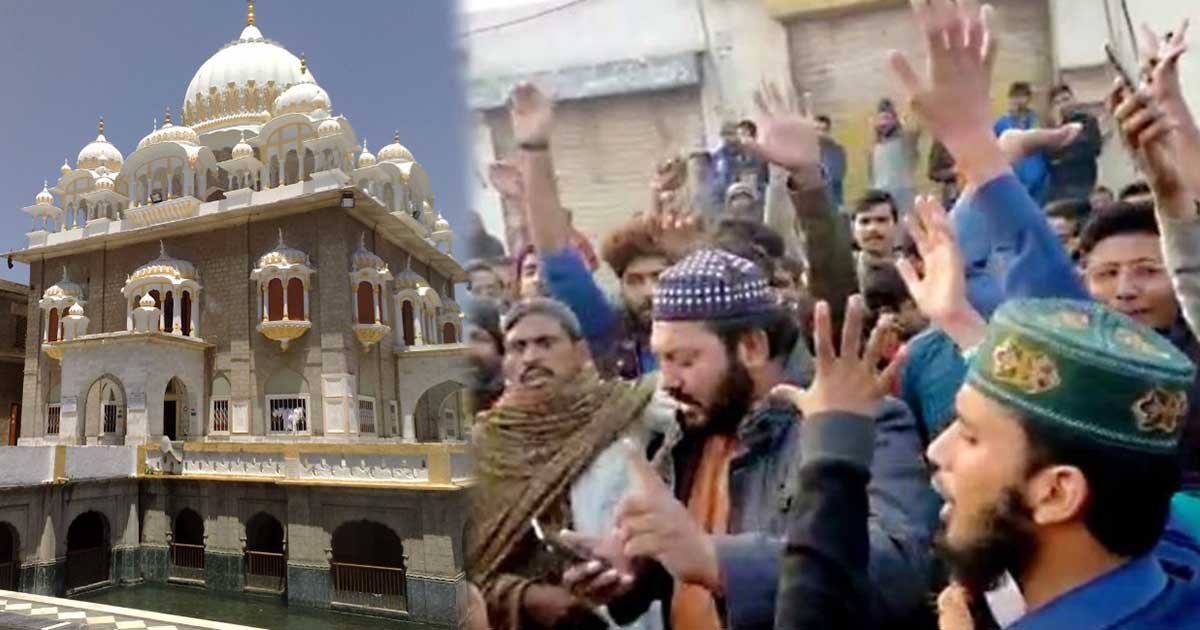 Gurdwara Nankana Sahib, also known as Gurdwara Janam Asthan, is a site near Lahore where the first Guru of Sikhs, Guru Nanak, was born.

It is not first time that persecution of Christian, Sikhs, Hindus, Ahmedi, Shias is happening in Pakistan. Forced conversions, vandalizing the reverend places, destroying deity sculptures, various forms of extortion, killing in name of blasphemy, everything is happening in theocratic Pakistani state under nose of government authorities, while intelligence agencies and law enforcement agencies support these goons and radical Islamist groups. Creating fear in minorities and let them live a deprived life or leave you everything behind and go to India is a common practice now.

A country harboring hundreds of thousands Jihadis but still member of United nations Human Rights Organization amuses me. Not only minorities but ethnic cleansing of historical nations Sindhi, Baloch and Pashtun is also now days common in Pakistan by violating all international laws of UN and crushing humanity.

Look at this report

The Human Rights Council of Pakistan has reported that cases of forced conversions are increasing. A 2014 report by the Movement for Solidarity and Peace (MSP) says about 1,000 women in Pakistan are forcibly abducted and converted to Islam every year includes Christian, Sikhs and Hindus.

Only this year 05 Sikh girls are abducted and converted to Islam, recently in January 2020, following the abduction and conversion of Sikh girl Jagjit Kaur. The mob was led by Mohammad Imran, the brother of Mohammad Hassan, the man that abducted the Sikh girl was forcibly married to. The attackers were angry with Jagjit’s brother Manmohan Singh for lodging a police complaint. The besieged Sikhs were threatened that they would be evicted. Check this again.

While the Sikh community was still awaiting the safe return of Nankana Sahib based Sikh girl Jagjit Kaur, another minor Sikh girl Resham Kaur has been abducted and converted to Islam in Jacobabad district of Sindh province in Pakistan.

Now again on celebrations of birthday event at Nankana Saheb. This incident happened with Sindhi Hindus pilgrims who went to Lahore Punjab Pakistan from Sindh were looted by thugs and local police goons to create fear. These pilgrims were threatened and beaten up by police instead of taking care of them. While the Islamist jihadi thugs were enjoying safe heaven protection like Hafeez saeed, the world famous wanted terrorist who is considered as an asset of Pakistan.

All this is happening in Pakistan with minorities. Facts and figures are in front of our eyes. I am surprised that how Sikhs community people are playing Pakistani “Khalistan” card? Everyone know about Kartarpur rahdari even and Pakistani agencies role in destabilizing peace in India? The same way they are every time playing Muslim nation card to manipulate Indian Muslim to go against their own motherland, Bharat.

My request to Sikh and Muslims living in India that Pakistan has nothing to do with Islam or Punjabi nation slogan (when they even don’t speak panjabi at home) they are just playing with you.

Previous Article by the same Author: Who is the Real enemy of Kashmiris? : By Zafar Sahito

Pakistan forcibly abducts and converts minor Sikh girls to Islam is now inciting Indian Sikhs. Will Indian Sikhs come forward and fight the Propaganda of Pakistani Fake Sikhs and the Khalistanis of Canada and UK?

Will Indian Hindus and Sikhs together fight the propaganda of Politicians and Political parties that are trying to create a divide between Hindus and Sikhs in India following Pakistan’s policy to “Bleed India With Thousand Cuts”?