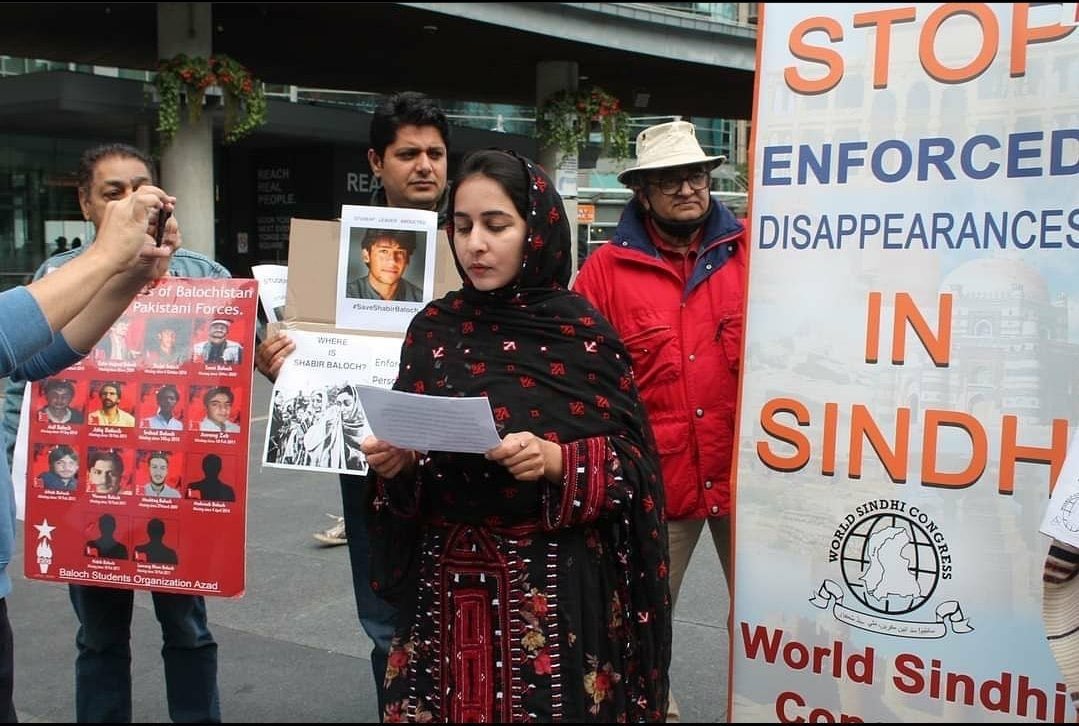 There has been a total Law and Order collapse in Canada as Justin Trudeau continues to shelter terrorists and rouge Pakistan Army and Intelligence Agency ISI operatives. Now renowned Human Rights Activist and former chairperson of Baloch Students Organization – Azad was kidnapped and murdered in Toronto, Canada.

Karima Baloch, a Canadian refugee named by the BBC as one of the world’s 100 most “inspirational and influential” women in 2016 was last seen on Sunday, December 20, 2020, at approximately 3 p.m.

The Toronto police had said that Karima was last seen in the Bay Street and Queens Quay West area in Toronto.

The Police had requested public’s assistance in locating Karima Baloch. However, now her family has confirmed that Karima Baloch’s body has been found and has requested privacy.

Karima Baloch, a famous personality in Balochistan, is believed to be the pioneer of women activism in Balochistan. She has also raised the issue of Balochistan in United Nations sessions in Switzerland. She was also very vocal against the Pakistan Army killing Baloch, Pashtun, Sindhi and Mohajir Freedom Fighters after the enforced disappearance and torture in Pakistan Intelligence Agency run torture cells for decades.

Here are some of the tweets from Human Rights Activist Karima Baloch who has constantly tried to expose Pakistan Army and Pakistan Intelligence Agency ISI abducting Baloch, Pashtun, Sindhi and Mohajir people and killing them.

Her sudden and unexplained disappearance and murder has raised serious concerns.

Justin Trudeau’s Canada has now openly decided to support the Khalistani terror apparatus who are working hands in hands with Pakistan Intelligence Agency ISI, trying to create discord inside India.

In fact, Canada’s love for Khalistani terrorism is not a new phenomenon. One of the most dastardly attacks in world history, Kanishka Bombing which killed 307 People was conducted by Canada based Khalistani Terrorists and when the British courts condemned the perpetrators to death, in an attempt not to hurt the sentiments of it’s Khalistani vote bank acquitted two of them and commuted to life sentence, the third.

Not only Canada, Pakistan Intelligence Agency is doing its dirty work in Europe and South Africa also.

Earlier Pakistan was using its Assets in UK. They were normally engaged in Grooming Gangs Activities and raping young girls of 8-12 years old. Besides that they carried out the dirty work of Pakistan Intelligence Agency ISI including giving threats or even assassinating the Freedom Fighters who spoke against the Human Rights Violations by Pakistan Army in Balochistan, Pashtunistan or Sindh. However as per recent reports, Pakistan Intelligence Agency ISI has adopted a new route to infiltrate its trained Assassins via the Turkey Border into Europe via Greece.

Not only Europe, but South Africa has also become an epicenter of Kidnapping and ransom, the culprits behind these Pakistani Syndicates is the Pakistan Intelligence Agency ISI and its staff at High Commission of Pakistan, an official delegation by the FATF Grey Listed, terrorist producing country Pakistan.

Supply of drugs, kidnapping, human trafficking, and killing of businessmen in near past has been the responsibilities of Jihadi element networks of Pakistan high commission military attaché that comprise 70% of the crimes in South Africa.

Recently Javed Jelani, a Karachi based Businessman, was kidnapped by the same group of people. This news was widely spread like a wildfire and MQM workers responded seriously to this incident and many intelligence agencies around the world were contacted by MQMs South Africa. Responsible FBI and HAWKS assured their cooperation to pursue the incident, they jointly raided different parts and cities of South Africa in search of the hostage MQM workers, South African Secret Agencies, the American FBI and the South African Muslim community extended their complete support and finally recovered the victim from an area in Johannesburg.

Recently 5 Pakistani Intelligence Agency ISI trained Operatives including a Somali and an Ethiopian and 3 Pakistanis linked to kidnapping, extremism syndicate of IS and New Year’s Eve Melville terrorist shooting were arrested in a Kliprivier house south of Johannesburg.

Pakistan is already in the Financial Action Task Force (FATF) Grey list and is undergoing scrutiny. However more and more terror links of Pakistan are getting exposed now.

Can this murder of the Human Rights Actvist Karima Baloch, who was very vocal against Pakistan Army and Pakistan Intelligence Agency ISI, possible without the knowledge and involvement of Canadian Authorities?

Isn’t Justin Trudeau’s version of Democracy in Canada for only for name sake however it does everything West doesn’t represent?