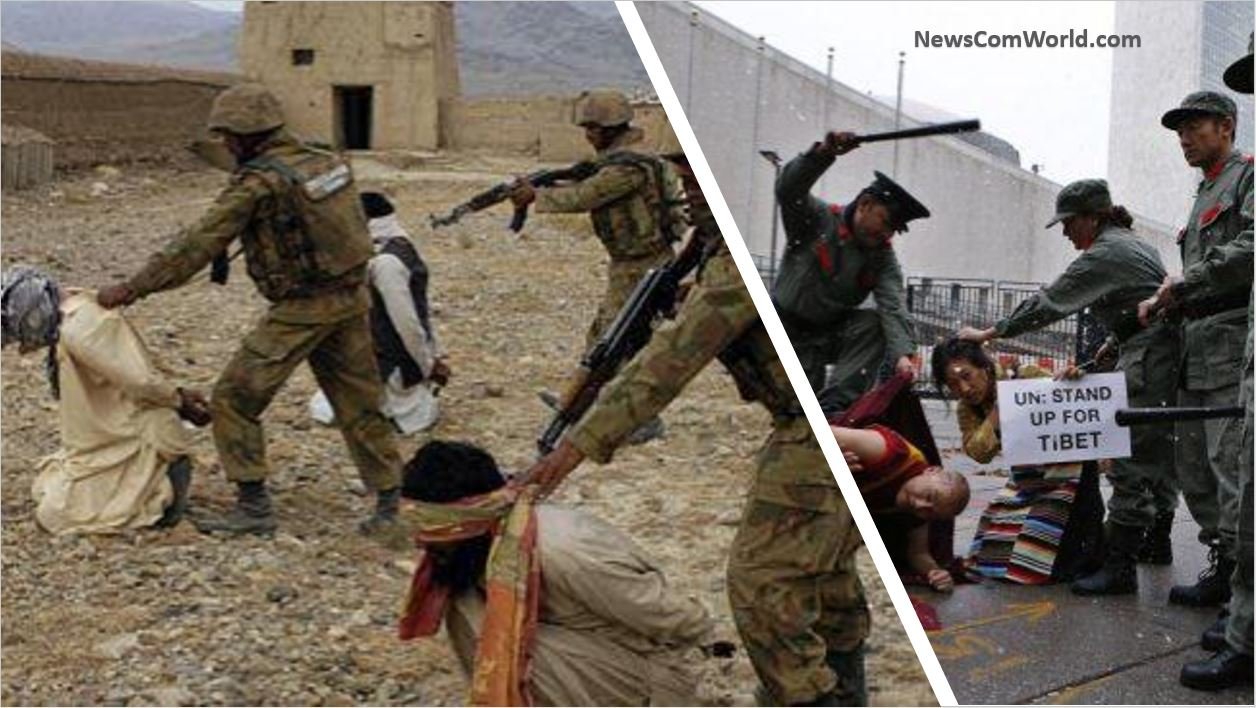 Pakistan submitted its “Note verbale” dated 18 June 2020 for the Permanent Mission of Pakistan to the United Nations addressed to the Secretary-General.

If you read that you will find it is totall false and concealment of facts. We are reproducing the Para 4 of the Annex to the note Verbale for our readers to look at the hypocricy of Pakistan

Para 4 reads, “Pakistan has made consistent progress in promoting and protecting human rights at home and abroad. This commitment is rooted in our Constitution and driven by the imperative of our functional democracy, improved rule of law and respect for human rights and fundamental freedoms. These ideals are further guided by the vision of our founding father, Quaid-e-Azam Muhammad Ali Jinnah, who said, “We are the equal citizens of one State.” The Constitution of Pakistan lays down the basic human rights framework by guaranteeing fundamental freedoms and civil and political rights and also provides for the progressive realization and enforcement of economic, social and cultural rights. This is supported by our efforts to strengthen the institutional framework for the realization of human rights at all levels.“

As you can see that Pakistan that is one of the murderers of Human Rights that has disappeared and killed over a million Baloch, Pashtuns, Mohajirs, Sindhis and either sold them for organ harvesting or killed them calls itself promoting and protecting Human Rights.

Pakistan ISI recently organized Protests by Sunni Muslims against Shia minority only in Pakistan Occupied Sindh and no where else in Pakistan. Why? We covered it in our previous article. Sindhis and Mohajirs that are largely Shias are fighting for Independence of Sindhudesh from illegal occupation of Punjabi Pakistan. In order to threaten them the Pakistan Intelligence agency ISI organized protests in Karachi.

In illegally occupied Balochistan, Pakistan is doing the Ethnic cleansing of native Baloch nationals. Pakistan has disappeared lakhs of native Baloch and their families also do not know whether they are alive or dead.
Related Article EXPOSED: Pakistan Army Doing Organ Harvesting After Enforced Disappearance Of Ethnic Baloch, Pashtuns And Muhajirs

Authorities have repeatedly used enforced disappearance as an insidious form of extra-judicial punishment, silencing and intimidating political activists, religious minorities, and numerous others. Despite the protestations of Pakistani officials, cases of enforced disappearance are neither rare nor incidental; as of March 2019, the Commission of Inquiry on Enforced Disappearances recorded 2178 unresolved cases.

In one emblematic case, human rights defender Idris Khattak was forcibly disappeared in November 2019. In a cruel twist of irony, Idris had spent years working to shed light on enforced disappearances in the country. After a sustained public outcry, the Pakistani government acknowledged custody of him but refused to reunite him with his family or charge him with a crime. Idris has yet to be granted access to his lawyer.

No one has ever been punished for taking part in an enforced disappearance in Pakistan.

In the same statement Amnesty International said, “Blasphemy laws continue to pose a profound threat to many of Pakistan’s religious minorities. These laws, which broadly proscribe actions, words, or expressions that may be interpreted as insulting to religious sensibilities, are broad, vague, and coercive. At varying times, they have provided license for the government to persecute religious minorities or for violent mobs to harm them. In one famous case, Asia Bibi, a Christian farm worker, was sentenced to death for blasphemy in 2010. Eight years later, Pakistan’s Supreme Court acquitted her of all charges. While Asia Bibi has since left the country, her attorney continues to face threats and abuse. The Governor of Punjab Salman Taseer was shot and killed by his bodyguard in retaliation for publicly defending her.”

In the same report, Amnesty International further exposed Pakistan on discrimination against minority Shias, Hazaras, Ahamadiya Muslims. Amnesty International stated, “Muslim minority denominations have not been immune from discrimination and violence. In 2018, an MIT-educated economist was removed from the Prime Minister’s Economic Advisory Council after the government faced sustained pressure for appointing him due to his Ahmadiyya faith. Members of the Shi’a Hazara community of Quetta have been the target of violence, including during a bombing in April 2019 which killed at least 16 people.”

In its previous report dated 27 March 2019, Amnesty International called upon the Pakistan government to:

Ensure that all measures are taken to immediately end the practice of enforced disappearance.

Immediately disclose the fate or whereabouts of victims of enforced disappearance to their families.

Either immediately release the victims of enforced disappearance or ensure that they are brought promptly before a judge in a civilian court to rule on the lawfulness of their arrest or detention and whether they should be released.

If people continue to be detained, ensure that they are charged with an internationally recognizable offence and that their rights, including to a fair trial are fully respected.

Consult civil society and families of the disappeared on the draft bill to criminalize enforced disappearance and ensure that the offence is defined in accordance with international law and standards.

Ratify and implement into national law the International Convention for Protection of All Persons from Enforced Disappearance, including making declarations, pursuant to Articles 31 and 32 of the Convention, recognizing the competence of the Committee on Enforced Disappearance to receive and consider communications from individuals and states parties.

Ensure that all allegations of enforced disappearance are promptly, thoroughly, effectively, independently and impartially investigated and, where sufficient admissible evidence exists, prosecute those suspected of criminal conduct irrespective of their rank and status or the security agency they are affiliated with through fair trials.

Ensure all victims, including family members are provided with full and effective reparation to address the harm that they have suffered.

Prior to that in another report dated 6 November 2017 also Amnesty International in it report said that it is alarmed by reports it has received of a wave of enforced disappearances that have taken place over recent days, particularly of activists in the southwestern province of Baluchistan, and calls upon the Pakistani authorities to immediately carry out independent and effective investigations with a view to determining the fate and whereabouts of all missing people.

In our previous article Stepped-Up Surveillance By CCP China In Tibet And Gross Human Rights Abuses we covered in details how China has stepped-up surveillance and censorship policies and campaigns to further deteriorate human rights situation in the PRC.

Tibetans in and out of China occupied Tibet are not only censoring themselves, they are censoring each other because Chinese authorities have made censorship the responsibility of the whole populace. Various methods of mass surveillance such as the “Grid Management” and “Double-Linked Household” systems obligate individuals to report suspicious activity and betray one another or face consequences.

Chinese authorities rely on a strict and pervasive disciplinary machine to punish individuals it sees as a threat, which has resulted in extraordinarily high level of mutual self-censorship among Tibetans. The power of the Chinese Party-State’s influence relies on a combination of basic surveillance and control instruments, a hierarchized system of monitoring and observation and distributed responsibility, and a normalization of fear, judgment, and social distrust.

The changes in China Occupied Tibet over the last decade represent a systematized social control mechanism that ignores human rights such as the freedom of speech, religion, and peaceful assembly. Online surveillance, CCTV cameras, bugged homes, and checkpoints provide simple instruments of observation and monitoring to expand the influence of the state. This ensures a maximum number of points of contact between the state and the Tibetan people through which power and influence can flow.

China officially has the broad power to quash unrest in Hong Kong, as the country’s legislature recently unanimously approved new security laws, a plan to suppress subversion, secession, terrorism and seemingly any acts that might threaten national security in the semiautonomous city.

People have not forgotten the Chinese Massacre on students in Tiananmen Square. Besides that Another massacre took place in Chengdu. We covered it in details in our previous article Chengdu Massacre that happened in Parallel to Tiananmen Massacre

Don’t you think it is fishy when the Murderers of Human Rights are elected as members to United Nations Human Rights Council?

Doesn’t it raises the question on the relevance of United Nations itself? Does that mean Chinese influence on United Nation and its bodies is so much that money and favors can buy the votes and can give clean chit to the murderers?