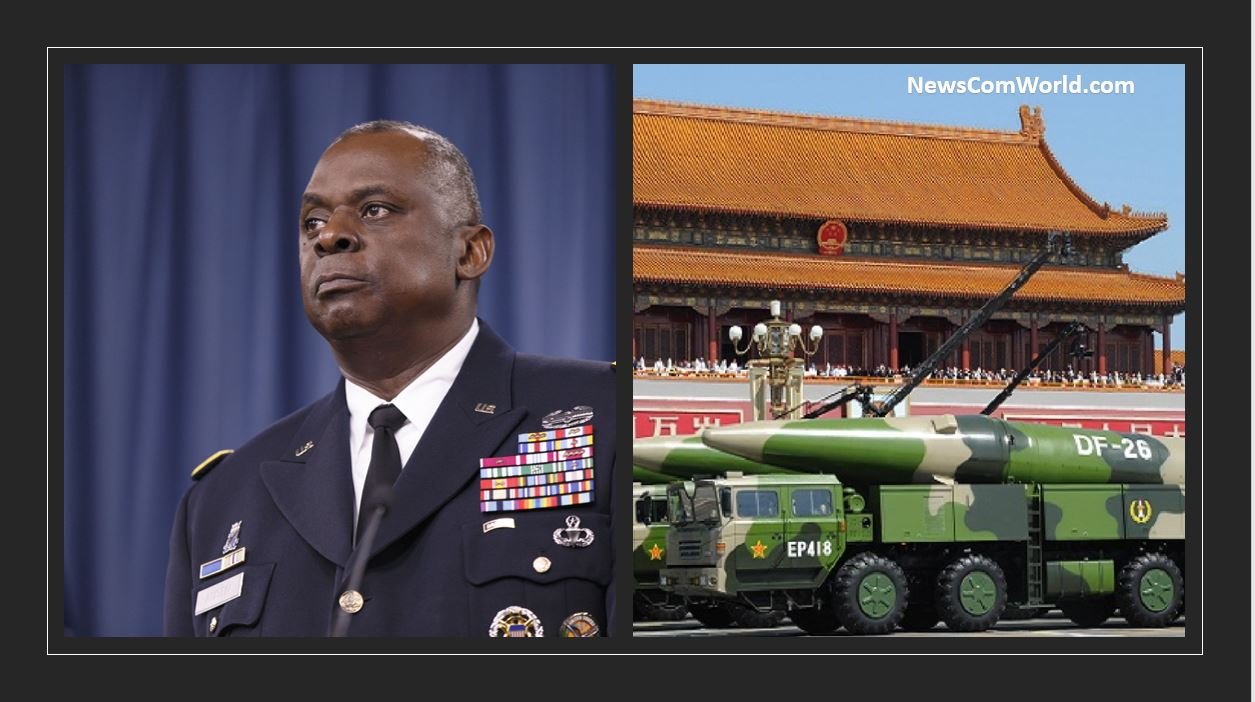 As per a report, Newly appointed US defence secretary Lloyd Austin has called on key Asian allies to work with the United States in the Indo-Pacific, part of efforts to boost defence ties in the region as its intense rivalry with China looks likely to continue.

Austin, who was sworn in on Friday, did not name China but said the US opposed “any unilateral attempts to change the status quo in the East China Sea” and reaffirmed to his Japanese counterpart Nobuo Kishi that the US military would respond to any attack on the Senkaku Islands under the US-Japan security treaty. The Senkakus are uninhabited islets in the East China Sea controlled by Japan but claimed by China and known as the Diaoyu Islands in Chinese.

It was the first high-level phone call between Japan and America since US President Joe Biden took office and Austin urged Kishi to “strengthen Japan’s contribution to the role the alliance continues to play in providing security in the Indo-Pacific region”, the Pentagon said on Saturday.

In a call on Sunday, Austin told South Korean counterpart Suh Wook that close cooperation between the two allies was important, and the two sides “affirmed the importance of maintaining the rules-based international order, and agreed to enhance cooperation on shared threats”, the Pentagon said.

The two calls followed a phone conversation between new US national security adviser Jake Sullivan and his South Korean counterpart Suh Hoon on Friday, when Sullivan said the South Korea-US alliance was a “linchpin” of peace and security in the Indo-Pacific region.

The exchanges with America’s most important allies in Asia come as the Biden administration, in response to China’s geopolitical posturing, is moving to renew the US alliance network.

While Austin is believed to lack experience in the Indo-Pacific, he has pledged to focus strategically on China and Asia. In his confirmation hearing last week he said mending alliances and focusing strategically on China would be high on his agenda. The retired four-star army general and former commander of the US military effort in Iraq is the first African-American to serve as defence secretary.

Chinese observers said the calls suggested the Biden administration would seek to counter Beijing’s growing influence in the region through its alliance network.

“The pressure may not be limited to the military sphere but could extend to China’s relations with its neighbours in Southeast Asia, which are now a high priority in its diplomatic strategy,” Chen said. “The South China Sea may also become an issue in China’s bilateral relationships.”

“It could target countries like Japan, South Korea, the UK and even Australia and India,” Song said.

Military tensions between China and the US have continued to rise in the first few days of the Biden administration. On Saturday, the US Indo-Pacific Command said a US aircraft carrier group led by the USS Theodore Roosevelt entered the South China Sea where it was “conducting maritime security operations, which include flight operations with fixed and rotary-wing aircraft, maritime strike exercises and coordinated tactical training between surface and air units”.

Chinese foreign ministry spokesman Zhao Lijian on Monday said the US frequently sent aircraft and vessels into the South China Sea to “flex its muscles” and that this was “not conducive to peace and stability in the region”.

“It can be expected that during the presence of the aircraft carrier Roosevelt in the South China Sea, all kinds of US military aircraft activities will continue,” the think tank said on Weibo, China’s Twitter.

Biden has not yet outlined his Indo-Pacific policy but earlier named long-time Asia expert Ely Ratner as special assistant to the defence secretary on China matters. Observers said the appointment was likely to mean a competitive approach to China.

Earlier on Saturday, Austin also spoke with British Secretary of State for Defence Ben Wallace and they “exchanged views on confronting strategic issues of mutual interest, including the Covid-19 response, concerns from a rising China, threats from Russia and ongoing operations in Iraq and Afghanistan”, according to the Pentagon.

In a move that could fuel tensions in the region, Britain has agreed for its Queen Elizabeth carrier strike group to take part in a joint deployment with the US military this year. A joint declaration signed last week enables the deployment of US Marine Corps and navy personnel and equipment – including a detachment of F-35B Lightning II aircraft and USS The Sullivans guided-missile destroyer – as part of a combined carrier strike group to be led by HMS Queen Elizabeth, according to the Pentagon.

While details of the joint deployment are not clear, British defence officials, including former defence secretary Gavin Williamson, hinted earlier that the Queen Elizabeth would be deployed to Asia and the South China Sea.

In 2019, Williamson said the region would be where China was “developing its modern military capability and its commercial power”. The comments angered Beijing, which warned London not to interfere in the region and said the South China Sea “should not become a battleground for big power competition, or a sea full of roaming warships”.

Royal Navy amphibious assault ship the HMS Albion had sailed close to the China-claimed Paracel Islands in the contested waterway the previous year, a move Beijing called “a provocative action”.

Chen said while is was likely the US would try to boost its alliances to apply pressure on Beijing, it remained to be seen how successful the strategy would be. He gave the example of South Korea, which may refrain from pushing Beijing on the South China Sea, especially given that China is the largest trading partner and closest ally of the North.

Japan, however, saw China as a strategic rival and the waterway as a critical trade and energy supply route, so would be more likely to harden its position, he said.

“China will have to step up efforts to stabilise relations with its [Southeast Asian] neighbours while pushing forward negotiations on the South China Sea code of conduct, because on this issue it is the countries in the region that really matter,” Chen said.

The US has stepped up freedom of navigation patrols in the South China Sea in recent years to counter Beijing’s ambitions in the region, calling on allies to join it. Beijing has condemned the operations, saying they complicate the situation.

Australia to spend additional $1 Billion on Navy for credible deterrence

“These new capabilities will provide a strong, credible deterrent that will ensure stability and security in the region,” Defence Minister Linda Reynolds said in the statement.

The spending is part of a previously announced defence budget increase over the next decade as the country seeks to pivot its military focus to the Indo-Pacific region amid worsening relations with China.

Reports indicate by 2030 there will be approximately 300 submarines operating in the Indo-Pacific regions.

Australia currently has only six submarines.

China Deploys Missiles on its Eastern and Western Borders

As per another report, China has deployed a large number of launchers for its new advanced intermediate-range ballistic missile (IRBM) to the country’s eastern and western areas for intensive training, as it and the United States continue their posturing over the disputed South China Sea.

Satellite images by Maxar Technologies showed the Chinese military had deployed many DF-26 IRMB launchers to a training site in Shandong province in the east, according to a report by the Washington-based Federation of American Scientists (FAS) on Thursday, adding it was the first time it had seen the DF-26 operating in the area.

Last week, Andrei Chang, editor-in-chief of the Canada-based Kanwa Defence Review, said in a YouTube video that China’s Rocket Force had deployed about 16 launchers for the DF-26 IRBM to its Qingzhou base in Shandong and another in Korla, in the far-western Xinjiang region.

Chang had said the locations put India – with which China has been involved in a months-long border stand-off – within its range and posed a threat to the United States’ naval base in Yokosuka and other military outposts in Japan.

The DF-26 IRMB is a mobile-road ballistic missile armed with a conventional or nuclear warhead with a range of 5,000km (miles).

Chang said China had built two huge warehouses for the DF-26, indicating large deployment to the border area, but Chinese military expert Zhou Chenming said the DF-26 was in Korla for training, given the “missile shooting range in the uninhabited Gobi desert”. Zhou added: “It’s not the first time the DF-26 has been there, but the first time pictured by satellites.”

Zhou said the powerful DF-26 was not needed to deal with India, while the Qingzhou base in the east was “just the rocket force’s training school”.

“But China would not deploy the DF-26 to the front line and coasts, because it would be more easily found and destroyed by the US’ ship-borne tomahawk missiles,” he said.

In a test in August, China’s Rocket Force launched a DF-26 missile from its northwestern province of Qinghai to target a moving ship in the South China Sea.

The DF-26 has previously been deployed to at least four other locations in China, according to the FAS and Chang.

Since China is deploying Nuclear Capable 5000 KM Range missiles, would US and Allies that are nuclear capable, won’t deploy long rage Nuclear Capable Missiles that can target all Chinese cities?

International community should make a note that it is China that has first started deployment of Nuclear capable long range Missiles to pose a threat and arm twist its neighbors into kneeing to Chinese Imperialism.